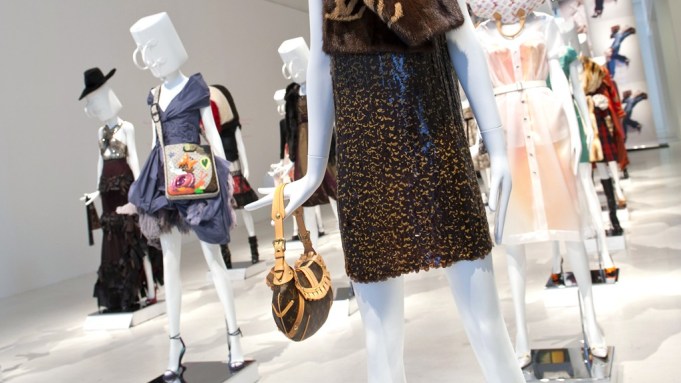 The exhibit coincides with the opening of Milan Fashion Week as well as the luxury brand’s new store in Via Montenapoleone 2, after seven months of restoration. Inspired by Peter Marino’s blueprint, the store boasts the first Salon de Haute Maroquinerie in the world and the first Travel Room in Europe.

The exhibition is a celebration of artistic director Marc Jacobs’ creativity for Louis Vuitton through the display of 30 key looks, said Pietro Beccari, the company’s executive vice president, who added the designer’s “real strength is his understanding of the brand and its history; he respects its traditions while bringing a breath of fresh air and a touch of fantasy, modernity and creativity.”

Grand, who has worked closely with Jacobs since 2003 on the styling of the brand’s fashion shows, underscored that the exhibit “is not a retrospective, we put clothes together as I would for a shoot.” As a result, she didn’t select one outfit per collection, but mixed looks designed by Jacobs since 1998. “And it all still looks very contemporary,” she said.

Grand noted that the only brief she received from Louis Vuitton was to “show all the craftsmanship.”

“I know how much care goes in each garment, I am respectful of the atelier, and looking at photos is different from looking at the actual clothes,” she said.

The designs, worn on mannequins with Speedy bags instead of heads, also highlights Jacobs’ collaboration with artists including Richard Prince, Julie Verhoeven, Stephen Sprouse and Takashi Murakami. “We humorously push the point that Vuitton is about bags. It hit me we couldn’t do a blank head, it would have been too pedestrian,” said Grand, who scoffed at the notion that the exhibition was in any way linked to the rumors surrounding Jacobs’ departure from Louis Vuitton for Dior. “It’s silly, we started working on this in January 2011,” she said.

A selection of the looks on display was first unveiled in May 2010 at the opening of the brand’s New Bond Street Maison in London.

Among the pieces in Milan are a cashmere mesh jumper from fall-winter 2000 combined with a tulle skirt from fall-winter 2004 or the coiffeuse dress in silk satin, and the Speedy Multicolor created in collaboration with Murakami from the spring-summer 2003 season. There are also six mannequins made of wood and covered with Louis Vuitton graffiti designed by Sprouse in orange and pink fluorescent colors.

The exhibition runs from Thursday to Oct. 9.

As for the company’s refurbished store, Vuitton restored the 10-year-old Milan unit in the historic Palazzo Taverna respecting the Neoclassical facade and interiors with a residential decor meant to recreate the atmosphere of a luxurious home. Covering 9,018 square feet, an additional floor was added to the three existing ones.

Entering the store, the space that was originally an inner courtyard with columns surmounted by capitals displays an homage to the Monogram handbags and other leather bags, including the collection designed in collaboration with Sofia Coppola launched in 2008. Onyx marble floors with a special effect reminiscent of the texture of leather hides, and anigre wood are standout materials on the ground floor.

This floor has double height ceilings and a skylight and includes the Travel Room, which displays all accessories and a new apparel collection dedicated to traveling. Resistant to impact, abrasion, water and temperature changes, the line is ultralight and equipped with systems for absorbing humidity and regulating body temperature. Gilded titanium shelves that look suspended in air contribute to the high-tech mood.

A staircase made of glass, marble and polished steel leads to the mezzanine. The sides of the staircase have been decorated with a gilded metal structure and with a Monogram flowers pattern.

Women’s wear is on the second floor, furnished in a sober color palette of beige and cream tones, against stuccoed walls with Monogram flowers, Forties-style furniture, glass with golden geometric patterns and archival advertisements. Two rooms are dedicated to footwear.

On this floor, the Salon de Haute Maroquinerie becomes a VIP room, with a new service of personalization of five Louis Vuitton bag styles, including the 1932 Noé and the 1958 Lock-it bag. Large swatches of hides are displayed on one wall of the room, which boasts a Louis Philippe mirror and a George Mathias table. Eight different types of fine leathers, including shiny or matte alligator skin, can be chosen by each customer in a total range of 26 colors.

A glass, steel and wood staircase leads to the basement with a gentlemen’s club mood: darker colors are used for the cumaru wood floors and the boiseries as well as for the sofas and low tables in leather.

The space on the left is dedicated to ready-to-wear while the large area on the right, designed to resemble the interior of a Louis Vuitton shoes trunk, is devoted to men’s shoes, including the new Made to Order Shoes service, with six models and eight different types of leathers.