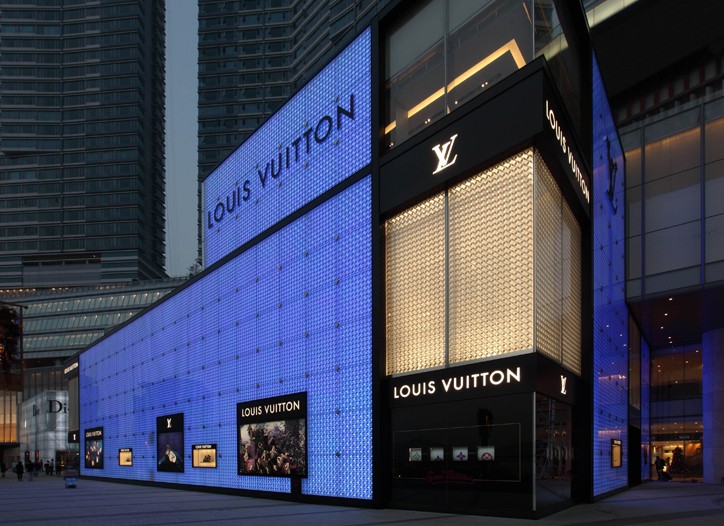 MACAU — Louis Vuitton, wagering that Macau’s retail outlook is golden, has opened a new Maison here — the brand’s seventh Maison in the world and its fourth store in this former Portuguese colony.

The three-story unit is connected to One Central Mall, a new Hongkong Land retail development that will officially open this weekend and feature luxury stores, including Gucci, Hermès, Tod’s, Kenzo and Ralph Lauren.

Despite recent figures that show small declines in retail sales here, Yves Carcelle, chairman and chief executive officer of Louis Vuitton, expressed optimism about potential business in the city. “With the development of the Mainland Chinese market for luxury, especially for Vuitton, we see a huge development in Macau. The swine flu and some political elements reduced the traffic somewhat, but the number of hotels and the development of the city is strong,” he said.

There were more than 30 million visitors to Macau in 2008, over half from Mainland China. But 2009 is not looking so rosy. Recently, authorities of neighboring Guangdong Province restricted its citizens’ travel to one visit every two months. Tourist arrivals to the city are down 9.6 percent in the first eight months of this year. Carcelle, however, remains nonplussed. “From what I understand, the government doesn’t want to prevent people from coming to Macau, but they want to prevent them coming every week,” he said. “There was a period of time it decreased the number of travelers, but in a funny way, it’s better if it grows steadily — so that infrastructure is in place. We like growth, but it has to be controlled. I prefer a natural growth, then things are done well.”

Carcelle declined to forecast sales for the new Maison, which spans 5,356 square feet and offers panoramic views of Nam Van Lake, Macau Tower and the city’s iconic casinos. Its facade, one of the largest in the Louis Vuitton retail network, covers a 5,249-square-foot surface made of 50,800 backlit flowers inspired by the Louis Vuitton Monogram floral motif. There are multiple entrances at street level as well as from the mall, on all three levels.

“In order to have a Maison, you have to have space — you cannot squeeze one product category,” said Carcelle, who noted it was relatively easy to design this site as the company worked with the mall’s developers from the outset. “You have to warn any landlord [about] Vuitton,” joked Carcelle. “We always ask, ‘Where is the next expansion?’”

On the ground floor of One Central Maison, shoppers encounter the “Men’s Universe” that is made up of dedicated areas for shoes, ready-to-wear, accessories and the first men’s Bag Bar. Dark wood floors, deep-toned rugs, rich veneer panels and chrome fixtures provide a masculine ambience throughout the area, which also features multiple seating zones for a “lounge effect.” This floor also houses the first “Travel Room,” which showcases a collection of trunks, luggage, satchels and travel books, and is highlighted by a 103-inch video screen that projects satellite images of Vuitton’s “Maison” cities around the world.

The staircase at the center of the floor leads to a two-story-high mezzanine, which features a 28-foot-long Bag Bar for women. Here, the interior begins to brighten, thanks in part to lots of natural light and the use of white stone flooring and bronze elements in the shelving and fixtures. A women’s accessories room adjoins the area and leads to the watch and jewelry salons.

The entire second floor is the “Women’s Universe,” showcasing rtw, handbags, small leather goods, shoes and accessories each in a dedicated zone. There are white lacquer panels, chrome and brass fixtures, and a curtain of stainless steel rods.

In every Maison, Louis Vuitton devotes space to art and to a VIP suite. In Macau, these two elements can be found on the third floor. The exhibition space, designed like the SoHo unit in New York, features white walls and an open area for display. On show for the opening are a number of game-related creations — including Monogram backgammon, mah-jongg and chess sets, and a special order portable casino — as well as commissioned artworks, such as Liu Jianhua’s “Unreal Scene,” a city sculpture of Macau crafted from poker chips and dice.

The VIP salon, designed by Yabu Pushelberg, features plush carpets and furnishings, a library, walls inlaid with mother-of-pearl, and a private patio — the first time a Louis Vuitton store has a terrace. This one measures 640 square feet, including a private dining area. “We didn’t know the use of the terrace — it’s such a treat to keep it, and the view is amazing,” said Carcelle. “How many luxury stores in the world can have a terrace with views like that?”

Like many others, Carcelle sees Macau’s future developing along the same lines as that of Las Vegas. “Fifteen to 20 years ago, people went to Vegas purely for gambling. Now they come because it’s entertaining. Macau will continue to create this kind of environment so the gambler and the gambler’s family can have a moment of excitement.”

In the meantime, expect further Louis Vuitton openings. The Las Vegas Maison opens in two days at City Center, which — just like the One Central mall in Macau — is attached to new MGM Grand and Mandarin Oriental hotels. Singapore, which is marking the opening of one Louis Vuitton store and the expansion of another this week, will have its own Maison in early 2011. Carcelle hinted it will be “underwater” and located at Marina Bay, where three casinos are in development. The brand will also expand in Vietnam. China is also slated for more stores.

“There are still new towns we don’t cover yet, but probably next year we’ll open three new cities and two more stores in Shanghai — before the World Exhibition,” said Carcelle, who believes so much in the future of the region he has his four-year-old son taking Chinese lessons. “Someone in the family should learn Chinese,” he said.