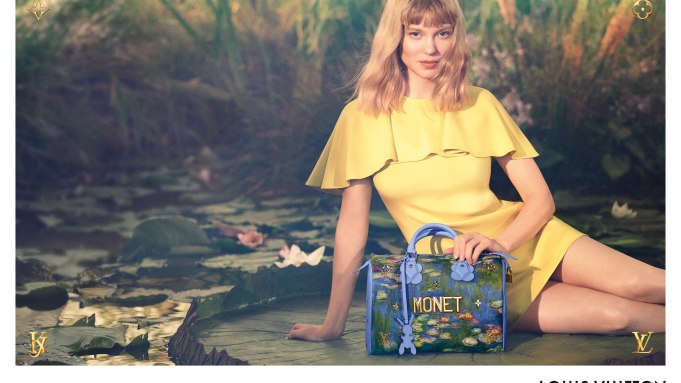 PARIS — For the second chapter of its handbag collaboration with Jeff Koons, Louis Vuitton has co-opted two icons of French Impressionism: Claude Monet and Édouard Manet.

The new installment of the Louis Vuitton Masters collection, due to go on sale in 150 Vuitton stores worldwide on Oct. 27, will feature prints of paintings including Monet’s “Water Lilies,” on show at the National Museum of Western Art in Tokyo, and Manet’s “The Luncheon on the Grass,” now in the Musée d’Orsay in Paris.

“Manet has always been one of the most important artists to me. To work with the image of ‘The Luncheon on the Grass’ gave me the opportunity to emphasize the importance of artists giving it up to each other,” Koons said in a statement.

“Within ‘The Luncheon on the Grass,’ Manet is referencing Titian’s ‘Pastoral Concert,’ as well as [Marcantonio] Raimondi’s engraving ‘The Judgment of Paris,’ which was based on a drawing by Raphael. It’s a history of humanism, of artists enjoying each other’s work and learning to find their way through each other,” he added.

One of the bags featuring Monet’s painting appears in an advertisement for the collection starring Léa Seydoux, one of Vuitton’s brand ambassadors, perched on a giant water lily.

“Monet’s ‘Water Lilies’ is one of the most beautiful, sensual images of nature. It is an image that plays between appearing concrete and at the same time breaking down and becoming completely ephemeral,” noted Koons.

The other works featured are “Delightful Land” by Paul Gauguin, “Ancient Rome” by J.M.W. Turner, “Reclining Girl” by François Boucher and “The Triumph of Pan” by Nicolas Poussin — the latter available exclusively in Vuitton’s new flagship on Place Vendôme in Paris. “They are part of my DNA,” Koons said of the paintings.

The Masters collection of bags and small leather goods follows in the footsteps of Vuitton’s previous collaborations with art world stars including Yayoi Kusama, Takashi Murakami and Richard Prince.

While the collaboration was launched in April with a celebrity-packed dinner in front of Leonardo da Vinci’s “Mona Lisa” at the Louvre museum, Koons plans to celebrate the second installment with an intimate event cohosted by Dasha Zhukova at his studio in New York on Thursday.

The Vuitton project is designed to illustrate the unspoken links between major artists — a theme that Koons previously explored with his “Gazing Ball” paintings shown at the Gagosian Gallery in New York in 2015, which featured reproductions of famous works including the “Mona Lisa.”

The handbags, meanwhile, are inlaid with the artist’s version of the house’s monogram motif, featuring his initials alongside those of the brand, with the painters’ names emblazoned on the front of each bag in metallic block letters.

The bags also feature his signature on the back, as well as a tag in the shape of an inflatable rabbit, a reference to one of his most well-known sculptures.

At the time of the launch, Michael Burke, chairman and chief executive officer of Louis Vuitton, said the collaboration was about bringing art masterpieces to a new audience.

“It’s really about rediscovering the masters. We’re telling a five-, six-century-long story of Western pictural art, starting with the Italian Renaissance, and we think it deserves to be better understood,” he said.