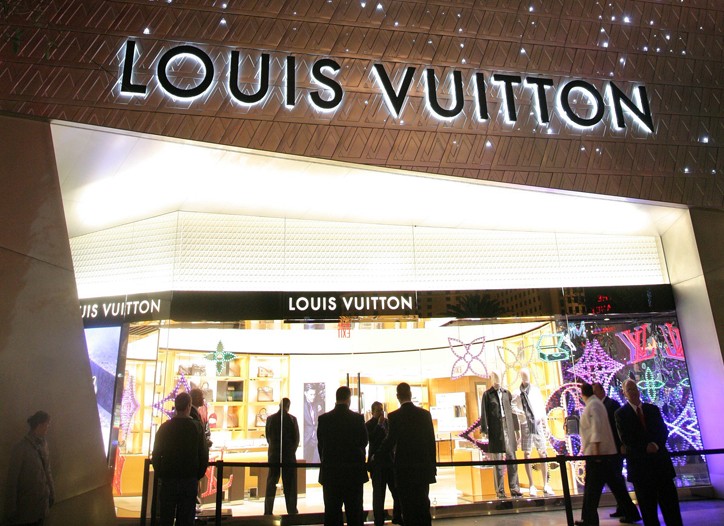 The facade of the 33,000-square-foot flagship is covered with 4,000 LED lights that are used for light shows along the Las Vegas Boulevard frontage from dusk until dawn, and the front windows have fluorescent neon display lights.

Vuitton launched its third Las Vegas store last week as the gambling and entertainment mecca struggles with fallout from economic turmoil, which has hurt tourism and retailers — particularly in the luxury sector.

“The whole idea of the store is to reflect Las Vegas, to appeal to the local clientele and visitors,” said Daniel Lalonde, chief executive officer of Louis Vuitton North America. “Las Vegas is a very important market for any luxury brand. There are so many international travelers who come here.”

Vuitton is the biggest store at the 500,000-square-foot Crystals, joining Tom Ford and Tiffany & Co., which are also open, and Hermès, Versace, Prada, Dior, Cartier, Bulgari and Gucci, among others, set to launch next year. CityCenter will formally open on Dec. 16.

Although Vuitton and other luxury retailers in the Las Vegas market have multiple doors on the Strip, executives maintain there is room for them.

“We see each hotel and casino as a city within a city, and the operators’ strategy is to keep guests on the premises, like a little island,” Lalonde said. “Visitors and guests of one property, like CityCenter, may not go other places to shop.”

Lalonde said the brand “weathered the storm” of the $11 billion CityCenter’s difficulties and delays because of the belief the Crystals store will be a top performer.

“We went through the ups and downs of, ‘Is it going to happen? Is it not going to happen?’ but we stuck with it and were committed to the project because we felt it was so important,” Lalonde said. “You have to protect your brand and its value, but you don’t want to miss important opportunities like this. We think someone coming to Las Vegas will want to visit CityCenter even to appreciate it from a design standpoint.”

Leather goods such as handbags and wallets dominate the store’s floor space, with bag bars on the first and third floors and an area dedicated to fine jewelry and hand-painted customized luggage and other leather goods.

Vuitton has provided floor space for Las Vegas-themed merchandise and displays, such as a branded “Malle Casino” gaming chest that contains a roulette wheel, cards, dice and other gambling paraphernalia.

It is one of just 16 North American doors that carry Louis Vuitton’s ready-to-wear apparel.

In each Maison, Vuitton dedicates space to art and private VIP suites; the Crystals flagship has an installation of multicolored cubes by Belgian artist Lionel Esteve suspended from the ceiling of the store’s entrance.

The opening was celebrated last week at a private dinner prepared by chef Michael Mina for about 50 guests, including executives from MGM Mirage, a partner in CityCenter with Dubai World. The state-owned holding company is in talks to restructure an estimated debt of $26 billion.

The CityCenter development came close to bankruptcy. A hotel tower and some condominiums were scrapped. In October, Kirk Kerkorian, MGM’s largest investor, said he would explore partnerships and other options for his 37 percent stake in the company, and MGM Mirage said the same day it would take a $955 million hit to its third-quarter earnings to reflect the falling value of CityCenter.

“This was a long road and the completion of CityCenter is a testament to belief in the Las Vegas market,” said MGM Mirage ceo Jim Murren. “We think it will reinvigorate the Strip and are lucky to have a group of retailers that shared our vision.”