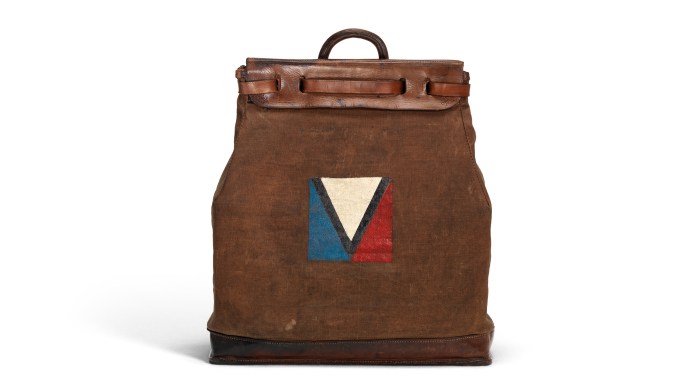 PARIS — A saffron-colored 1929 Citroën delivery vehicle, its roof stacked with trunks, will be an unusual sight when it begins circulating Tokyo streets this week.

Louis Vuitton recently purchased one of the rare vehicles, restored it and shipped it by boat to the Japanese capital to help draw attention to its “Volez, Voguez, Voyagez” exhibition.

The sprawling showcase — which welcomed an estimated 200,000 visitors during its initial three-month run at the Grand Palais in Paris this past winter — is touching down in Tokyo, where it will welcome the public free of charge from April 23 to June 19.

Housed in a bespoke, boxy structure in the Kioicho neighborhood, home of Vuitton’s first store in Japan back in 1978, the exhibition decrypts more than 160 years of history of the storied trunk-maker-turned-leather-goods powerhouse, dedicating one of 10 thematic “chapters” to Japan — an addition from the Paris leg.

While most people assume that the Japanese first discovered Vuitton in the Sixties, after travel bans were lifted and Western brands became a popular fixation, Burke and exhibition curator Olivier Saillard discovered a client card from 1883 for Itagaki Taisuke, a Japanese politician and leader of the Freedom and People’s Rights Movement, the precursor to one of Japan’s first political parties. Burke explained that Itagaki traveled to France to study Western democracies, where he discovered Vuitton, founded in 1854.

“We were able to get one of his suitcases and it will be on display,” he noted.

It’s well documented that George Vuitton winked to a craze for all things Japanese in France around the turn of the century when he created the brand’s brown-and-gold monogram canvas, some of the flower shapes reminiscent of cherry blossoms. Yet the exhibition amplifies the monogram’s likeness to Japanese family crests, which hold strong emotional sway and helped fan the island nation’s affection for Vuitton’s leather goods.

“Thirty or 40 years ago, most people who entered a luxury store were put off,” Burke said. “It’s really the Japanese approach to impeccable service that transformed the industry.”

While Japan is one of Vuitton’s most established foreign markets — with 50 stores across the country, including 15 in Tokyo — Burke waved off the suggestion that the brand had maxed out its expansion potential there, especially with surging tourism from neighboring China and other Southeast Asian countries.

He also noted that Japan has become a “much more open society” and is undergoing a “generational shift” in attitudes toward luxury and consumption.

Japanese nationals represent Vuitton’s number-three clientele, after Chinese and Americans, underlining that the brand needs to innovate — and animate the market.

Burke noted that Vuitton continued to upgrade and expand in the country even when “Japan was in a funk, and everyone had written off Japan.” In recent years, the company opened a store in Nagoya and a refurbished unit in Matsuya Ginza, putting it in a strong position for the new wave of tourism. Upcoming projects include renovated or relocated stores in Osaka and Hokkaido.

Most of the Tokyo exhibition closely resembles the original Grand Palais display, including a meticulously recreated train carriage and the opening room dedicated to wood, the humble material at the root of the trunk maker’s early success.

Among objects on display in the Japanese room of the exhibition are makeup and tea ceremony trunks for kabuki actor Ebizo XI, and specially commissioned hairbrushes, made with sintering polyamide powder and Japanese paper by craftsmen from Villa Kujoyama in Kyoto.

A trailblazer in Japan, Vuitton bills itself as the first European fashion firm to open a directly operated store, bypassing big trading companies. It was also an innovator in teaming with Japanese cultural figures. During the Marc Jacobs era, Vuitton famously collaborated with Japanese artists Takashi Murakami and Yayoi Kusama on monogram leather goods, while its current artistic director of women’s collections, Nicolas Ghesquière, is another Japanophile. Inspired by manga, he cast Lightning, star of the video game “Final Fantasy,” for his spring 2016 ad campaign.

Burke and Bernard Arnault, chairman and ceo of LVMH Moët Hennessy Louis Vuitton, are to host an opening celebration for the exhibition on April 21. David Ponzo, who joined Louis Vuitton Japan late last year from Swatch Group in Asia, will also be present.