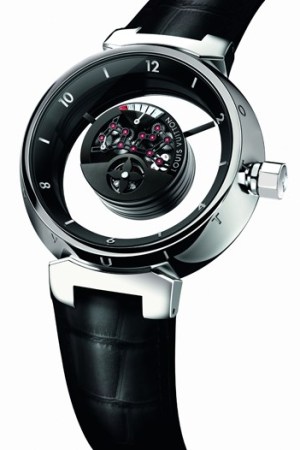 The star of the new watches, which were unveiled in the company’s Manhattan headquarters on Tuesday, is the Tambour Mystérieuse. Priced at about 200,000 euros, or $265,000 at current exchange, the watch has a round dial and is comprised of a mechanism that is encapsulated by two sapphire crystal discs, allowing the watch itself to float within the bezel framing it.

With an eight-day, eight-hour power reserve, the unisex watches are available for custom order with options such as monogramming the second hand with the wearer’s initials, selecting gemstones to place on the platinum, white, yellow or red gold case, and straps which come in any leather.

The watch is the first Vuitton has created completely in-house, from conception to completion at its La Chaux de Fonds factory in Switzerland. Five years ago, the brand launched a tourbillon which was assembled in-house, but the parts came from outside workshops.

Each of the Tambour Mystérieuse watches, which take roughly a year to make, comes in a miniature Vuitton trunk and will be shown to customers in the fall on a one-on-one basis.

“We sell about one tourbillon a month,” said Albert Bensoussan, the firm’s director of watches and jewelry. “It’s not that we don’t have the demand for more, but there aren’t enough watchmakers to create these masterpieces.”

The company also unveiled its Tambour styles in a steel and gold run. They range from 6,200 to 8,000 euros, or $8,224 to $10,612. Several of the dials from the new watches feature Vuitton’s monogram logo in creative and colorful depictions, while the natural rubber straps of the watches are pressed with either the LV monogram or the Damier check and come in a variety of colors. The new collections start at 2,250 euros, or $3,382, for the Tambour Lovely Cup, which comes with either a mother of pearl or black lacquer dial and the option of diamonds.

The steel and gold styles will hit stores this month, and the rest will be available at Vuitton watch and jewelry shops around the world later in the spring. Vuitton jewelry and watches are sold only within its exclusive boutique network. There are 25 stores that sell the watch and jewelry collection in the U.S.

“We are not averse to what’s going on in the market,” he said. “But we are in direct contact with our consumers, so we know what sells and what does not sell right away.”