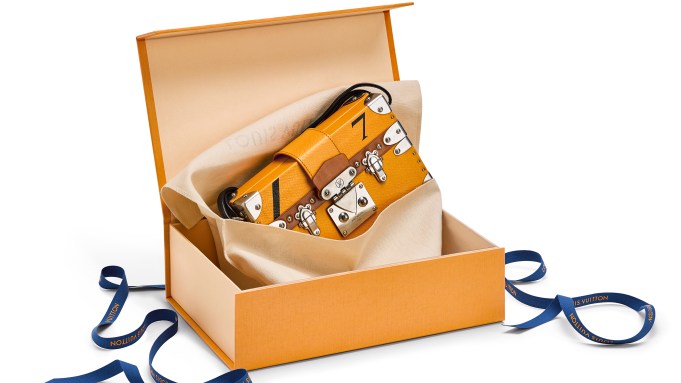 It started arriving over the weekend in tandem with a new rolling suitcase designed by Marc Newson that will be carried in 130 doors. The packaging should be present in the 180 locations that will carry Vuitton’s new perfumes, debuting in early September, and then roll out to all 450 stores worldwide, according to Michael Burke, chairman and chief executive officer of the leather goods giant.

“We don’t want the packaging to be fashionable. It’s supposed to have quite a long life cycle,” he said. “In most cases, brand colors play off of black and white. We wanted to be different.”

The brighter shade, with boxes and bags set off with blue ribbon wrapping and handles, replaces the chocolate brown packaging that has been synonymous with Vuitton since 2003. Burke allowed that the brown, while chic, was “a tad masculine” and not as joyful as the new color scheme.

He noted that the saffron shade has been woven throughout Vuitton’s history and “kept popping up.” For example, it features on a vintage trunk known as the Citroën, commissioned by the French carmaker for an expedition in 1924.

The shade is also reminiscent of the natural leather Vuitton has used for handles, labels and trim since 1860, especially after a year or two of use. According to Vuitton, the blue was used for personalization details such as initials since the brand was founded in 1854, and on ribbons for several decades.

Burke noted that a saffron-colored trunk appeared in a recent campaign with actress Alica Vikanker, one of the French brand’s ambassadors.

The new bags are made with thicker paper for greater resilience, and boxes come in collapsible formats for easier — and more environment-friendly — shipping.