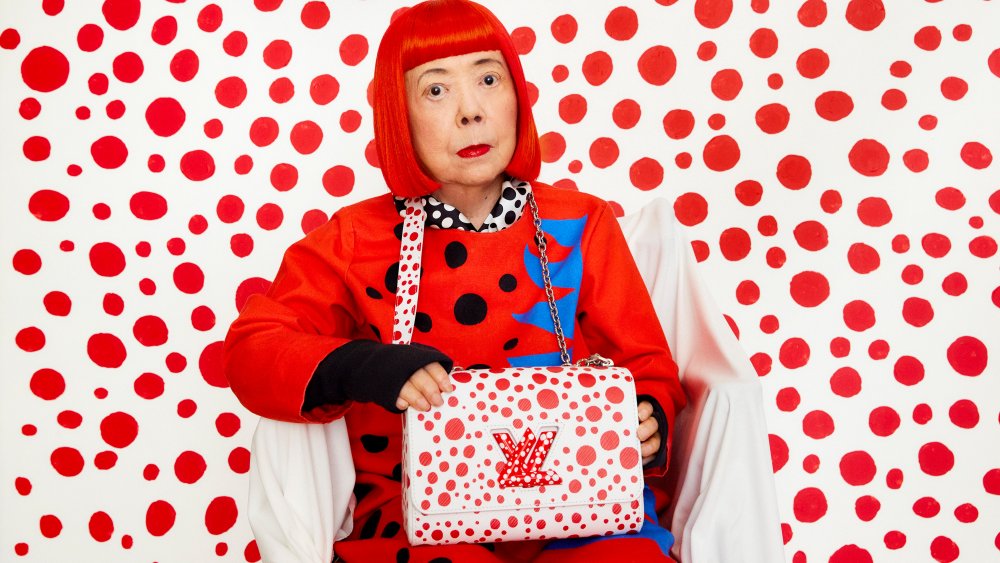 Louis Vuitton is going dotty — on a global scale.

In its most extensive collaboration with a fine artist to date, the luxury giant is rolling out ready-to-wear, leather goods, accessories and even perfumes done in collaboration with Yayoi Kusama, along with dedicated campaigns and a host of high-profile activations.

Steven Meisel’s images of Gisele Bündchen, Liya Kebede, Devon Aoki, Christy Turlington, Anok Yai and other famous models break on Dec. 26 in Japanese fashion magazines. The first products drop on Jan. 1 in Japan and China, considered a pre-launch, and should be in all 460 Louis Vuitton boutiques worldwide on Jan. 6.

Delphine Arnault, who as Vuitton’s executive vice president supervises all of its product-related activities, described the collaboration as a meeting of two like-minded design studios and workshops obsessed with perfection in concept, execution and craft.

In an interview at Vuitton headquarters in Paris, with its staggering views of the Seine River, Arnault said the project was a year and a half in the making, conceived and realized in the midst of the coronavirus pandemic via Zoom and file-sharing technology linking the French capital and Tokyo, where the 93-year-old artist is based.

“One of the aspects of her work is happiness, and we thought it would be really refreshing after the pandemic to have the worlds of Vuitton and the world of Kusama meet again,” she said, alluding to an initial, successful first collaboration in 2012.

Vuitton began teasing the latest hookup last May, when Nicolas Ghesquière, the brand’s artistic director of women’s collections, accessorized some of his cruise 2023 outfits with polka-dot handbags.

The pace has quickened in recent weeks. A Tokyo takeover involved landmarks such as the Tokyo Tower, Zojoji Temple and Tokyo station with a mix of physical installations and augmented reality activations.

“The reaction was amazing,” Arnault enthused.

Indeed, an Instagram post of the anamorphic billboard Vuitton installed in Tokyo’s bustling Shinjuku district has racked up more than 10 million views. It depicts Kusama peering out from a decorated Vuitton trunk with some animated fruit friends.

Meanwhile, other posts on Instagram, where Vuitton counts more than 50 million followers, have shown Kusama handing spotted gourds to Dutch model Rianne Van Rompaey, one of the campaign faces, who also appears to be standing on top of the artist’s signature bright-red bob hairstyle.

Arnault hinted at other citywide takeovers in Paris, London and New York next year. “It’s really important to communicate globally, but also do work locally,” she said, promising “some surprises” in different parts of each city, along with pop-ups, pop-ins, augmented reality features and even a gaming app.

A second drop of products is scheduled for March 31, to be backed by another ad campaign still under wraps.

Kusama is best known for her obsession with polka dots, which she has painted since age 10 and applied to canvases, tree trunks, entire rooms and even people. She has also done collages, soft sculptures and performance art.

Known for her exacting approach — each dot in her “infinity” paintings is painstakingly placed — Kusama is a prolific artist who has had a hand in the conceptual, feminist, minimalist, surrealist, pop and abstract art movements since her first appearance on the scene in the 1950s.

Huge lines form whenever museums feature one of Kusama’s “Infinity Mirror Rooms,” which allow viewers to gaze upon endless reflections of colorful lights.

Arnault marveled that Kusama’s art has been so prescient of today’s appetite for immersive experiences, and works that are so irresistibly Instagrammable and shareable.

The Vuitton collaboration encompasses Kusama’s “infinity dots” and metal dots, first introduced in 1966, along with floral and pumpkin motifs.

Arnault pulled out a Capucine leather bag, one of the most expensive items in the range at 8,800 euros, and a petite Alma canvas bag, each of them covered with colorful, but irregular dots.

Vuitton’s repetitive design, with the LV initials interspersed with stylized flowers, first debuted on trunks in 1896 and has become one of its most potent, and popular, brand signifiers.

Arnault explained that Vuitton’s teams were tasked with reproducing the dots Kusama once hand-painted on a trunk. After countless trials, they achieved the desired effect: The dots seem to float on the leather goods, glistening here and there as if Kusama had just lifted her brush from each circle, the paint still wet.

“Everything was done with extreme precision,” she stressed. “What’s amazing about working with artists is that they really push the boundaries… It makes us even better and pushes also our boundaries.”

She motioned toward a photo on the wall of a wonky, top-handle Vuitton handbag by architect Frank Gehry, one of six “iconoclasts” tapped for a 2014 collaboration.

“There’s not one straight line on that bag, so for the atelier, that was a super big challenge,” she recalled.

Arnault described a massive, companywide effort to realize the Kusama project, which involved every product department and the company’s supply-chain, industrial, design, marketing, retail, communications and visual merchandising teams. Kusama’s dots will even invade the brand’s dot-com business, with a temporary makeover slated for its online store.

Artistic collaborations stretch back more than a century at Vuitton, to the founder’s grandson Gaston-Louis Vuitton, who conscripted artists and designers such as Pierre-Emile Legrain and Camille Cless-Brothier for products and windows in the ’20s and ’30s.

The pace picked up considerably during the Marc Jacobs era from 1997 to 2013, when he invited Stephen Sprouse, Takashi Murakami, Richard Prince — and Kusama — to collaborate on capsule collections. In 2013, the blockbuster Murakami collaboration — which featured colorful versions of the monogram, some interspersed with eyeballs — was said to generate one-tenth of the brand’s revenues that year.

When Kusama first met Jacobs, receiving him at her Tokyo studio in 2006, she presented the designer with a Vuitton Ellipse bag, whose monogram canvas she had painted over with dots. He invited her to collaborate on a line of clothes and accessories in 2012, some decorated with her tentacle-like “nerves” motif.

In recent years Vuitton has also collaborated with Sol LeWitt and Jeff Koons, also inviting hosts of emerging and established contemporary artists to take part every year in its Artycapucines project.

More recently, Vuitton figured as the only luxury brand to mount a booth at the inaugural edition of the Paris+ by Art Basel fair to highlight its long-standing relationships with artists.

“I think that Vuitton really has legitimacy in doing collaborations with artists, and it’s the brand most linked to culture,” Arnault asserted, characterizing them as a win-win.

While declining to discuss numbers, Arnault said its collections done with artists are “extremely successful” commercially. On the flip side, artists “want to do it because it gives them access to another public.”

“This collaboration is going to be in all our windows, it’s going to be in our advertising so it exposes their art to people who would not necessarily have been to a museum,” she explained.

Arnault noted that all of Vuitton’s artistic collaborations end up becoming highly collectible, often accruing greater value on the resale market. They attract art collectors and clients who might not be familiar with the artists, but become intrigued to learn more, she added.

For serious art aficionados, or partiers, 40 hard-sided Champagne trunks customized by Kusama’s studios are up for grabs at 400,000 euros each.

The print campaign, with its cast of models from various generations, is meant to reflect that Kusama’s art appeals to everyone. Its tagline, “Creating Infinity,” nods to a key subject in Kusama’s work, and to Vuitton’s travel roots, dreamy storytelling and seemingly endless growth trajectory.