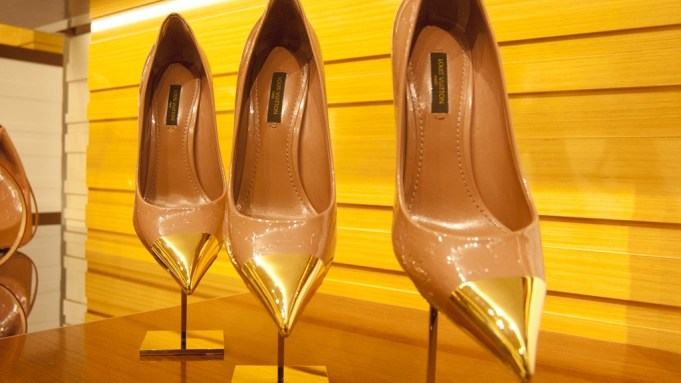 Similar in size to the brand’s Manhattan location on 57th Street, the fourth U.S. maison, which opened at Aventura Mall earlier this month, represents an ambitious expansion from the intimate boutique that operated for decades at Bal Harbour Shops, as well as a recently added temporary space in the Miami Design District.

In the spirit of competition, the latest maison gives the chance to one-up even itself. Men’s made-to-order shoes launched exclusively within North America at Aventura, which also features the continent’s first facade of 1,350 individually casted and hand-set floral medallions that adorn an exterior entrance (each level also has mall access).

Due to the region’s explosion in traffic of international consumers with a ravenous appetite for luxury goods, the company needed more space for bespoke services and categories previously absent in the market, such as fine jewelry and watches, according to Valerie Chapoulaud-Floquet, president and chief executive officer of Louis Vuitton North America.

“Along with New York and Los Angeles, Miami is part of America’s luxury triangle with a sophisticated clientele that not only includes tourists beyond Latin Americans but locals who travel extensively,” she said. “The city was missing the level of service and products that suit its demographic.”

Top clients privy to a preview immediately took to studying swaths of leather and watch mechanisms in big-ticket sections new to Miami. In the men’s made-to-order shoe annex, modeled after Louis Vuitton’s shoe atelier in the Veneto region’s Fiesso d’Artico, they peered into tiny boxes holding sizes and soles. Only six stores have the program since its introduction in 2011. It adjoins one of the most comprehensive men’s shoe departments Stateside, where the city business Derby style with ombré toe caps and suede tuxedo loafers with Damier satin bows sit among well-stocked shelves and sporty props like logo bicycles and surfboards that aren’t for sale.

In the upstairs VIP lounge that also houses the third haute maroquinerie for custom handbags in North America, sliding panels, lit cubbyholes and narrow trunk compartments reveal materials for 40,000 variations. Styles range from icons such as the circa-1932 Noé that Gaston-Louis Vuitton designed to cart Champagne to the contemporary Milaris. More than two dozen colors offer traditional neutrals, plus fashion-driven kiwi and mandarin.

“There are so many options that the bag is truly yours,” said Chapoulaud-Floquet.

The spacious salon opens onto an enclosed tropical terrace furnished like many of the city’s chic boutique hotels and high-rises. Store designer Peter Marino also went for a residential feel and planters for the courtyard entrance that borrow from the region’s well-documented midcentury modern architecture, especially its floral shade screen. Mannequins atop a sand-filled pedestal at the door lead the way to an onyx and amber runway embedded in the floor of the women’s department on the second level.

“We brought in a lot of spring-summer items early for the opening to give our best clients the most interesting choice,” said Chapoulaud-Floquet, though no exclusives were developed for the occasion. “Instead we’re giving luxury by emphasizing bags in exotic leathers and limited-edition watches.”

Fine jewelry and watches also highlight trendy materials such as rose gold and new collections, like Lockit, inspired by the brand’s travel DNA and lovers’ fad of securing padlocks to bridges and tossing the keys. The Idylle collection’s dainty flower logo designs are displayed with more serious pieces, including a L’Ame du Voyage bracelet and cocktail ring of white gold and diamonds, and a Tambour Tourbillon men’s watch of which only 23 were produced and engraved numerically. Golden gates guard a cozy, private viewing area.

Linked by a curved, stately staircase of stainless steel and glass with a handrail enveloped in signature nomad leather, both levels carry handbags at every twist and turn. Coral quilted love seats and multicolored cylindrical stools furnish the ample bag bar with brilliantly lit cases and cascading shelves. Downstairs has monogram styles in high-end and mixed leathers, along with a wall of Sofia Coppola’s single collaboration. The classic Alma shape in all its variations occupies the rotating bag gallery upstairs.

Dedicated art spaces set maisons apart from regular stores, and Aventura claims its share. Brooklyn-based Janaina Tschäpe’s panels of paper swirls in Miami hues and a soothing video titled “The Ocean Within,” which also fits the beachy context, inaugurate a vestibule for rotating exhibits. Jorge Pardo, a Cuban artist whose massive lamp installation already hangs in the mall’s extensive art collection, created a pastel sculpture that winds with the store’s staircase, while Dan Colen’s floral painting is tucked far back among the textured white walls of women’s ready-to-wear.

“All these elements are quite rare, so there’s really no equivalent to this store, just as every maison is its own destination,” said Chapoulaud-Floquet.

Chapoulaud-Floquet said Aventura’s proximity to Bal Harbour and the Miami Design District provided the right geographic formula for a maison, and store size is determined by client expectations rather than a global strategy for bigger stores.

“We have doors that are 1,500 to 2,000 square feet, so it’s really on a case-by-case basis for every city. If anywhere, Los Angeles would be our next maison, but we have no plans for the moment,” she said.