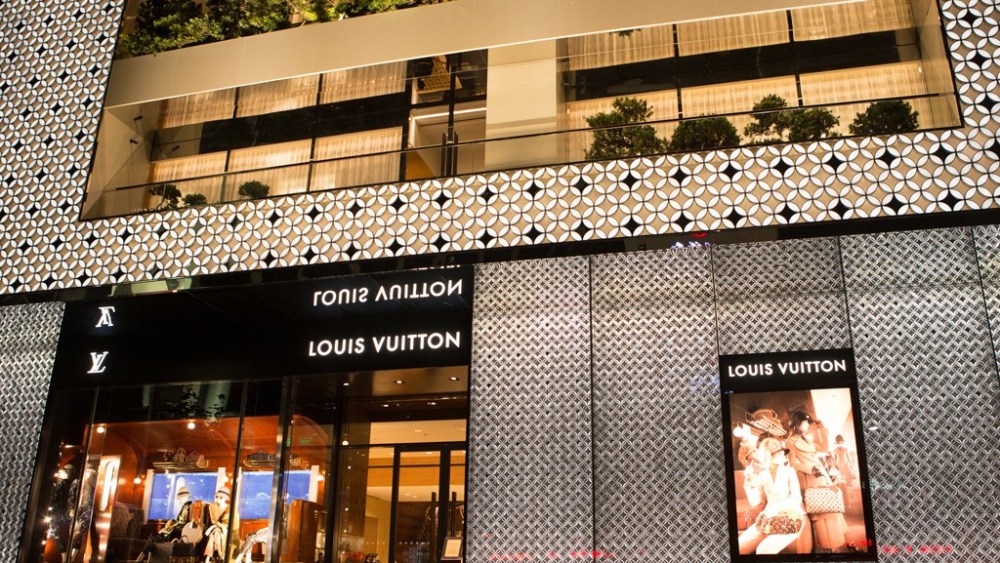 SHANGHAI — Louis Vuitton brought a major dose of Belle Epoque glamour to this city Thursday night, reprising its extravagant fall train-themed show from Paris down to the last detail.

True to the invitation’s indication of a 9 p.m. sharp start time, the same vintage locomotive that awed the industry audience in Paris pulled into a massive set erected on the waterfront of the historic Bund. Postshow, attendees clamored to have their pictures taken in front of the vehicle. They also raced to capture snaps of celebrities such as Laetitia Casta, Fan Bingbing, Alexa Chung and Gong Li, who climbed aboard the train and waved to their enthusiastic fans.

Lana Del Rey performed, decked out in a white party dress and heels. She took to the stage and crooned numbers including “Video Games” and “Blue Jeans” to the crowd, assembled in a part of the venue resembling a giant train car overlooking a futuristic cityscape of neon lights and the city’s emblematic Pearl Tower.

The show, undoubtedly one of the most theatrical fashion events ever here, capped off a two-day publicity extravaganza. On Wednesday, Louis Vuitton celebrated the reopening of its enlarged and refurbished flagship in the Plaza 66 mall with a cocktail and gala dinner that featured a performance of two Chopin nocturnes by classical pianist Li Yundi. At one point, a cat briefly interrupted proceedings by scampering across the room before making a swift exit.

Before Wednesday’s dinner, VIP guests assembled on the terrace where nonlocals nursed their jet lag and chatted about their impressions — however brief — of the city. “It’s great so far. I’ve only seen cars and my hotel room, but the cars are nice and the hotel is even better,” said Chung. Clémence Poésy said she was gearing up for an “architecture tour” the following day, while Casta said she hoped to take her five-year-old son to the aquarium or a museum.

Although executives would not confirm square footage, the Plaza 66 store, which opens to the public on Saturday, is considered one of Vuitton’s biggest, on par with the Champs-Elysées flagship. The Peter Marino-engineered overhaul, which upgrades the store to “Maison” status, took nearly two years to complete. The facade features an interlocking mesh of white metal over mirrored glass, echoing the brand’s monogram. Interior elements include Italian marble floors, a striking circular staircase, a private fourth-floor receiving area for VIP guests and a series of outdoor terraces planted with fern pine trees. True to Maison form, the store features a selection of artwork, including a hanging installation of pyrite by Teresita Fernández above the jewelry area and a trio of abstract steel sculptures by Chinese artist Qiu Zhijie. At the opening cocktail Wednesday night, LVMH chairman and chief executive officer Bernard Arnault said he considers the store “one of the most beautiful we ever did with Peter [Marino].”

There are four levels, with an emphasis on some of the house’s most exclusive products such as crocodile handbags, customizable leather goods, fine jewelry and made-to-order, hand-stitched men’s shoes. While the brand’s famed, logoed canvas items are clearly present, they appear to have taken on a supporting role in the mix.

Yves Carcelle, who will conclude his tenure as Vuitton’s chief executive officer at the end of this year, said the revamped store represents a subtle, sophisticated approach to consumers in a fast-growing market. While careful not to downgrade the perception of the revered canvas, Carcelle acknowledged that the Chinese consumer is evolving fast and is eager for original, luxurious products. “This trend to sophistication exists everywhere in the world,” he said during an interview on Tuesday. “The thing that happens in China is that everything grows faster, much faster. So what takes 20 years in another country can take five years here, including the personal journey…the world has a tendency to become richer and people who have experienced luxury for some time, well, want to sophisticate their experience.”

Carcelle declined to discuss Vuitton’s business outlook for China ahead of LVMH’s release of first-half figures next week, but he downplayed any evidence of a slowdown. “No country can survive at 10 to 15 percent [sales growth] every year but still, at a rate of 7.6 [percent], even if it’s a slowdown, it’s still something that we would love to have in France,” he said. At a press conference the next day, Christopher Zanardi-Landi, executive vice president of Louis Vuitton, said the house is “still seeing very, very strong double-digit growth with the Chinese.”

LVMH’s most recent figures indicate that its first-quarter revenue in Asia grew 17 percent, compared with growth of 27 percent for all of 2011, reflecting in part the macroeconomic situation that has seen the Chinese economy cool in recent months. LVMH does not break out sales for Vuitton, which opened its first store in Beijing in 1992 and has about 40 stores in the country.

Carcelle seemed unfazed by a recent development in the country that some observers claim could dent luxury sales. Last week, the Chinese government unveiled new rules barring government agencies from purchasing luxury items, goods or commodities “above certain standards,” a move that could put a damper on China’s ingrained practice of gift-giving and exchanging in business and government circles. Carcelle said a period of uncertainty is to be expected as China heads toward a leadership change later this year.

“In every country, when you have a change of government, you have a little bit of a period of uncertainty before,” he said. “I am quite convinced after [the leadership change] things will become more normal.

“This is a very specific period and I would not jump into drawing conclusions too quickly.”

To coincide with the reopening of the store, Vuitton has staged an exhibition in the atrium of the Plaza 66 mall showcasing the brand’s history and long-standing connection with the world of travel. The exhibit, which runs through Aug. 12, features a collection of archive items, from a 1930 logoed desk trunk to the nurse outfits that were part of Jacobs’ collaboration with Richard Prince. There are also plenty of high-tech touches, like an iPad preview of an upcoming book of Gaston-Louis Vuitton’s vintage hotel labels.

Carcelle said the brand plans to open a few more stores in the near future, including a Maison in Beijing’s China World mall next year, but its primary focus is on expanding and renovating its current network. “Some of our colleagues have decided to go much more deeply into the Chinese landscape. Basically, we are staying in provincial capitals. We don’t plan to go further,” he said. “We are not available everywhere in China.”