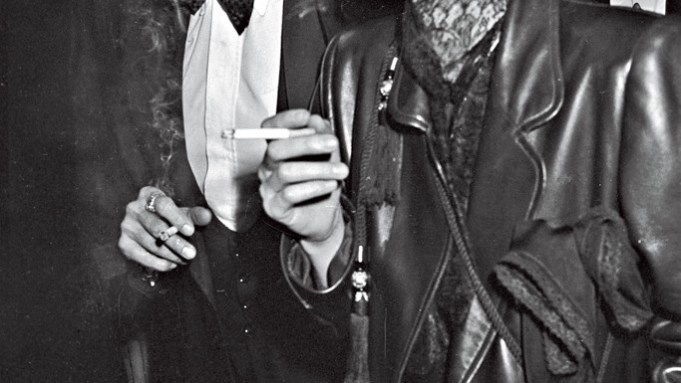 PARIS — Loulou de la Falaise — a close collaborator of the late couturier Yves Saint Laurent for three decades and a fashion figure prized for her inimitable offhand chic — died Saturday at her country house in Boury-en-Vexin northwest of Paris. She was 63.

The Pierre Bergé-Yves Saint Laurent Foundation announced her passing “with immense sadness,” citing an unspecified “long illness” as the cause of death. Bergé declined further comment.

According to sources, de la Falaise was diagnosed with cancer last June, but implored intimates to keep her health a private matter.

While best known for sophisticated costume jewelry that mixed semiprecious stones and other eclectic materials, de la Falaise was behind a range of products at YSL, from couture hats to the Variations second line.

The English-born designer, who brought a gust of insouciance, humor and heart to the stuffy world of high fashion, launched a namesake collection of fashion and accessories in 2003 following the retirement of Saint Laurent.

“If you’ve worked for Yves Saint Laurent, it’s very difficult to work for another house,” she told WWD at the time. “Plus I don’t think anybody would have wanted me. It would be practically like hiring him: The eye one’s got; the way we look at things.”

At its peak, her signature business comprised two freestanding boutiques in Paris, and wholesale clients including Bergdorf Goodman and Saks Fifth Avenue. She closed her Rue de Bourgogne flagship in 2007, blaming a lack of traffic, and quietly wound down most of her operations as the global financial crisis sapped demand and put pressure on small fashion businesses.

Yet she kept up her profile in the industry, selling her baubles to a handful of local accounts, collaborating with Oscar de la Renta on his jewelry collections in New York and hawking affordable accessories and clothes on home-shopping giant HSN.

Her final designs, a line of costume jewelry she did over the summer, are slated to go on sale next month in the shop at the Majorelle Garden in Marrakech, where Saint Laurent’s ashes were scattered after his death in 2008.

A fun-loving sort, de la Falaise was also a popular personality on the Paris social scene and one of the most glamorous figures in Saint Laurent’s circle with her petite proportions, intoxicating voice and bohemian flare.

Over the weekend, designers, friends and associates paid tribute to her sparkling personality, down-to-earth nature and an unequaled color sense.

“Loulou was poetry,” said Betty Catroux, another key woman in Saint Laurent’s circle, known for her poker-straight hair, tuxedo dressing and androgynous allure. “We were the opposite. She saw everything in pink and I saw everything in black. We shared a life together with such complicity. If I could choose a dream sister, it would be Loulou.”

“She was a cool woman,” said Lanvin’s Alber Elbaz, who designed YSL ready-to-wear for three seasons in the late Nineties. “She was the inspiration, yet she was the one who made it pragmatic because she wore the inspiration. She had great taste and a great eye.”

“I have know Loulou since we were 20. We had a lot of laughs together,” said Diane von Furstenberg. “She had an powerful spirit, an amazing chic and style. She could turn anything into something.

“I recall that she was staying in our house in Sardinia with Egon and I the summer Yves offered her to come and work for him,” von Furstenberg said. “I remember that all she had with her was a tiny cardboard suitcase with a few scarves…but she would transform these scarves into beach covers, dramatic evening outfits and glorious turbans. Loulou really had the touch.”

“She was just so unbelievably stylish. She had a way of putting together things — no matter which designer made them — that made them her own.”

Praising her “refined eye,” de la Renta said she was able to express extravagance without a whiff of vulgarity.

“She was like a fairy queen — queen of the night,” said Christophe Girard, who worked at YSL from 1977 to 1998, most recently as deputy managing director, recalling a spectacular entrance she once made at Paris nightclub La Palace with stars in her hair, and another in a fur hat and Cossack clothes at the Russian Tearoom in New York. “She was very chic — she had nothing of the bourgeois, never, never.”

Girard lauded her spontaneity, caring nature and cultural intelligence. “She read a lot. I remember a long conversation we had about Bruce Chatwin,” he said.

Inès de la Fressange, no slouch in the je-ne-sais-quoi department, marveled how de la Falaise could assemble disparate and even humble items — ethnic jewelry or thrift-shop finds — and elevate them to the height of elegance and sophistication.

“It was not a question of looking wealthy, but just looking chic,” she said. “She had it in her blood.”

Paris-based designer Andrew Gn recounted with exacting detail what de la Falaise wore when he, fresh out of Milan’s Domus Academy, first laid eyes on her: a skinny dark brown turtleneck tucked into gray flannel pajama pants, her waist encircled with a giant brown crocodile belt, her wrists jangling with bangles in wood and metal.

“She really exemplified what French chic is all about,” Gn said. “She brought a lot of style to Saint Laurent.”

In an interview in 2003, de la Falaise insisted her outfits were never studied.

“I never think ahead about what I’m going to wear,” she said at the time. “I get out of my bath and then I dress. Sometimes, it’s a new pair of shoes and I work around that. But sometimes it simply depends on what’s at the cleaners and what’s around.

“I never think in terms of what’s fashionable or not,” she continued. “It’s totally instinctive. I’m actually terrible about thinking ahead. When people say, ‘What are you going to wear?’ — that gets me very nervous. When I throw things together at the last minute, I’m happy.”

Echoing other observers, de la Fressange also lauded her friend’s irrepressible sense of humor and irony. “She saw the funny part of things all the time,” she said. “She loved to giggle.”

Semiprecious stones were among the designer’s favorite materials, de Ravenel said, though she also got excited about wood, crystal, Moroccan beads — you name it. While de la Falaise designed cuffs, earrings and rings, “you always picture Loulou in a necklace.”

Louise Vava Lucia Henriette de la Falaise was born in 1948 to an English mother and a French father, and first came to Saint Laurent’s attention during the Swinging Sixties.

Then an editor for Queen magazine in London, she was famous for her outrageous, extravagant style. When Saint Laurent hired her in 1972, her role was not clearly defined. Certainly one of the glitziest members of his entourage, she was an ambassador, friend, confidante, party pal and a glamorous mascot for the house.

Her design responsibilities became formidable, however. She was involved in ready-to-wear and couture as well as directing accessories and jewelry. For the last 10 years of the couture house, she designed the couture jewelry collection. Counting the house’s various in-house lines and licensed collections, de la Falaise designed more than 1,000 pieces of jewelry a year.

De la Falaise had a broad fashion appetite and wore brands including Louis Vuitton, Prada, Jil Sander, Martin Margiela and Yohji Yamamoto, in addition to YSL, though she never resembled a billboard for anyone’s style.

“I’m not a very strict person. I’m more of an extravagant type of person,” she once said. “I’ll keep on mixing because it’s more inspiring.…I think fashion goes through phases. I just wait for them to be over.”

De la Falaise is survived by her husband, Thadée Klossowski, a son of the artist Balthus, and their daughter, Anna, an art historian specializing in contemporary art.

She is predeceased by her brother, Alexis, a furniture designer who had decorated her Rue de Bourgogne shop, and her mother, Maxime, a celebrated model, food writer and social maverick.