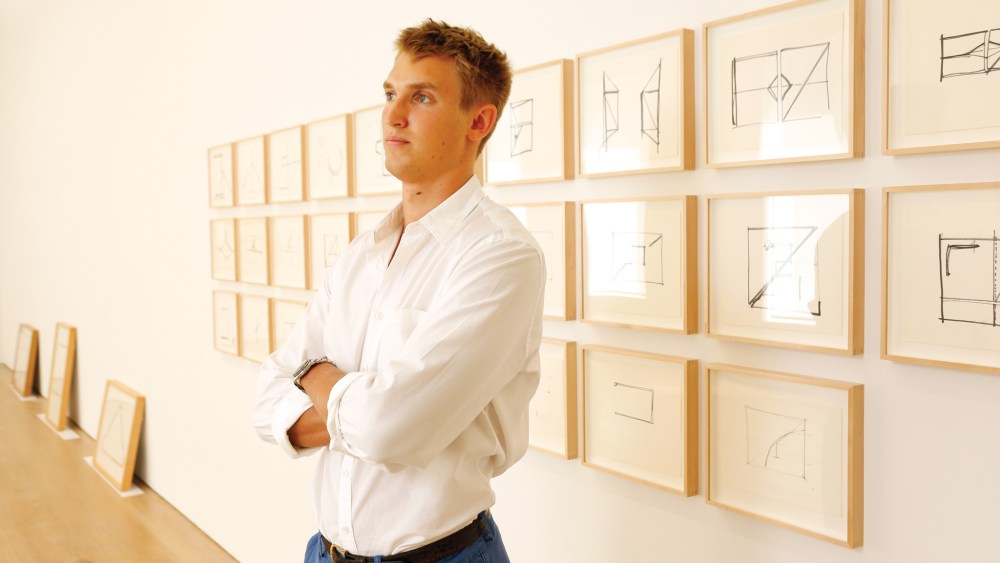 On a recent afternoon, a strapping young blond moves through a gallery in Manhattan with the swagger of a big man on campus.

As staffers install the new Gordon Matta-Clark exhibit, he smiles and waves, doles out “How are yous” and strolls the grounds, practically with a pep in his step. And why not? He is Lucas Zwirner — son of David, art world titan — and this is his playground, the family’s five-story flagship in Manhattan’s Chelsea.

The younger Zwirner was born into art world royalty and reared among some of his father’s famous artists — his earliest childhood memory involves Jason Rhoades and a BB gun — and now, at 24, he’s striving to make his own mark. Last month, he joined the family business as editor of the gallery’s year-old publishing imprint, David Zwirner Books.

At 6’5”, with blue eyes and a strong profile, he seems more brooding jock than bookworm. But that all changes as he offers running commentary of the Matta-Clark exhibit as if he were a museum docent.

“What’s really exciting about the show is that Gordon Matta-Clark’s works on paper have really not been shown in this form ever,” he says, referring to the artist’s “cut drawings,” where he sliced through several layers of paper to create sculptural objects. “He’s most famous for these architectural inventions, where he cuts a building in half. This stuff, you can begin to see even in these flatworks, how he’s dealing with cutting, especially sculptural cutting…you’re already beginning to see the way he’s dealing with a building is like a medium.”

Though the way he speaks about it might suggest otherwise, Zwirner didn’t always want to be in the arts. At Yale, searching for a break from the family trade, he was a philosophy and comparative literature major who spent most of his time at the library.
“I remember reading Wallace Stevens poems and feeling like I could not be doing anything more important,” he says. “At least for the first two or three years, I wanted nothing to do with the sphere of influence that generates from here.”

The summer after his freshman year, he translated a children’s book called “Momo,” one of the lesser-known books by the author of “The Neverending Story,” Michael Ende. It was only after plenty of unsuccessful shopping around that McSweeney’s McMullens decided to publish it. (He’s translated a second Ende book since.)

“I pursued things independently,” he says. “So developing these skills — writing, different languages, reading complicated texts — it sounds silly to say that was a rebellion, but it was something like taking ownership over something for myself.”

After college, he taught middle school English at the Success Academy charter school in Harlem. “It’s a bit of a cliché, but I felt it was time to do something for other people,” he says, though after a year of “extremely taxing” 14-hour days, that desire waned. “The whole thing just felt like chaos constantly. And there’s something stimulating about that; it definitely takes you out of your head.”

It was Rhoades who brought Zwirner back into the gallery’s embrace. He embarked on an oral history of the artist, who died in 2006 at age 41, and for a year traveled as far as Europe and California interviewing curators and artists, at one point even meeting with the artist’s high school art teacher, who still had his pupil’s drawings. “It was the prospect of being able to work the archival material I had collected into a much more robust catalogue on Rhoades — one that went far beyond the exhibit — that made me most excited about future directions for Zwirner Books. That rich archival approach is becoming a staple of many of the books we are planning and making,” he says.

Overseeing the creation of catalogues, monographs and artist books for his father’s gallery, Zwirner is riding a trend in the art world as more blue-chip establishments — Gagosian, Pace Gallery and Hauser & Wirth — pour resources into their own publishing arms rather than outsourcing to commercial publishers with dwindling budgets. He’s also brought a touch of Millennial savvy to the old trade — for instance, he’s working on a book about New York artist Raymond Pettibon’s Twitter account and he’s encouraged the return of ’zines, periodically giving artists like Marcel Dzama free reign over a small paperback.

“I think the projects that are really exciting for the publishing house are the ones where we’re trying to break new ground, projects that go beyond the immediate scope of the gallery program,” Zwirner says. “We’re interested in finding people who maybe have not traditionally written about art, but are very good at descriptive writing, and having them come write for us.”

For all his initial “rebellion,” he certainly seems to have come around to the gallery life — nepotism and all. “We’ve always been close as a family,” says Zwirner, who has an 18-year-old sister and a 22-year-old sister, neither of whom is involved in the business.

And while he knows his pedigree opened many doors for him (“These are people with whom I have relationships, obviously, so I’m not coming out of nowhere…”), he’s not without his own passion for the arts.

At the Matta-Clark exhibit, he seems almost in awe of his surroundings. “Architecture doesn’t need to just be something that you live in — it can be the thing that you cut and transform and transmogrify,” he says. A little heavy discourse before noon? Sure. But it’s a look Zwirner wears well.