Following six years at A|X Armani Exchange the designer is launching his own label for spring. 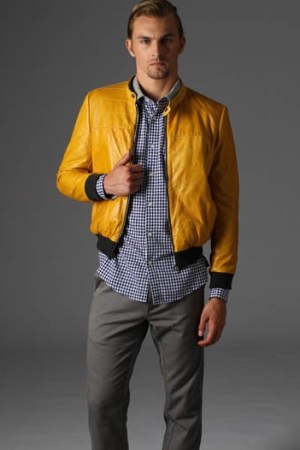 Following six years at A|X Armani Exchange as a men’s knit and sweater designer, Lucio Castro is launching his own label for spring. The line has been picked up by Opening Ceremony, and the influential retailer is also representing Castro in the company’s showroom, which wholesales independent designers.

The collection’s aesthetic is spare and sophisticated, with clean lines and minimal, subtle details. Fabrics are from Japan, and everything is made using eco-conscious materials and techniques in Sri Lanka. Buttons are made from coconut or tagua nut, with oxidized button shanks that give off the patina of age.

“I like to let the fabric speak for itself,” said Castro, adding that he is an adherent of Fernand Deligny’s ethos of “elevated simplicity.” Thus, a seemingly neutral charcoal fabric, for example, is actually speckled with neon flecks.

Castro originally studied medicine at the University of Buenos Aires and then switched gears to study film. In 1999, he moved to New York to attend the Parsons School of Design and earned a fashion design degree. He then interned at Marc Jacobs (along with designer Robert Geller), moving on to gigs at DKNY Jeans and then A|X Armani Exchange.

Highlights from the debut spring collection include a cardigan fashioned from woven shirt material and pants made from reversed gray denim, with the back of the fabric on the outside of the garment — which makes for an interesting effect when the hems are rolled up. A short, slim tuxedo jacket features denim lapels, while a mustard yellow leather jacket is lined in chambray.