Lutz & Patmos label will close at the end of this year. 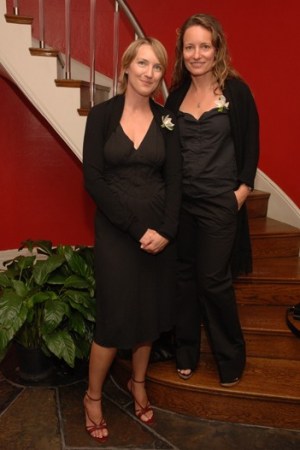 After a decade of designing together, Tina Lutz and Marcia Patmos are parting ways and will close their Lutz & Patmos company at the end of this year.

The duo ventured out on their own in 2000 after meeting at Barneys New York, where they designed its private label Basco sportswear. They developed versatile, timeless cashmere knitwear geared for design-minded, well-traveled working women much like themselves.

Before sitting down to design their first styles, they checked out 15 yarn mills, persuaded 200 people to complete questionnaires and scouted hundreds of stores in the U.S. and abroad. Inspired by such women as Jean Seberg and Charlotte Rampling, the designers used the research to create what they called “the movie,” a highly detailed composite of the customer base they envisioned. How else to determine the Lutz & Patmos customer unwinds reading The International Herald Tribune, The New Yorker or Smithsonian, and enjoys the occasional cigarette or doughnut?

They also collaborated with a number of notable guest designers including Carine Roitfeld, Jane Birkin, Fabien Baron, Archbishop Desmond Tutu, Christy Turlington and Natalia Vodianova. A percentage of sales from these one-offs were then donated to a charity earmarked by each VIP. In addition, Lutz & Patmos teamed up with big name brands like Coach, Volkswagen, West Elm and Uniqlo. These joint ventures drummed up publicity for a label that never advertised. Both Lutz and Patmos declined to comment Monday on the brand’s annual sales.

Their parting is said to be more personally motivated than financially, with each eager to pursue new opportunities. Patmos will unveil a designer label, M. Patmos, for pre-spring. She will also oversee the creative direction of Leroy & Perry, the contemporary sportswear collection she and Lutz introduced in 2008.

“There has been so much collaboration and innovation, not to mention that we have been fortunate enough to have weathered some extreme economic cycles. I am excited to build on the foundation of what I’ve learned as I move forward with my own label, and I wish Tina utmost happiness on her next path,” Patmos said.

Lutz, who previously worked in design at Issey Miyake, A.P.C. and Calvin Klein, will continue to work in design and brand consulting.

“It has been an extremely rewarding 10 years building the Lutz & Patmos brand. I am excited for myself and for Marcia that we each are getting to explore the next creative chapter in our lives and to build on all the positive experiences of the past decade,” Lutz said.

Known for their socially conscious and environmentally friendly approach to design, the duo’s creations have been featured in such museums as the Cooper-Hewitt National Design Museum, the San Francisco Museum of Modern Art and the Royal Museum of Scotland.