Luxury brands and other labels sold on eBay in the U.S. were dealt a major setback Monday in their battle with online counterfeiters. 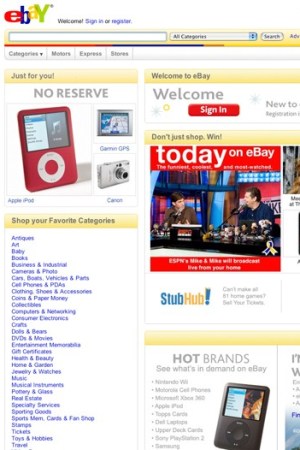 EBay’s business model has been validated — at least on one side of the Atlantic.

After a victory last month in France, luxury brands and other labels sold on eBay in the U.S. were dealt a major setback Monday in their battle with online counterfeiters. A federal judge in Manhattan, ruling in a trademark lawsuit filed four years ago by Tiffany & Co., said the giant online auction house does not have the legal responsibility to prevent the sale of counterfeit goods.

In what is believed to have been the first lawsuit of its kind in the U.S.,

Tiffany had sought to shift the responsibility for policing a trademark from brand owner to eBay. However, Judge Richard Sullivan ruled that it is the burden of Tiffany, not eBay, to maintain and enforce its mark. EBay fulfilled its legal obligations by taking adequate precautions to block the sale of fakes, Sullivan concluded.

Tiffany had sought to shift the responsibility for policing a trademark from brand owner to eBay. However, Judge Richard Sullivan ruled that it is the burden of Tiffany, not eBay, to maintain and enforce its mark. EBay fulfilled its legal obligations by taking adequate precautions to block the sale of fakes, Sullivan concluded.

“The rapid development of the Internet and Web sites like eBay have created new ways for sellers and buyers to connect and to expand their businesses beyond geographical limits,” Sullivan wrote in his 66-page decision. “These new markets have also, however, given counterfeiters new opportunities to expand their reach.

“The court is not unsympathetic to Tiffany and other rights owners who have invested enormous resources in developing their brands, only to see them illicitly and efficiently exploited by others on the Internet,” he continued. “Nevertheless, the law is clear: it is the trademark owner’s burden to police its mark and companies like eBay cannot be held liable for trademark infringement based solely on their general knowledge that trademark infringement might be occurring on their Web site.”

Tiffany indicated that it is likely to appeal.

“We are shocked and deeply disappointed in the district court’s erroneous reading of the law,” said Mark Aaron, vice president of investor relations at Tiffany.

The luxury jeweler still feels that eBay unfairly profits at its expense, as well as the public’s, and that the ruling allows the sellers of fraudulent goods to victimize consumers.

“We continue to believe that eBay is legally responsible for the trademark infringement of those selling counterfeit Tiffany jewelry and that eBay cannot avoid liability by placing the entire burden of enforcement on Tiffany and the other manufacturers of well-known brand name products,” Aaron said. “I’d be surprised if Tiffany did not appeal this decision,” he added.

EBay called the ruling “a victory for consumers.”

“The ruling confirms that eBay acted reasonably and has adequate procedures in place to effectively address counterfeiting,” the company said. “The ruling appropriately establishes that protecting brands and trademarks is the primary burden of rights owners. While today’s decision is a victory for consumer choice, it is a shame that so much effort has been wasted when Tiffany could have worked with eBay to more effectively fight counterfeits. EBay will continue to lead the industry with innovative solutions to stop the sale of counterfeits.”

Diane von Furstenberg, who has made the problem of counterfeits and the protection of original designs a key issue as president of the Council of Fashion Designers of America, said: “Fakes are damaging not only to brand owners but also to the consumers who unknowingly buy them. Stopping the sale of fakes online is a constant battle for sought-after brands. It’s unfortunate that the court did not go further in recognizing that online auction sites have an obligation to prevent the sale of fakes on their sites.”

The ruling is in direct opposition to one in France last month in which eBay was found liable for sales of counterfeit Louis Vuitton and Christian Dior goods and fined almost 39 million euros, or $61.9 million at current exchange rates. The auction site is appealing.

The Tiffany lawsuit was filed in June 2004. The luxury jeweler said eBay was liable for trademark infringement and dilution, false advertising and unfair competition in facilitating the sale of counterfeit Tiffany sterling goods on its Web site.

The suit alleged that 73 percent of 186 silver jewelry pieces bought by Tiffany employees through the San Jose, Calif.-based Web site were counterfeit. Tiffany charged eBay with direct and contributory trademark infringement among its other claims. The complaint sought the elimination of all counterfeit silver Tiffany merchandise on the Web site.

The ruling Monday came eight months after Sullivan presided at a weeklong trial.

Brand owners and others in the intellectual property community have been paying close attention to the case because it had the potential to cause havoc to eBay’s business model and open the popular Internet retailer to further litigation from other labels. According to a company report, eBay had 83.9 million active users and 647 million new listings around the world in the first quarter of 2008.

Lawyers for Tiffany said eBay had vicarious liability for any counterfeit merchandise. The tactic is typically used to prosecute landlords whose tenants manufacture or sell fake goods. Tiffany also argued that eBay bore responsibility in the sale of counterfeit goods by comparing it with a similar seller in the brick-and-mortar world: the owner of a flea market or swap meet.

“The distinguishing factor in those situations is that the owner of the swap meet or flea market had direct contact with the potential counterfeiters,” said Scott Christie, a partner at national law firm McCarter and English and a former federal prosecutor specializing in computer hacking and intellectual property. “Here the situation was more attenuated. EBay has hundreds of thousands of sellers who use screen names. The burden on the owner is commensurate with its link with the sellers.”

EBay maintained it is merely a service through which sellers operate and that because it never physically handles any of the goods for sale, the auction site cannot be charged with identifying counterfeits.

The company also argued that it has worked with brand owners through its Verified Rights Owner Program, which allows owners to report auctions selling fakes. According to the ruling, when eBay was warned of a listing that could possibly contain infringing merchandise, the company removed the listing, advised the sellers and bidders that it had been removed and why and refunded all associated fees. Sellers who broke a “three strikes” rule were banned from the site.

The court declined to rule on whether Tiffany might win if it were to sue individual sellers. However, Sullivan noted, “Given Tiffany’s choice to sue eBay, rather than individual sellers, and this court’s conclusion that eBay does not continue to supply its services to those whom it knows or has reason to know are infringing Tiffany’s trademarks, Tiffany’s claims against eBay must fail.”

J. Michael Huget, head of the Intellectual Property Group at Detroit-based law firm Butzel Long, said, “A significant part of this case was an evaluation of eBay’s existing measures for policing itself. The judge evaluated them and found them to be sufficient. If I’m an online retailer, I’m going to look at eBay’s policies very closely, follow them and use them as my defense: the eBay standard.”

Christie at McCarter and English said Sullivan’s ruling means that eBay is doing enough to police its Web site.

“It provides a pretty clear objective benchmark for what will pass muster for further online sales,” Christie said. “The online sales world is relatively new and there are not a lot of set rules or precedents to follow. This is one of those cases that will provide predictability as to what is and what is not acceptable conduct.”

The online retailer has not been as successful in denying its liability abroad. In a similar case last month, Paris’ Tribunal de Commerce found eBay guilty of gross misconduct for its failure to thwart the sale of fake Louis Vuitton and Christian Dior goods.

At the same time, the court awarded Parfums Christian Dior, Kenzo Parfums, Guerlain and Parfums Givenchy 3.2 million euros, or $5.1 million. LVMH argued that the fragrances could only be distributed through the retailers it had selected. The court ordered eBay to cease sales of all four brands immediately or be subject to fines of 50,000 euros or about $79,000 per day.

Paris’ Court of Appeal upheld the ruling Friday, confirming the injunction and fine and ordering eBay to pay an additional 10,000 euros, or $15,736, in legal costs. The auction house had requested the urgent hearing contesting the initial ruling. It has continued to allow for the sale of LVMH brands throughout the appeals process.

The U.S. district court decision gave eBay a needed precedent on its home shores. It highlights not only the difference between the French and U.S. trademark law, but also the uncharted territory in which the judges in each case walk.

“Here in the U.S. it’s going to be necessary for a mark holder to continue to police its brand,” said Stephen Kramarsky, partner at Dewey, Pegno and Kramarsky, who writes a column on technology and law for the New York Law Journal. Kramarsky said that eBay is fighting for its business model and noted the company’s position as a large part of the online economy.

“A lot of judges are aware that they are refining laws that have been in existence for hundreds of years and reconciling them with new technology,” he said.