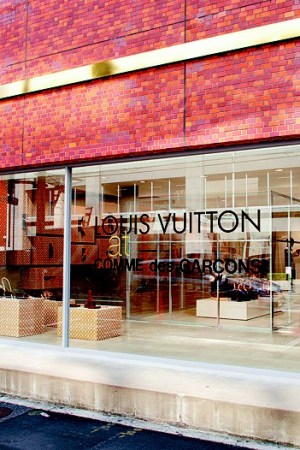 Hermès, Louis Vuitton and Chanel are among major brands plotting such retail ventures in the coming months, characterizing them as a way to tap into a new customer base, create excitement — and capture extra sales in a tough economy.

“Even if it has been done to address a problem, it can become an opportunity,” said Patrick Thomas, chief executive officer at Hermès International, which on Wednesday will open at 63 Main Street in East Hampton, N.Y., for a four-month stint. “It’s also a very interesting way to talk to new categories of customers.”

Thomas was mum on details, but Hermès is said to be mulling three or four such temporary locations this year, including in Europe. “If we open a temporary store, it’s a way to check: Do we have customers in that area or not?” he explained. “It’s a good way to put a toe in the market.”

“It’s a way for our brand to renew its vision, and to inspire the imaginations of a wider public,” said Bruno Pavlovsky, president of fashion at Chanel, which will christen a temporary store in Moscow later this month at Podium, a multibrand store. “The idea is to show only some items of our collection. The entire collection is available in the Chanel boutiques of that city.”

“This type of project is both a brand-building exercise and a commercial potential,” added Nathalie Franson, ceo at Azzaro, which operated a pop-up store on London’s Mount Street for four weeks last February and March — and is now plotting another for the south of France this summer. “It is a way of attaining new customers as well as reinforcing relationships with our current customers. It creates a direct link between the brand and its clientele.”

To wit: At the end of its four-week London stint, the specialty store Brown’s rang requesting to sell the few pieces remaining on the rails. Franson noted the temporary shop, which also launched an Azzaro capsule collection designed by Jemima Khan, was a “remarkable success on the press side.”

At present, Azzaro is only sold in the U.K. through wholesale channels “so opening a pop-up shop in a given market is the perfect way to reach out to our customers and invite them to discover the ‘world of’ Azzaro,” Franson said.

Vuitton, which opened a temporary store in Tokyo last winter to showcase a collaboration with Comme des Garçons and its iconoclastic designer Rei Kawakubo, will open another time-limited retail venture in the Japanese capital later this month while the French brand awaits a permanent location at the new Seibu Ikebukuro department store in 2010.

The temporary store will look the part: surrounded by scaffolding, wrapped in white mesh and with a raw interior with sections defined by stacked wooden crates (although the products themselves will sit on elegant, padded shelves).

Earlier this year, Yves Saint Laurent opened pop-up boutiques in New York and Hong Kong to showcase its Edition Unisex capsule collection. Valerie Hermann, the company’s ceo, described the shops as “a great success in terms of communicating the message of the collection” and for generating “important” sales. “As long as it is legitimately motivated, a temporary store is another source of exposure for a brand, another point-of-sale, another means to capture new clients. Especially in the current climate, this can be a beneficial thing,” she stressed.

Yet even for temporary stores, prime locations are key, according to Pavlovsky. “They must correspond to our values of luxury, creativity, services and modernity,” he said, lauding Podium as a “must-see” destination with its imposing architecture and minimalist interior. “The installation of a few Chanel pieces in these temporary stores certainly creates an exciting event,” he added.

Robert Burke, founder of New York-based consulting firm Robert Burke Associates, said opening a luxury megatower — commonplace during the recent luxury boom — would likely be frowned upon today. By contrast, a modest pop-up unit “feels right for the market now. It’s something slightly underground, and it’s not a huge effort for the brand,” he said. “It’s approached as a marketing venture in creating interest and buzz.”

While a diverse range of players has dabbled in temporary stores recently, from Target and Edun to beauty brand Roger & Gallet, Burke credited Comme des Garçons for being the pioneer.

In 2004, Kawakubo unveiled her first “guerrilla” store in a former bookstore in Berlin’s artsy and edgy Mitte district — her concept more akin to an artist’s squat than a luxury fashion temple. Rent had to be under $1,000 a month, and a maximum of $2,000 was spent on decor.

Adrian Joffe, ceo of Comme des Garçons International, said the firm has since opened and closed 31 such stores, with only the Glasgow one remaining. He noted some of the most successful guerrilla stores — in Athens, Los Angeles, Berlin and Warsaw — have transformed themselves into permanent stores. “We call them new generation stores, keeping the feeling of guerrilla with old stock mixed with new, and permanent lines plus other brands, too,” he noted.

Next up for Kawakubo is a temporary “guerrilla brand” called Black Comme des Garçons — born out of a desire to counter the feeling “of things being blocked or stopped because of the crisis,” Joffe said — that will last for about 18 months. As reported, 10 new points of sale (six in Japan and one each in New York, Paris, London and Hong Kong), are slated to open simultaneously in June stocking best-selling Comme styles in black only.

“Our guerrilla stores were about experimenting in new areas, new markets, getting new clients, collaborating with people outside of the fashion business and bringing fresh air into retail,” Joffe said. “Now everybody’s doing it so it’s time [for us] to stop.”