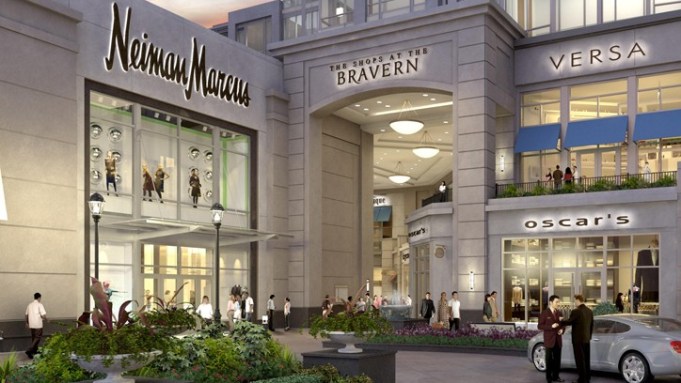 Construction of The Shops at The Bravern, a luxury center in Bellevue, Wash., set to open in September with the Pacific Northwest’s first Neiman Marcus store, began in 2006 when the Seattle suburb and high-tech hub’s economy was thriving.

The region hasn’t escaped the impact of the recession, but developers and retailers believe the nexus of technology companies in the area, including Microsoft Corp., provides positioning for success even as the luxury sector faces a worldwide decline because of diminished consumer spending.

Brands that include Louis Vuitton, Hermès, Jimmy Choo, Piazza Sempione, Tory Burch, Salvatore Ferragamo, LTJ Arthur, Wolford, Brooks Brothers Country Club and DNA 2050 have signed leases for The Shops. With the exception of Vuitton, all will be opening their first stores in the Pacific Northwest when the complex launches Sept. 12.

The 300,000-square-foot shopping center in downtown Bellevue, inspired by European villages, is part of a 1.6 million-square-foot, $500 million-plus office, condominium and retail development called The Bravern that covers five acres. The retail component is 82 percent leased.

“The [local] economy is very similar to what is going on most everywhere else in the nation,” said Seattle economist and forecaster Dick Conway, founder of Dick Conway & Associates, who predicted the unemployment rate in the Seattle-Bellevue-Tacoma metropolitan area of 3.2 million people would rise to a recession peak of 9.7 percent in the first quarter of 2010, compared with the latest rate of 7.9 percent.

However, when The Shops open Sept. 12, Conway said the Seattle-area economy may deal from relative strength given the area’s wealth, much of it concentrated in Bellevue and other neighboring municipalities in an area called the Eastside, a 15-minute drive from Seattle, across Lake Washington, with a combined population of 500,000. Seattle’s population is about 600,000.

“You still have a large fraction of the market doing reasonably well,” Conway said. “On the other hand, you will still see some cuts in discretionary spending.”

The 125,000-square-foot, three-floor Neiman Marcus store anchors The Shops, which devotes an additional 71,000 square feet to other luxury fashion retail. It also features restaurants, including an outpost of Terrance Brennan’s Artisanal in New York, a David Barton gym and a Red Door spa. An underground garage has spaces for 3,100 cars.

Aside from a few independent boutiques on a two-block stretch of Main Street, the closest retailing to The Shops is a 15-minute walk to Bellevue Square, a regional shopping mall with a contingent of high-end stores such as Burberry — its first Pacific Northwest unit — as well as Seattle-based Nordstrom. The other anchors are Macy’s and J.C. Penney.

Microsoft, based in neighboring Redmond, Wash., occupies The Bravern’s two office towers with 755,000 square feet of space and 2,300 employees. A pair of condominium towers is still under construction. The 455 luxury units range from $950,000 to $2 million for two-bedroom units, and three-bedroom penthouses for as much as $4 million. They are just 25 percent sold.

“We compared the results to other existing Neiman Marcus locations,” finding similarities, Katz said, dispelling a popular stereotype of Seattle-area residents as being more enthusiastic about hiking in nearby evergreen national parks like Mount Rainier than buying fashion.

As for opening a store in a weakened economy that has hit Neiman’s hard as sales have fallen along with consumer spending, Katz said, “From what we’re reading, the Seattle-Bellevue market is holding up better than some of the other markets where we have stores.”

Tom Woodworth, senior investment director of Schnitzer West LLC, the Seattle-based developer of The Bravern complex, said The Shops will help to fill a high-end fashion void, as well as create a dining destination.

“There is still very limited luxury fashion retail in this market and there is still a high concentration of wealth,” Woodworth said.

Last year, the average household income for the Eastside was $102,191, compared with $73,199 in Seattle and $67,918 nationwide, according to a survey by the market research company Claritas. Moreover, 22 percent of Eastside households reported disposable incomes of more than $100,000, compared with 11.8 percent in Seattle and 9.3 percent nationwide.

With 122,000 residents, much of the City of Bellevue consists of scenic, woodsy, suburban-style neighborhoods, as well as hilly, affluent enclaves overlooking Lake Washington. About 10,000 people live downtown in new apartments and condominiums, and Bellevue has the largest population in the Eastside area.

It is also a regional employment hub, and about 130,000 jobs are based in the city. In the last decade there has been an office-building boom that has transformed downtown, which now has 40,000 workers, with a heavy focus in software, e-commerce, bio-tech and engineering. T-Mobile, Expedia Inc., Coinstar Inc. and Drugstore.com are among companies based in the city. By 2020, an 18-mile light-rail is expected to link Seattle to Bellevue and the Microsoft headquarters in Redmond.

Likewise, space at Bellevue Square is tight, with a vacancy rate of 3 to 5 percent, according to management.

Bellevue Square, privately and locally owned by the Kemper Development Co., is the cornerstone of a larger mixed-use project of two hotels, office buildings and satellite malls covering several city blocks and connected by pedestrian sky bridges over downtown thoroughfares. The properties are collectively known as the Bellevue Collection.

Chief executive officer Kemper Freeman’s father started Bellevue Square in 1946. Once the economy rights itself, Freeman plans to expand the Bellevue Collection and develop an adjacent 1.4 million-square-foot mixed-used project, including 300,000 square feet of high-end fashion retail, which would directly compete with The Shops at The Bravern. The project is undergoing city review.

However, it might take two more years before the local economy starts revving up.

By 2012, job growth in the Seattle area should improve to pre-recession levels, economist Conway said, when the unemployment rate was 4 percent, and its diverse economy — with aviation, wood products, fish processing, e-commerce, financial services and international trade sectors in addition to technology — was growing 3 percent annually.