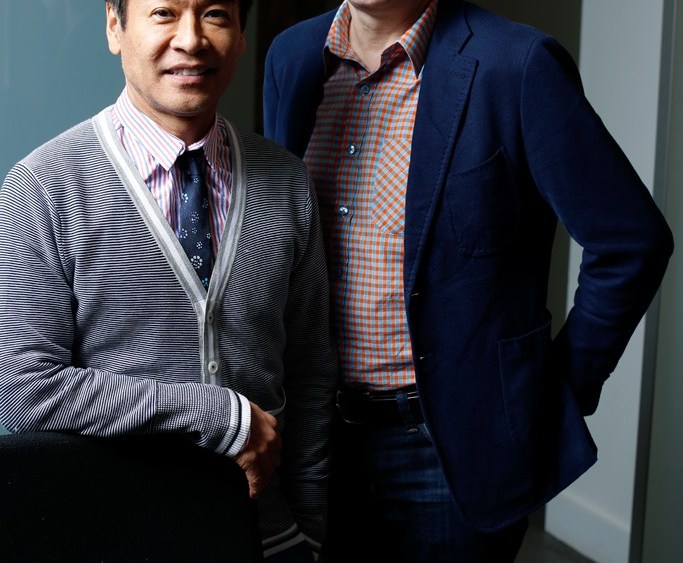 Like many of their counterparts in the fashion world, interior designers George Yabu and Glenn Pushelberg have a specific woman in mind when conceiving a new project — although the imagined muse changes from client to client.

“We created a whole story line about this girl named Chloë. She’s from the Upper East Side and then went to NYU. She got married and went back uptown, but she still has this downtown attitude,” explains Pushelberg of the inspiration for their new restaurant in Manhattan’s Peninsula hotel, which is set to open in September. “We always come up with a script for clarity — both for ourselves and to keep clients on track.”

That all-encompassing lifestyle approach has translated to the duo’s extracurricular work for their growing design firm, Yabu Pushelberg. Apart from designing luxury interiors for retailers, hotels, restaurants and even a private Airbus jet, the firm has translated its sleekly elegant aesthetic into furniture and home decor.

Retail has served as a cornerstone for Yabu Pushelberg’s growth over the years. Founded in Toronto in 1980 by the two partners, who met as students at Canada’s Ryerson University, one of the firm’s first big projects was designing Club Monaco stores during that chain’s first years. The duo also struck up a romance at that time and remain life partners.

Today their firm employs 72 people in Toronto and 36 in New York, with Yabu and Pushelberg splitting their time between the two cities.

The segue into a home line came naturally, as the designers often create custom furniture, fixtures, lighting and even carpets for their jobs. This holiday, Yabu Pushelberg will launch its first tabletop collection in partnership with Florence-based Pampaloni.

The creations, done in silver, are in two distinct configurations. The first group is based on sea creatures, as in a starfish candle stand, crab ashtray and jellyfish salt-and-pepper shakers in fluid, undulating silhouettes. The second group strikes a graceful aesthetic counterpoint and is based on man-made nautical objects, such as candlestick holders in the form of anchors and decanters with silver stops resembling buoys.

“There’s a duality to it, as in much of our work, with the organic, liquid shapes contrasting with the more rational and formal ideas,” points out Yabu.

The tabletop offerings add a new dimension to the furniture line Yabu Pushelberg deals out of its Avenue Road showrooms in New York and Toronto. The firm introduced seven new designs in May at the International Contemporary Furniture Fair in New York. Among them was the Rua Ipanema lounge chair, inspired by Brazil, with inviting rounded edges on a swiveling base of walnut wood. The Berkeley Square chair is more angular, with a flat bar base in polished nickel and a taut leather seat. All of the home pieces mirror Yabu Pushelberg’s sophisticated interior design work that is exactingly modern and more than a bit glamorous — but also inviting and familiar.

“I like to think our work is very livable. You can keep coming back, and you’re not irritated,” says Yabu.

It’s an ethos the firm has distilled in its recent work reimagining several floors of the Barneys flagship in New York, particularly the vast, luminous unisex shoe floor. Mark Lee, chief executive officer of Barneys New York, called Yabu Pushelberg’s involvement with the ambitious renovations “essential to bringing our vision to life,” noting, “our goal was to create an open, modern envelope for our mix of the strongest product in the world from great brands and designers — I am confident we achieved this.”

Across the Atlantic, Yabu Pushelberg is immersed in the rejuvenation of another storied retailer, the department store Printemps, on the recommendation of former Louis Vuitton chairman and ceo Yves Carcelle. Last year, the firm helped complete a revamp of three floors of the main Printemps building on Boulevard Haussmann, which housed the women’s handbags, accessories, watches and jewelry categories. This fall, they’ll begin renovations on an adjacent building, including the ground and lower levels that currently house cosmetics, fragrances and lingerie.

In China, the firm has a long relationship with Lane Crawford and last fall designed a new unit in the Yintai Centre in Beijing — largely at the behest of a single cosseted customer, according to Pushelberg. “There’s a woman named Tiffany Chen, who is the second-highest-spending shopper at Lane Crawford, and she wanted a store in that location,” he says. Yabu Pushelberg was happy to oblige.