With at least 20 percent less inventory on hand, luxury retailers say they’re back to a “normal” markdown cadence.

By David Moin and Sharon Edelson on December 1, 2009
View Slideshow 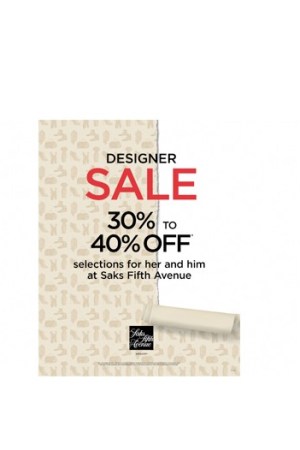 With at least 20 percent less inventory on hand, luxury retailers say they’re back to a “normal” markdown cadence and will break prices on major designer collections this week, generally at up to 40 percent off. These are permanent markdowns on major designer labels like Prada, Lanvin and Gucci, as opposed to the temporary “friends and family” or one-day-only markdowns seen on a range of labels through the season.

Last year, after the collapse of Lehman Bros., the AIG crisis and turmoil in the credit markets, luxury retailers found themselves stuck with bloated inventories and few customers, and desperately broke price a week or so before Thanksgiving. Neiman Marcus was among the first, but Saks Fifth Avenue responded with steeper markdowns. Last Christmas, eye-popping discounts of 75 percent and more for designer merchandise were not uncommon, but this year, inventories in many cases are 20 percent leaner.

The second and fourth quarters of the year typically entail clearance events and permanent markdowns. The first and third quarters are characterized by friends-and-family events, temporary markdowns, opportunities to earn points and electronic gift card offerings.

On Thursday, Saks will offer up to 40 percent off on designer goods, and will take deeper markdowns sometime after Christmas. But Net-a-Porter.com, the online retailer, broke price Monday with certain designers, with markdowns at 30 to 50 percent off. Additional designers will be marked down later in the week.

“This is the week that all the designer merchandise breaks,” said Jim Gold, president and chief executive officer of Bergdorf Goodman, noting the retailer’s sale on fall designer apparel begins Thursday with savings of 30 to 40 percent. “This has been the week that all the designers suggest as a break date. It’s quite a bit later than last year, but that was an aberration.”

Gold said Bergdorf’s has returned “to a normal [markdown] cadence. This is merchandise we started receiving in May.” Resort, which is just arriving at the store, will not be part of the sale.

“Our inventory is very light,” Gold said. “We have so much less markdown inventory than we’ve had. Fall is slim pickings and the assortments are very broken. We need to do this to make room for new receipts. We’ve had great regular price sell-throughs. We’re extremely pleased with our normal price selling.”

Executives at Saks also said the store has returned to a normal markdown cadence and that there is much less inventory on hand.

“By this time last year, some stores already had second markdowns,” said one retail source.

Neiman’s fall sale begins Wednesday, a spokeswoman said, adding “the direct mail card [advertising the sale] has already been sent to homes.” Neiman’s has been somewhat promotional, offering $50 gift cards on Black Friday that can be used toward purchases through Sunday. Neiman’s Web site advertised a women’s better apparel sale. Wednesday’s designer sale will feature brands such as Gucci, Giorgio Armani and Prada.

Also on Thursday, Barneys New York will reduce prices on all major designer fall collections sold in the store, including Balenciaga, Dolce & Gabbana, Lanvin and Prada, at up to 40 percent off, the first markdown. Some private label and smaller designers have already been marked down.

After Christmas at Barneys, discounts climb to 60 percent off, and deeper discounts of around 75 percent typically occur around New Year’s. In February, Barneys’ famous warehouse sales will be staged in New York and Los Angeles.

Scoop NYC is planning to go on sale Thursday with discounts of 30 to 40 percent. “We’re following the designer break schedule and following the cadence,” said Susan Davidson, president and ceo. “Every vendor has a different date. The majority of designer breaks are this week. Forty percent off is pretty much consistent.”

However, Davidson added, “We don’t think we need to go that deep. Stuff is selling really well.”

Davidson said Alice & Olivia, Rag & Bone and Scoop private label fur vests in fox, coyote and beaver, priced at $850, were top sellers over the Black Friday weekend. Scoop converted one of its stores to a party shop with cocktail dresses, which Davidson said has been successful. “We’re very pleased with the business this past weekend,” she said. “Tom Binns’ high-end jewelry sold very well. We’re very pleased with our November business.”

Diane Levbarg, executive vice president of Missoni USA, said customers visiting Missoni’s Madison Avenue flagship on Black Friday were looking for opening price points or giveaways. “I had a very bad Black Friday,” she said. The shopper who came out over the weekend, however, seemed to be more familiar with the collection. “I had a very good Saturday and I’m having a very good Monday,” Levbarg said, sounding relieved. Missoni went on sale last week at 40 percent off.

“I’m on sale based on the schedule of two years ago,” she said. “Last year was the year I had to meet what everybody else was doing. I always went on sale for Thanksgiving weekend.” Missoni has been selling full-priced resort and sale merchandise. “We’re not on sale as early or as deep as we were last year,” Levbarg said. “Now we’re at 40 percent off. Last year, we started at 50 percent off because Saks started at 50 percent off. Also, we have no accessories on sale.”

Giorgio Armani advertised a sale at its stores around the country beginning Thursday; Emporio Armani is on sale at 40 percent off. Gucci’s fall sale begins today.