The Chicago-based business will open a permanent West Hollywood showroom in September on the heels of a successful pop-up testing into the L.A. market.

LOS ANGELES — The luxury rental business has another contender looking for its share of the marketplace in Janet Mandell’s By:Fashionaholic.

The showroom in West Hollywood’s Crescent Heights neighborhood is in a private resident totaling 1,500 square feet and comes on the heels of the company’s pop-up earlier this summer. Some 500 to 800 vintage and runway pieces will be stored throughout the space. It’s the company’s first since opening its flagship 3,400-square-foot showroom in Chicago’s River North neighborhood a little over a year ago.

By:Fashionaholic’s more recent roster of clients includes Gigi Hadid, who rented a Chanel suit for Karl Lagerfeld’s memorial, and Ariana Grande, who pulled a look for her birthday. Other high-profile clients include Kourtney Kardashian, Bella Hadid and Priyanka Chopra.

By:Fashionaholic will later bring luxury ski apparel to Aspen, Colo. for a pop-up rental in partnership with the St. Regis as early as this year, followed by a New York showroom next year.

Mandell, who bootstrapped to start By:Fashionaholic, found herself in the luxury rental business through an interesting path. A lover and wearer of designer fashion, she was a fashion blogger for three years. Blogging, however, wasn’t her passion and her particular focus in fashion wasn’t translating.

“It didn’t work for me because I was high fashion so it was really hard for people to relate,” Mandell recalled of the time. “Bloggers now if they’re off brand, it could be the end of their blogging career. At that time, I wasn’t interested in monetizing. I was more interested in the creative aspects and I felt really lost, so I’m glad I found the path that I’m on now.”

As her closet continued to grow with couture, more and more of her friends would ask to borrow pieces for special events.

“Eventually, it started happening more and more and I wondered if there’s a market for couture, high-end rentals,” Mandell said.

Certainly there’s Rent the Runway, Armarium and Albright Fashion Library, which opened a West Coast outpost in Beverly Hills last fall. Mandell thinks her competitive advantage is the large selection of Chanel, Prada, Balmain and many other designers across multiple styles. By:Fashionaholic is also democratic in that its doors are open to anyone, she pointed out. 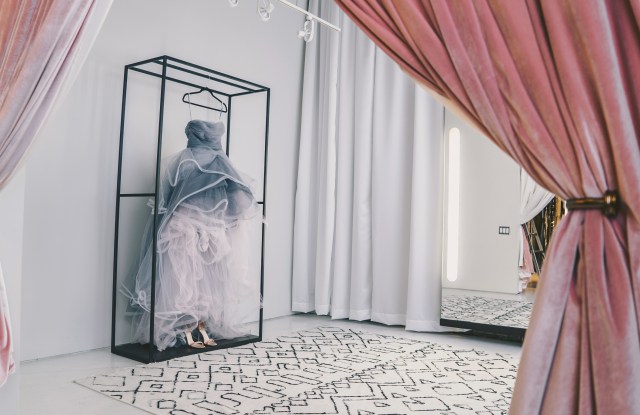 The business sees its share of celebrities and clientele of women who regularly attend special events. The L.A. showroom is expected to be a major source for red-carpet events and Mandell and her team will soon figure out what else makes the brand’s clientele tick in each market where it operates.

Mandell noted the team now better understands the Chicago client, who is looking for a pretty dress, whereas in L.A. it’s very designer-focused. As soon as an L.A. client puts a dress on, they want to know the designer.

“We’re very good at curating depending on the client,” Mandell said. “We also buy on a weekly basis. We don’t buy per season so we don’t follow the season or the trend. We buy things from 2012 or 2019 or 1990; it depends on what we think works for the customers. Most of the celebrities down in L.A. do not want anything that’s current. Bella [Hadid], Gigi [Hadid] they want vintage pieces. Things that most people can’t find. Chicago’s very Midwest. They’re not willing to change too quickly. There’s a ton of money here [in Chicago] and there are groups of really fashionable women.”

About half of the company’s traffic is repeat customers, who frequent it an average of six times a year, with the remaining 50 percent of the client base new to By:Fashionaholic.

With the Los Angeles showroom’s opening, By:Fashionaholic will reveal a September web site revamp. The site is already a place where many of the company’s regular clients who know their sizing well across designers feel comfortable enough to rent online.

Mandell and her team of about 10 are developing pricing packages and a subscription model. The first of those programs is likely to be a wedding package, given the volume of women who come in for that occasion needing four or five outfits.

The company has yet to raise outside capital. Whether there’s a need to do so in the near term depends on how L.A. fares, but Mandell is focused more on not expanding too quickly or losing her close client relationships.

“We decided not to have capital raised only because I’m not interested in selling this business in five years. Most people who have a start-up have investors and then usually in five to seven years they’re slated to sell. I’m not interested in selling,” she said. “It’s kind of like a family business where you grow with your company and I’m hoping one of these days if my daughter’s interested, she’ll take it over.”