A representative of the French market authority calls for the maximum penalty of 10 million euros. 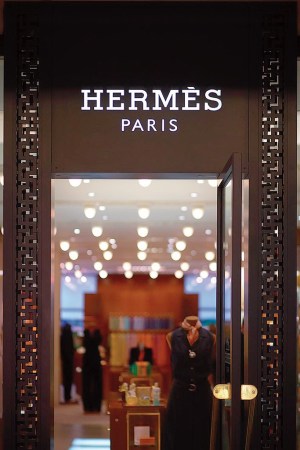 That’s the amount the board of France’s stock market watchdog, the Autorité des Marchés Financiers, recommended LVMH Moët Hennessy Louis Vuitton be fined over its acquisition of a major stake in rival Hermès International. It’s the maximum fine that could be imposed given the timing of the stock purchases.

But at a hearing Friday at AMF headquarters here, LVMH came out swinging in its vehement denials that it breached market rules. The company is accused of dissimulating its gradual acquisition of Hermès stock via cash-settled equity swaps between 2001 and 2010.

At proceedings that extended all day and well into the evening, LVMH’s lawyer Georges Terrier, as well as the company’s vice president Pierre Godé and its finance director Jean-Jacques Guiony, elaborated their defence.

LVMH crux of the hearing centered on whether LVMH dissimulated its intentions to build up a significant share of its rival’s stock using a series of complex financial instruments, via various foreign subsidiaries and through several banks, in accumulations below mandatory disclosure thresholds for public companies.

LVMH is accused by the AMF’s board of having clear intentions of building up its stake in Hermès no later than June 21, 2010, the date of a phone call between one of its employees and a financial institution allegedly discussing the implications of the potentially growing stake, should the equity swaps be converted into Hermès shares. LVMH did not release an official declaration of its participation until Oct. 21, 2010, after the company claims it had made the decision to convert the cash-settled equity swaps into Hermès shares.

The group contends it had not begun to prepare such an operation before that date.

“[This is about] the information given to the public as soon as the preparation of the conversion [of the cash-settled equity swaps into shares], as soon as it could have an influence on the market,” said AMF board representative Philippe Adhémar.

“No evidence was found internally within LVMH determining the preparation [of the acquisition of the stake] before Oct. 21, 2010,” Terrier argued — an opinion countered by the AMF’s board, which considers that given regulations on transparency for listed companies, a declaration should have been made no later than June 21 of that year.

He repeatedly argued that the AMF had found no proof of the allegations, and that any decision would only be based on clues.

AMF’s board requested that the market body’s sanctions committee, which must deliberate following the hearing, fine LVMH 10 million euros, or $12.99 million at current exchange, the maximum fine possible under law applicable at the time of the events concerned.

French law on declarations concerning equity swaps has since changed, as has the maximum fine, which is now 100 million euros, or $129 million. “A lot has changed following this case,” said one observer close to LVMH.

The case pitting LVMH against Hermès could set a precedent in France, as the AMF’s upcoming decision has wide implications surrounding a company’s obligation to report its strategic intentions, thus potentially creating confidentiality issues that have not existed in the past.

Adhémar advised the AMF’s enforcement committee to apply the maximum fine to the French luxury giant “given the gravity of the omission.”

“At no moment did we have the aim of growing [our stake],” Godé insisted in LVMH’s defence. “It was opportunistic. The progressive steps were made one after another, we never had a global vision.”

To the suggestion that LVMH’s aim had been a covert attempt at a takeover, Godé countered: “Hermès is a company that is particularly well protected [due to its shareholder structure]. We could have no hope of exercising any influence….It would be crazy to attempt a takeover bid on Hermès.”

During the hearing, Godé revealed that discussions have been held with Hermès more recently concerning the potential sale by LVMH of a portion of the Hermès stock it owns, which at Dec. 31 last year stood at 22.6 percent.

“The Hermès family has asked us if we would accept to reduce our stake, to 15 percent in the first instance,” he said. “We said, ‘Why not?’”

He did not specify when the meeting or meetings had taken place, or a time frame for any potential agreement.

Earlier in the day, Terrier and Godé had urged that the procedure be annulled, saying it was impossible to have a fair trial.

“LVMH has been the subject of a damning media campaign, led by Hermès, for months,” he said.

Terrier accused the AMF of being biased in its investigations into LVMH’s acquisition of 17.1 percent of Hermès via cash-settled equity swaps, and said that Hermès had tried to influence the proceedings.

“For more than two years, one of [Hermès’] executives has been waging a campaign of denigration and slander against LVMH that is extremely detrimental to LVMH’s image and reputation,” Godé added.

Despite this accusation, Hermès itself remained silent during the proceedings, with the company’s lawyer Philippe Ginestié seated in the public gallery and no company representative speaking at the hearing.

Claude Nocquet-Borel, the president of the AMF enforcement committee, which must now deliberate on the case, said that LVMH’s complaints about the procedure would be heard at the same time as the rest of the arguments.

Following the hearing, Nocquet-Borel declared that the enforcement committee would reveal its decision no later than July 31.

The AMF’s investigation, launched in November 2010, suggested LVMH began building its stake in Hermès as far back as 2001 via various offshore subsidiaries. The company resumed its quiet accumulations in 2007 via equity derivatives through financial intermediaries, according to the AMF.

LVMH surprised markets in October 2010 when it revealed it had amassed a 17.1 percent stake in Hermès via cash-settled equity swaps that allowed it to circumvent the usual regulations requiring firms to declare share purchases. As of Dec. 31 last year, it had raised its stake to 22.6 percent.

Hermès filed a criminal complaint against LVMH last year, accusing its rivals of insider trading, manipulating share prices and dissimulating its investment in the company.

LVMH in turn filed a suit against Hermès for slander, blackmail and unfair competition.

Hermès executives have repeatedly urged LVMH to reduce its shareholding, while the French luxury group insists it only has peaceful intentions and wishes to cooperate with the family-controlled maker of Birkin bags and silk scarves.

Last year, Hermès grouped family-owned shares into a nonlisted holding company to gird it against further advances by LVMH — a move Godé praised during the hearing, saying that in the circumstances, he would have done the same.

The Dumas, Puech and Guerrand families collectively own more than 70 percent of the shares in Hermès, a limited partnership structure that guarantees they keep control of management.

The H51 holding company groups 50.2 percent of the firm’s capital and has priority purchasing rights on the remaining shares held by the family members participating in the initiative — some 12.6 percent of capital.