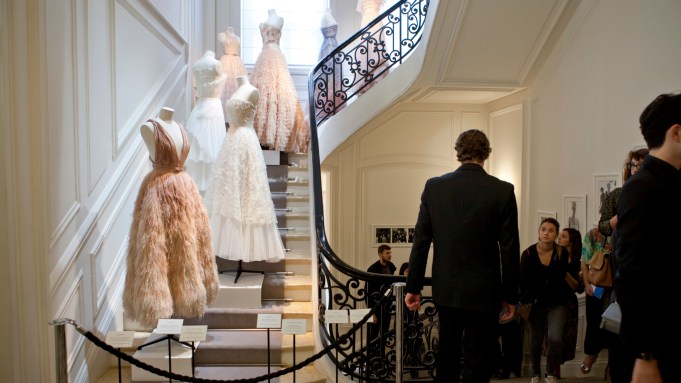 PARIS — The long queues in front of leading luxury stores in Paris this weekend might suggest they were holding the high-end equivalent of a Black Friday sale.

But the crowds gathered outside Dior headquarters on Avenue Montaigne, the Guerlain flagship on Avenue des Champs-Elysées or the Chaumet salons on Place Vendôme weren’t looking to part with any cash — just to catch a glimpse behind the scenes of some of the 70 brands that form LVMH Moët Hennessy Louis Vuitton.

From Oct. 12 to 14, the world’s biggest luxury group held the fourth edition of its Journées Particulières open-doors event, which gives members of the public worldwide a rare opportunity to meet the craftspeople who make everything from Louis Vuitton handbags to Tag Heuer watches and Berluti shoes.

The event is the brainchild of Antoine Arnault, head of communication and image of LVMH, who launched the biennial initiative in 2011 to counter a perception that the group was only interested in making money. It has steadily grown in size, with this year’s edition drawing a record 180,000 visitors, up from 145,000 in 2016.

Arnault kicked off proceedings with a cocktail party on Thursday at the group’s headquarters, where he posed with his father, LVMH chairman and chief executive officer Bernard Arnault, alongside dozens of craftspeople — some still wearing their workshop aprons — in the building’s inner courtyard.

“What is different this time around is that there are a lot more houses taking part, so there’s a lot of expectation and an even greater responsibility on our shoulders,” said Arnault, flanked by his partner Natalia Vodianova, the Russian model who has been a face of Guerlain for 10 years.

For the first time, the free event spread to the U.S., Latin America, Australia and New Zealand, with 14 countries taking part, versus six in 2016. In total, 77 venues welcomed visitors, starting with the Cloudy Bay vineyard in New Zealand and ending with the Benefit Cosmetics headquarters in San Francisco.

However, the underlying format of the initiative remained unchanged.

“The feedback we got from our teams was basically, ‘Keep things as they are, and above all, don’t try to reinvent something that’s already working very well,’” Arnault said. “Obviously, we try to ensure that logistically, it’s even more comfortable for visitors and the visits are even more interesting for everyone concerned.”

This time, LVMH allowed applicants to create a profile on a dedicated web site beginning Sept. 13 in order to make it easier to book priority access tickets on Sept. 22 and 25. Still, Arnault admitted that tickets to the hottest venues — the Dior couture atelier and the Vuitton leather goods workshop — were again snapped up in record time.

“We had tens of thousands of online applications,” Arnault revealed. “The Vuitton visits were gone in less than a minute, so you really had to be in front of your computer at 10 a.m. precisely on that day. It’s a little unfair, but we haven’t found a better way to do it.”

A number of sites were also open without reservations, with 3,000 staff and artisans on hand to welcome the public. On Friday morning, Arnault began three days of site visits at the workshops of Berluti, personally greeting the first groups of visitors to the exclusive shoemaker, of which he has been ceo since 2012.

Then it was across the Avenue des Champs-Elysées on foot to the Guerlain store, where perfumer Thierry Wasser and creative director Olivier Echaudemaison were on hand to provide insights into the history of the house, which is celebrating its 190th birthday with 1,100 fragrance creations to its credit.

Wasser noted that until recently, perfume formulations were handed down orally from generation to generation. “Today, should something happen to us — heaven forbid — there are procedures in place and all the instructions have been committed to paper,” he told a group of visitors.

Echaudemaison explained that Guerlain was the first to produce lip tint in stick form in the 19th century. “The strength of Guerlain is to have created products that are mythical today, but that nobody knew before,” he said, adding the house’s Terracotta bronzing powder and Météorites highlighting powder to the list.

Arnault watched as an artisan demonstrated how perfume bottles are sealed with gold thread. Soon, it was on to the next destination: the Chaumet headquarters on Place Vendôme, where he paused to snap a picture on his cell phone of the crowd beginning to gather on the historic square that is home to France’s leading jewelers.

Inside, groups lined up on the carpeted stairs leading to spectacular 18th-century reception rooms, where artisans lifted the lid on the history of the 235-year-old house, famed as the official jeweler to Empress Joséphine. A group of women listened in wonder as a stone setter explained that he picks up gemstones with a tool made of a mixture of wax and cigar ash, to prevent them from sticking.

It’s the kind of one-of-a-kind creation that is beyond the reach of all but the world’s 1 percent, but then again, the Journées Particulières event is not designed to recruit new customers, according to Arnault.

“We’re not trying to sell a single extra pair of made-to-measure shoes. That might be a consequence in five years’ time, who knows? But I’m not really concerned with that,” he explained.

“If our customers want to come, they’re welcome, but this is not aimed at them. Our customers are already very well taken care of. If an important client really wants to see the Dior or Berluti workshops, 99 percent of the time, it can be arranged. This is for people who are not privileged every day. It’s for people who are interested in the heritage and the history of these houses,” Arnault added.

And at the Sephora headquarters in the Paris suburb of Neuilly-sur-Seine, visitors heard about fledgling brands involved in the company’s accelerator and mentorship programs, some of which have not yet been launched and were being presented by their founders to the public for the first time. These included BeautyMix, Saisons d’Eden, Anju Rupal, pH Fragrances, Zeto and Ho Karan.

Chris de Lapuente, the retailer’s ceo, said he believes that Sephora, now in 34 countries and commanding some 10 percent of the prestige beauty market, “will be present in every single country of the world” one day.

For those unable to join a visit, LVMH has produced a podcast series, “Confidences Particulières,” featuring conversations with artisans such as winemakers, makeup artists, seamstresses and enologists. The episodes are available on the Journées Particulières web site, as well as Soundcloud, Podcast Addict and Apple Podcasts.

Featured personalities include Jean-Claude Biver, the watchmaking veteran and industry leader who recently stepped down as head of LVMH’s watch division, and perfumer Francis Kurkdjian, whose independent house was snapped up by LVMH last year.

Arnault said the group’s artisans regularly thank him for opening up their secretive and highly specialized trades to a wider audience. “They can invite their family and friends,” he noted. “You can really tell that it’s more than a job for these people — it’s a passion, so it’s a beautiful thing to share.”