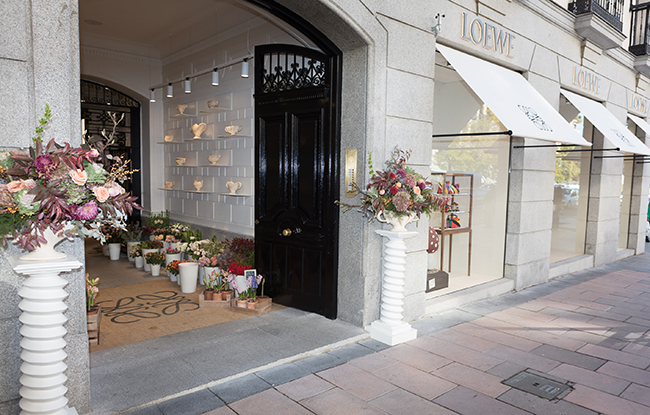 MADRID — “When I go to London, I think Burberry. When people come to Spain, they should think Loewe,” Jonathan Anderson declared Thursday.

It would be nearly impossible to arrive in Madrid this week and not encounter the name of one of the oldest handbag companies in the world, founded in 1846. Nearly every back-lit billboard at the airport broadcasts Loewe products and arty photography. Market areas got street posters. The club district? Loewe graffiti. And who could miss the skyscraper plastered with a Loewe fragrance advert?

The onslaught coalesced with a bouquet of events and milestones for the brand, which is owned by French luxury giant LVMH Moët Hennessy Louis Vuitton.

The centerpiece is Casa Loewe Madrid, the brand’s first flagship in Madrid and its largest store in the world. It’s also home to the first Loewe flower shop, all at the foot of the brand’s head office in a landmark 19th-century building.

Side events included the opening of a monthlong exhibition at the Real Jardín Botanico de Madrid; the launch of a book charting Loewe’s “Past, Present and Future,” and a large-format calendar by Steven Meisel, a co-conspirator in its image overhaul.

“If it was only about fashion, it would be really boring,” he said in an interview in the basement men’s department, which repurposed Perspex seating cubes from Anderson’s last Paris runway show as coffee tables. One was stuffed with pot scrubbers; another with disposable Bic razors.

In Anderson’s estimation, consumers are expecting more from luxury brands, and impersonal doesn’t cut it anymore. They want connections, content, surprise and narrative.

“No one wants to see a void. They want it to be full of something, enriched,” he said, cupping his hands for extra effect. “It’s not about luxury brands. It’s about cultural brands.”

The Loewe store, which unfurls over three levels, showcases more than a dozen artworks, from a monumental Howard Hodgkin print of colorful splotches that dominates the accessories atrium to a wall of crimped ceramic tiles on the women’s floor by Gloria Garcia Lorca that sums up the store’s earthy, natural character. Instead of slick marble, Anderson went for stucco walls, limestone floors, dark wood panels and sunny floor tiles.

A spiral, Georgian-style staircase made of interlocking blocks of stone telegraphs the designer’s fascination with high craftsmanship — also at the root of Loewe’s approach to leather goods.

He noted materials to build the store were sourced locally for ecological reasons, and also accentuate the “chilled-out” atmosphere he was after.

The cozy mood is heightened by the natural light the corner location affords; the club chairs dotted here and there, and the playful displays, with leather elephant and frog pouches lined up on shelves and mannequins dressed in cozy coats and hugging each other.

Anderson characterized the flower shop as an extra “welcoming” feature. “I feel like the flower shop makes this corner feel more personal,” he said. “It’s something to engage with. I like the fact that you can buy a flower for five euros [about $6] and have it beautifully wrapped.”

The designer said he devoted 18 months to the project, collaborating with in-house architects to reconfigure the building, which previously housed a men’s store. A separate women’s unit on a nearby corner was shuttered as it is now part of the larger flagship.

“How do you make a brand feel vast, but compartmentalized?” was the design challenge he set for himself.

“I wanted something in Madrid that Spain would be proud of,” Anderson said. “Our figures have grown in Spain and I want to continue that. We’re also seeing a big growth in younger people coming to Loewe, which is inspiring to me.

“The brand is different than it was three years ago,” he continued. “I think we’re starting to build our vocabulary of how brands operate today.”

He noted that his Puzzle and Hammock bags now each outsell the Amazona, which had been Loewe’s perennial bestseller practically since its launch in 1975. “It’s our hometown,” was how Pierre-Yves Roussel, chairman and chief executive officer of LVMH Fashion Group, explained the full court press of events and the major retail statement in Madrid, where Loewe is also painstakingly restoring its historic location back to how it looked when it opened in 1939.

Flipping through the large-scale book, he showed how Anderson incorporates design elements from the past into modernized stores. “He’s continually assembling things from a lot of different perspectives,” he said. “He really takes a 360-degree vision on the brand.”

Telephone-book thick, the tome also documents Loewe’s impact in the U.S., with photos showing Hillary Clinton receiving a Loewe scarf as a present when she was First Lady and President-elect Donald Trump, with Ivana on his arm, when a Loewe opened a boutique in Trump Tower in the Eighties.

Guests at the opening cocktail included Juliette Binoche. “I just finished a French TV series called ‘10%’ (Dix Pour Cent) and am enroute to Los Angeles to wrap up ‘Ghost in the Shell’ with Scarlett Johansson,” she said. Next up, “a film directed by French director Claire Denis.

“I’m here because I have a soft spot for Loewe and tomorrow, I’m getting a prize from Women in Action which is a Spanish organization. It’s not an acting prize; it’s a woman’s prize,” she added.

Later, guests repaired to the exhibition, with Meisel photos in one wing of a pavilion; the other boasting fashion imagery on the floors and walls with displays of Loewe objects and handbags intersecting the room.

Models Mica Arganaraz and Paul Hameline clustered around the deejay booth as Michel Gaubert pumped out dance music from the Eighties and Nineties.

Luke Evans just wrapped a slate of movies including “Professor Marston & the Wonder Women” opposite Rebecca Hall – and involving lots of tweed. “It’s set in the Twenties so it’s three-piece suits,” he grinned.

The Madrid events coincide with the arrival of a new ceo, Pascale Lepoivre, who joined Loewe in September after a long career at Céline and Louis Vuitton.

Spain and Japan, not long ago the predominant markets for Loewe, now account for less than half of revenues as the company expands in Asia, Europe and elsewhere. Additional locations in the U.S., a second store for Paris and a bigger London footprint are among future expansion vectors, Roussel noted.

“We have great traction. And there are many entry points to the brand now,” he said, noting that ready-to-wear, animal pouches, gifts and a wider range of leather goods are widening Loewe’s reach.

Citi estimates the brand will this year generate revenues of 232 million euros, or $259.4 million at average exchange rates.

The company counts 128 boutiques and shops-in-shops in the world, including about 22 in Spain.