The second edition of Les Journées Particulières drew more than 120,000 people to the French luxury giant's ateliers and other facilities.

By Miles Socha and Jennifer Weil on June 17, 2013
View Slideshow 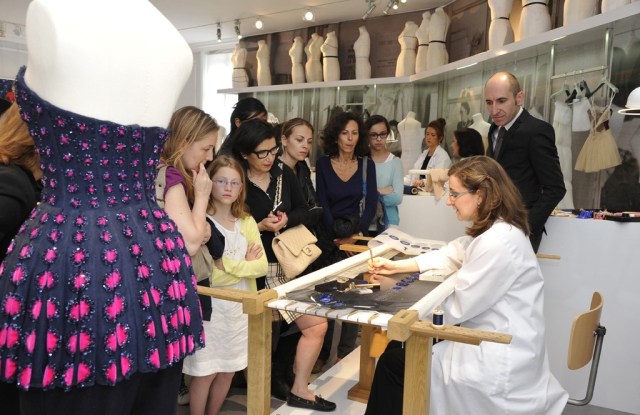 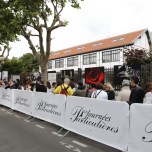 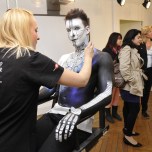 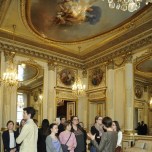 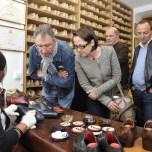 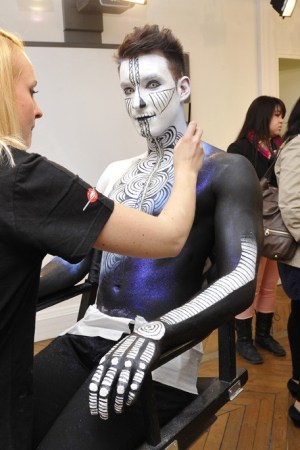 A makeup artist shows the possibilities of body paint. 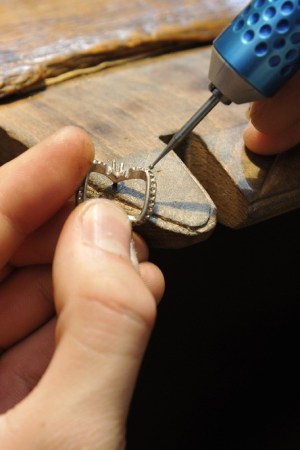 A worker at Chaumet mounted diamonds in a ring. 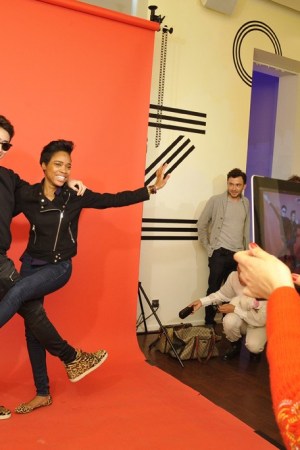 Posing for a mock ad at Kenzo.

PARIS — The popular science program “How It’s Made” should consider a luxury spin-off for European audiences.

“Seeing is believing, and this is where the magic of luxury lies today,” said Antoine Arnault, chief executive officer of Berluti, the elite cobbler he’s transforming into the group’s luxury lifestyle label for men. “This savoir-faire demonstration is inspirational to young people looking to work in craftsmanship careers. It also illustrates how the savoir-faire is at the core of our métiers.”

Son of business titan and LVMH chairman Bernard Arnault, he spearheaded the “open doors” initiative at the family-controlled firm. The first edition in 2011 attracted close to 100,000 visitors.

On Saturday, as the queue lengthened to beyond three hours of waiting time outside of Vuitton’s workshop in Asnières, Arnault estimated that if registration were unlimited, the weekend program could easily attract at least half a million people.

The second edition of Les Journées Particulières involved 42 sites in France, Italy, Spain, England, Switzerland, Scotland and Poland, and has taken on political significance in Europe amidst soaring unemployment across the Continent, still struggling with sluggish economies and onerous debt loads.

The operation also casts light on the working conditions for skilled craftspeople in Europe — in historic buildings of architectural splendor, or bright modern facilities with floor-to-ceiling windows and verdant grounds ringed with rose bushes, as is the case at Vuitton’s Asnières facility.

The contrast could not be more dramatic to the haphazard, overcrowded sites in Bangladesh that have crumbled or burned this year, claiming the lives of more than 1,000 workers and giving apparel production a black eye.

On Friday night, László Andor, European commissioner responsible for employment, social affairs and inclusion, sidled up to a table at Dior’s gilded salons on Avenue Montaigne to learn about the nine hand-wrought steps that go into creating a Dior Homme jacket, each requiring six hours of factory time. He leaned over to inspect the chevron stitches that coax a lapel to curl back and lay flat against the chest.

At another table, a woman wielded a small curling iron, crimping the delicate lace edging a children’s christening gown: Each takes about a week to realize upon special order, at a cost of 8,000 euros, or $10,675 at current exchange.

Andor said the luxury sector is proving how “the cultural heritage of Europe” has been transformed into a thriving global enterprise, while other industries continue to suffer “problems of competitiveness.”

In France, LVMH employs 22,000 people at 52 production sites and 400 stores and showrooms, hiring about 3,000 additional people each year.

Arnaud Montebourg, France’s minister of industrial and a vocal champion of the Made in France label, turned out bright and early Saturday morning for Vuitton’s first tour, at the elbow of Patrick-Louis Vuitton, who heads up special orders for the luxury group. He learned how crocodile skins take on a luster when rubbed vigorously with an agate stone, and watched a worker tug yellow thread through pancake-thick trunk handles.

“Is this printed leather?” he asked as he fingered the supple canvas bearing Vuitton’s famous monogram, which was about to be applied to a hard-sided briefcase.

In an impromptu speech after watching golden nails hammered into trunks and handbag handles molded around cord, he congratulated Arnault and Vuitton ceo Michael Burke for the “fundamental role” such enterprises play as a “locomotive” for economic growth and a calling card for French culture and know-how.

Craftsmanship emerged as a key talking point for luxury goods players in the wake of the global financial crisis in 2008 and 2009.

Burke, then ceo at Fendi, said he and designer Silvia Fendi detected the end of a business cycle, and dispatched its Italian craftsmen around the globe to demonstrate how the company’s high-end Selleria bags are made.

“Very few companies can build a bag up from leather, string and a bit of hardware,” he said, crediting “uncertain times” for fanning consumer interest in how goods are made.

Artisanal pride is swelling, too.

“They all volunteered to work,” Burke noted Saturday as dozens of men and women manned their stations at Vuitton, including trainees at its in-house school for leather craftsmen. “Not only did they volunteer to work on a Saturday, they said, ‘I want to do both days.’”

Engineering students from some of France’s top schools were invited to tour Dior’s demonstrations last week ahead of public tours, and their eyes widened watching how workers selected, cut and shaped leather to create Lady Dior bags, according to Dior ceo Sidney Toledano.

“Excellence is based on creativity and tradition,” he explained. “I think people are going back to real values, and Asia is also driving this: They want culture. They don’t only buy brands, but they buy the culture and know-how behind it.”

In recent years, Europe’s leading luxury players have stepped up efforts to communicate their craft skills and heritage through advertising campaigns, in-store demonstrations, exhibitions and installations.

Examples include the weeklong Festival de Métiers mounted by Hermès last month at the Saatchi Gallery in London, or Gucci’s “artisan corners” that have traveled around the world with company craftsmen showing their production skills at about 25 to 30 events a year since 2009.

French fashion’s organizing body, the Chambre Syndicale, just added 10 specialty ateliers to its official calendar for couture week, July 1 to 5 in the French capital, putting by-appointment tours of shoemaker Massaro and embroidery house Lesage on the same footing as runway shows by the likes of Chanel, Valentino and Giorgio Armani.

“Without this industry, many of these centuries-old crafts would not have survived to today,” said Antoine Arnault, who invited the public to visit Berluti’s bespoke shoe workshop on Rue Marbeuf. “At Berluti, our apprentices are ‘Meilleurs Apprentis de France.’ It is a label of French excellence.”

Such efforts seem to be having an impact on public sentiment. More than 75 percent of Europeans view the high-end products industry as key to Europe’s cultural and economic future, according to a study presented to European Parliament last month. In a survey of 5,000 Europeans across five countries — the U.K., Italy, Germany, France and Spain — 77 percent said European high-end goods were important for employment and growth, up from 69 percent in a similar poll taken in 2009. Seventy-four percent said high-end goods were key to Europe’s global competitiveness.

The study was conducted by polling firm TNS Sofres for the European Cultural and Creative Industries Alliance, a consortium of five national European luxury goods associations.

Over the weekend in Paris, there were various marvels on display.

At Chaumet, Béatrice de Plinval, the Place Vendôme jeweler’s conservator, led groups through its gilded 18th-century salons, tapping one glass display case to make tremble the 32-carat sapphire studding a brooch, circa 1867, in the shape of a peacock feather.

Across town at Makeup Forever, a technician drizzled oils and pigments into a beaker to create a searing pink lip gloss, while upstairs special-effects artists applied makeup to a young man who looked as if he had messily extricated an electronic mechanism from his chest cavity, à la Iron Man.

Over at Kenzo, one eager fashion student showed up at 7 a.m. to be first in line — and to inquire about internship opportunities. Inside, visitors could take in a hologram fashion show to a thumping M.I.A. soundtrack, or pose in a mock Kenzo campaign at an on-site photo studio.

Fendi welcomed the public to four sites: its leather goods atelier in Florence; a shoe factory in Porto San Giorgio; fur and Selleria ateliers at Rome headquarters, and its sprawling Rome showroom, where the resort collection is displayed, giving the public a chance to step into the role of a fashion buyer.

Pietro Beccari, Fendi president and ceo, said consumers buy luxury products not only for their fashion appeal, but for the intrinsic value of noble materials and elite manufacturing. “It’s an added value for customers,” he stressed.

To wit: Fendi recently renamed its key Selleria bags after the founding Fendi sisters — and the number of hand-wrought stitches each requires, as in the Anna 1,322.

“It’s part of the magic of a luxury house,” Beccari enthused. “It’s reassuring on one side, and fascinating on the other.”

Guerlain, participating in the event for the first time, opened the doors of its Orphin site, where fragrances are made and bottles of extract hand decorated. Perfumer Thierry Wasser said the event was fully subscribed within less than four minutes.

“We have noted that our clients in general and in particular those in our boutiques who buy our [collectable] flacons d’exception want to discover the savoir-faire that has been behind our products for 185 years,” said Wasser.