By Miles Socha and Samantha Conti on February 20, 2015
View Slideshow 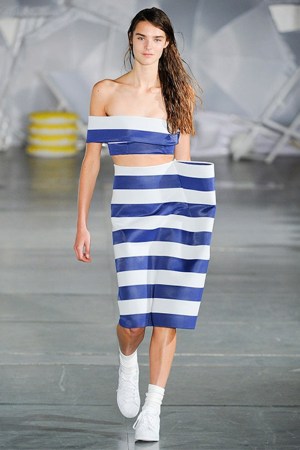 PARIS — The short list for the second annual LVMH Prize gives a snapshot of where young designers are today: from all corners of the world, fascinated with men’s wear, streetwear and unisex concepts.

The 26 semifinalists include New York label Baja East, a self-described purveyor of “loose luxury”; Copenhagen-based Astrid Andersen, a maven of logo-heavy sportswear, and Canadian men’s wear designer Devon Halfnight Leflufy, who is based in Antwerp, Belgium.

“It shows they have a lot of potential that they were selected again this year — and how they’ve grown and clarified even more their vision,” said Delphine Arnault, second-in-command at Louis Vuitton and a key talent scout at the luxury group her family controls, LVMH Moët Hennessy Louis Vuitton.

The prize is open to designers under age 40 who have presented and sold at least two collections of men’s or women’s ready-to-wear. Arnault said almost 1,000 designers applied, signaling “a great interest from young talents to get support from LVMH. As the leader in our industry, it’s our responsibility to identify young talents and help them grow.”

The soft-spoken executive rattled off a United Nations of nationalities among contenders, with the short list including designers hailing from China, Ukraine, Austria, France, Hong Kong, Portugal, Germany, Japan and the U.S., although the lion’s share are now based in the fashion capitals of London, New York, Paris and Milan.

“It reflects the diversity of fashion today,” said Arnault, noting an uptick in men’s wear specialists and designers from Asia. “There’s a lot of talent in women’s wear, but also in men’s wear.”

Written Afterwards by Yoshikazu Yamagata of Japan and the Baja East duo of Scott Studenberg and John Targon are listed as unisex designers, which Arnault described as clothes that are for “any gender.”

LVMH plans to fly all semifinalists to Paris, where the luxury giant is to host a two-day showroom at its Avenue Montaigne headquarters. There, members of an “expert committee” are to meet the designers, inspect their clothes and cast their votes to whittle the list down to 10 finalists. The winner is to be revealed in June.

Three recent fashion graduates are also to be recognized with a grant of 10,000 euros, or $11,385, each and a one-year placement on the design studio of an LVMH brand. Online applications for this competition are open until May 3, with 300 already having thrown their hats in the ring.

Arnault and other LVMH brass are to host a cocktail party for the short-list talents on March 4. “It brings them a lot of exposure. For them, it’s a great opportunity to meet so many people who are part of the fashion industry,” Arnault said.

Special jury prizes of 100,000 euros, or $113,870 plus mentoring, were awarded to Hood by Air designer Shayne Oliver — who went on to stage a presentation for his women’s wear in Paris — and upstart brand Miuniku, which plans to relocate to London from Mumbai this summer to be closer to Europe’s key fashion hubs. Sisters Nikita and Tina Sutradhar are to exhibit their fall 2015 collection in Milan at the Vogue Talents Corner, and in London for spring 2016.

“Before the prize we only had one stockist and a few personal-order customers. After the prize, we now have 12 stockists worldwide and international press recognition,” said Tina Sutradhar. “Without the prize, we wouldn’t be able to make new collections or do sales. We are so grateful to receive the mentoring as well. For us, since we are a young brand, we had so many questions regarding how we should go about things. It is very reassuring and helps a lot to get advice and direction from highly experienced mentors, about what is the next step to take.”

Porte Jacquemus said he entered the race again given that his independently owned fashion house is growing quickly, already shipping to more than 90 doors.

“I focus on the positive things that happened last year, like the feedback of all the experts, meeting Delphine Arnault, etc., and I decided to apply again,” he said. “The attraction is clearly the financial help today.”

“The prize would be life-changing for a small business like ours, so we wanted to give ourselves another chance. The prize is not to be sniffed at,” said Green.

Green’s label is receiving support from the Centre for Fashion Enterprise, including a free studio for two years, public relations support, discounted legal and accounting services, and mentoring. The label’s London Fashion Week show is sponsored by NewGen and the brand made its debut at London Fashion Week through the Fashion East collective show.