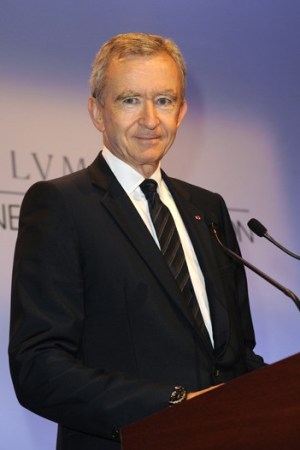 PARIS — The economic recovery may be hiccuping, but the prospects for the luxury sector keep brightening.

This story first appeared in the July 28, 2010 issue of WWD. Subscribe Today.

On Tuesday, LVMH Moët Hennessy Louis Vuitton reported a 52.8 percent leap in first-half profits and said July kept the same pace as the first six months of the year, when revenues rose 16.5 percent.

“The numbers speak for themselves,” said a sanguine Bernard Arnault, president and chief executive officer of the French luxury giant, addressing analysts at LVMH’s art-stuffed headquarters here. “We are fairly confident for the second half.”

The buoyant LVMH results follow strong showings by other European luxury players. Sales at Hermès International jumped 27 percent in the second quarter, while Burberry posted an overall 30.6 percent sales increase in its first quarter. Further good news from the luxury sector could come Friday, when French retail-to-luxury conglomerate PPR is due to report first-half profits and sales.

Despite the strong first-half performance, Arnault, like other industry executives, cautioned the global economic picture remains “uncertain.” But he noted, “We have reason to believe business will be buoyant.”

Indeed, he noted that “demand is greater than supply for certain products. It’s an enviable challenge, I would say.”

On cue, giant screens flashed images of new workshops and tanneries in France and Belgium for Louis Vuitton, which kept up its double-digit pace of sales growth and powered the fashion and leather goods division to a 17.7 percent gain.

Arnault also boasted that the latest vintage of Cheval Blanc, priced at 600 euros a bottle, or about $775, “sold out in 10 minutes. There is big demand for high-quality wines.”

Arnault stopped short of giving precise earnings or sales guidance for the year, however, saying, “Thanks to the crisis, we don’t do forecasts anymore.”

Like other luxury players, LVMH benefited from currency tailwinds, which added 116 million euros, or $154.3 million, to the bottom line in the half.

Currency conversions were made at average exchange rates for the periods to which they refer.

In organic terms, meaning with like-for-like structure and at constant exchange rates, the revenue increase stood at 14 percent.

LVMH cited an end to the destocking phenomenon last year that led to steep revenue declines for liquors and timepieces. For example, sales of perfumes and cosmetics rose 16 percent in local currencies in the U.S. in the half, led by the star brand Christian Dior, which will have a new “muse” for Miss Dior Chérie perfume in the second half. It will be Natalie Portman, who was recently in Paris shooting a commercial directed by Sofia Coppola, according to a Paris source.

The robust results fueled a strong cash flow, helping LVMH reduce its gearing as of June 30 to 16 percent, with net debt of 2.56 billion euros, or $3.13 billion, and raising speculation of a share buyback, payout or acquisitions.

On the latter subject, Arnault, responding to a question from the audience, said LVMH had no interest in acquiring French beauty giant L’Oréal, but he danced around other possible targets. “Either we have plans I can’t reveal or we have no plans, so what can I say,” he replied with a shrug and a big smile.

In a research note, Evolutions Securities analyst Dennis Weber said the sales and profit figures bested expectations by a big margin, but cautioned LVMH is not likely to repeat its strong performance in the second half as comps get tougher.

First-half sales at the Dior fashion house rose 10 percent to 373 million euros, or $496.3 million, with sales in its own boutiques advancing 17 percent.

Dior chief executive officer Sidney Toledano cited strength across all geographic regions, except Japan, with particularly robust business in Asia. Last May, the French fashion house showed its cruise collection in Shanghai and unveiled an expanded store at Plaza 66, and Toledano said the event had a “big impact” on the entire region.

Leather goods headlined the sales gains, along with women’s and men’s ready-to-wear, Toledano noted. Operating profits in the period stood at 8 million euros, or $10.6 million, versus a nil figure in the year-ago half. The improvement reflects an increased gross margin despite high investments in communication and product development, Toledano noted.