Karl Lagerfeld, Frank Gehry and Cindy Sherman are applying their creativity to a new and surprising canvas — Vuitton’s famous brown and gold monogram. 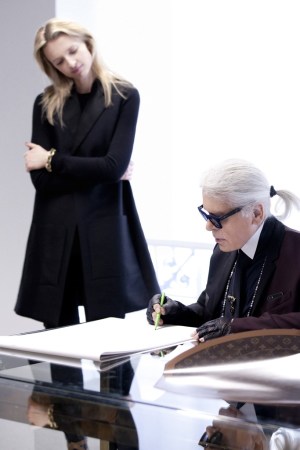 They — along with Rei Kawakubo, Christian Louboutin and Marc Newson — were given carte blanche to create bags and luggage for the French luxury giant. The limited-edition items will arrive in stores in mid-October, bringing high-profile attention to a cornerstone of the brand, which is marking its 160th anniversary this year.

Unveiling the project in an exclusive interview, Vuitton executive vice president Delphine Arnault said the project exalts what she described as “the most desirable icon in the world.”

The collaborative items are to retail from about 2,000 to 4,000 euros, or $2,725 to $5,450 at current exchange rates, dovetailing with Vuitton’s efforts to sell more high-priced leather goods and secure its brand positioning.

Lagerfeld and Sherman also created trunks in numbered editions of 25.

Accompanied by an advertising campaign, a dedicated Web site, commemorative book and launch event in New York City on Nov. 7, the product range represents one of the first large-scale initiatives spearheaded by Arnault, daughter of LVMH Moët Hennessy Louis Vuitton chairman and chief executive officer Bernard Arnault and an emerging force in the luxury conglomerate her family controls.

Arnault spoke excitedly about the opportunity to watch the likes of Gehry and Lagerfeld at work: the former constructing a paper model of his off-kilter design; the latter submitting intricate, hand-colored sketches with precise dimensions.

“We have assembled an amazing group of talents — geniuses, I would say. Each one is among the best in his or her field,” Arnault said. “The monogram is at the center of our house, so we celebrate the monogram every day. But we thought this project was really special because the personalities we chose are fascinating and diverse.”

Arnault made the selections in concert with Nicolas Ghesquière, artistic director of women’s collections, who has demonstrated his affection for the monogram by interpreting it in his first two Vuitton collections, for fall 2014 and cruise 2015.

Arnault related that everyone approached “said yes right away. They were very enthusiastic and very intrigued about how to do handbags and work with the monogram.”

Some have previous ties to Vuitton. Kawakubo, the Japanese fashion maverick behind Comme des Garçons, did some monogram bags she designed for the brand in 2008 for a temporary store in Tokyo. Gehry is the architect behind the Foundation Louis Vuitton, a sprawling art museum slated to open later this year on the leafy fringes of Paris.

Others in the group are considered “friends” of the house and, indeed, many were present for Ghesquière’s debut show last March in Paris, including Louboutin and contemporary artist Sherman. Designing a handbag will be a first for Sherman, whose disquieting self-portraits frequently reference fashion.

Lagerfeld is perhaps the biggest coup for the project, dubbed “The Icon and the Iconoclasts,” given his strong association with Chanel, one of Vuitton’s most formidable luxury rivals. But the German designer has created ready-to-wear and furs since 1965 for Fendi, majority owned by LVMH since 2001, and has forged close ties with the Arnault family.

While Vuitton is keeping images of the products under wraps until the fall, Arnault shared a few details, noting that industrial designer Newson chose to create a men’s bag and that Lagerfeld dreamed up a punching bag. “The name alone is amazing,” she enthused of the latter style.

Michael Burke, chairman and ceo of Vuitton, noted that the “Iconoclast” project celebrates the monogram in a way that defies “the conventions of ‘classic,’” and perpetuates the brand’s spirit of innovation and daring.

“It’s part of the history of the house,” Arnault explained. “A lot of people remember that project, it was really strong. It was when Marc Jacobs was about to arrive at Vuitton and there was no fashion yet. I remember the launch party in Paris with Naomi Campbell arriving on the stage with a live giraffe in tow.”

Arnault scored one of the Alaïa bags, which melded the monogram with leopard spots, and said she always gets asked about the collector’s item whenever she carries it.

The latest Icon bags are meant to be on sale for only a few months, heightening their collectible status, Arnault noted.

She declined to quantify the importance of the monogram to the Vuitton business, but characterized it as an essential ingredient to its success.

“The monogram is the symbol of luxury, a symbol of Louis Vuitton. It’s the son of Louis Vuitton, Georges, who created it in 1896. It’s instantly recognizable and it’s really the essence of our house,” she said.

In a recent research report on LVMH, Citi analyst Thomas Chauvet estimated that within the handbags category, the mix at Vuitton is 50/50 between canvas and leather, and that the gross margin on Vuitton’s leather bags is 10 to 15 points lower than canvas.

He estimates Vuitton generated 2013 revenues of 7.5 billion euros, or $9.96 billion at average exchange.

Given the scale of Louis Vuitton — it boasts some 460 boutiques in the world — the brand has multiple product lines and vectors for expression, including occasional tie-ups with external talents.

“This is a very interesting territory — to have collaborations with exceptional, creative minds,” Arnault commented. “It’s a really fun project. It’s done with a lot of humor.”

Jacobs, Vuitton’s first creative director who exited the brand late last year to focus on his signature house and get it ready for an initial public offering, invited a range of artists to interpret the monogram during his tenure: Stephen Sprouse, Takashi Murakami, Richard Prince and, most recently, Yayoi Kusama.

The one with Murakami, unveiled in 2002, was a blockbuster, generating estimated sales of $345 million in 2003, and making the Japanese artist’s multicolored version of the monogram a permanent addition to Vuitton’s leather goods vocabulary.

“Marc Jacobs has really done a lot in that field,” Arnault said. “It was amazing work that he has done for the brand and our house.

The executive noted that the diverse proposals forced the company’s production, development and industrial teams to “really push boundaries.” For example, Gehry’s handbag design, which Arnault likened to a “small sculpture,” was bespoke to the max, with the architect incorporating a small mirror, hand-drawn LV initials and angular hardware.

“None of the lines are straight. They went through a lot of research to produce it to Louis Vuitton’s high quality standards,” Arnault said.

“I was very intrigued to see how each one worked,” she continued, marveling at the degree of detail each of the participants brought to the task, from the colors of materials to the personal touches.

Lagerfeld, for example, added a secret compartment to the bottom of his bags, while Newson autographed some of the hardware on his. “It was really an honor. I was very impressed,” she said.

While an indelible part of Vuitton’s history, the monogram is somewhat enigmatic, with neo-Gothic style, Japan and tiles in Georges Vuitton’s Parisian home among possible inspirations for the mix of stylized flowers and geometric letters.

And while Vuitton has recently shone the spotlight on hyper-luxurious bag styles like the Capucines and Lockit, with actress Michelle Williams fronting campaigns for them, Arnault stressed that the monogram has “always been at the center of our strategy. It’s part of our history and so it’s always been of the utmost importance for us.”