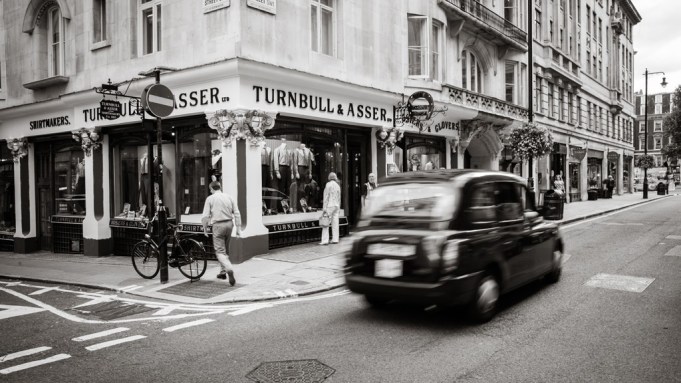 The English shirtmaker and clothier Turnbull & Asser looms so large in British sartorial life that last February Prince Charles visited its factory in Quedgeley, Gloucester. The company has made the Prince’s shirts over the last four decades and was also the recipient of his first Royal Warrant, in 1981. Rather than imperiously tour the factory floor, the heir to the throne took a moment to operate a sewing machine.

After the visit, Turnbull & Asser manager Shaun Bird was asked if Prince Charles’ work was good enough to get him a job. “I’d give him a six-week trial, like anyone else,” Bird replied.

For Prince William and Kate Middleton’s official royal engagement photo, the bridegroom-to-be was fully clad in Turnbull & Asser, save for his shoes. But the company’s legacy extends far beyond the monarchy. Turnbull & Asser has supplied shirts and accessories for every actor playing James Bond since Sean Connery. British Prime Minister Winston Churchill wore a Turnbull & Asser one-piece velvet siren suit throughout the Second World War, which, three decades later, inspired a Turnbull & Asser advertising tagline: “Most people knew Winston Churchill as a great statesman. We knew him as a size 46.”

The company also makes suits, ties, and pajamas, but more than 60 percent of its trade is in shirts. When Michael Douglas, portraying Gordon Gekko, denigrated lunch in Oliver Stone’s 1987 film Wall Street, he did so in a Turnbull & Asser shirt. According to Robert Gillotte, the company’s U.S. senior bespoke manager, the Gekko effect endures. Ninety percent of its American shirt clientele work in finance: “It’s the highflier society guy with money.”

Turnbull & Asser was established in 1885, as a hosier and glove-maker, by Reginald Turnbull and salesman Ernest Asser. John Arthur Turnbull opened in St. James’s, in the center of London, and catered to men-about-town who frequented the West End gentleman’s clubs and theaters. In the twenties, the brand responded to the increasing vogue for dress shirts by shifting to specialize in making the garments. By this time, it had moved its London store location to the corner of Jermyn Street and Bury Street, where it remains.

The company changed hands in 1986, when it was bought by Ali Al-Fayed, the younger brother of Egyptian business tycoon Mohamed Al-Fayed, who, ironically, is a notorious bête noire of the British Royal Family. Ali Al-Fayed’s son James now heads Turnbull & Asser’s operations.

In the U.S., Turnbull & Asser ran trunk sales twice a year in East Coast and West Coast hotels, until 1997, when it set up shop in a five-story town house in midtown Manhattan. Until recently, it also had a store in Beverly Hills.

Unlike competitors such as Thomas Pink and Charles Tyrwhitt, Turnbull & Asser still designs and manufactures its shirts in England. It opened its Quedgeley factory in 2003. The plant employs eighty-six people, mostly women, and has a production capacity of 75,000 units per annum. Think of a factory not too dissimilar to the shoe establishment in the current Tony-winning musical Kinky Boots, except Turnbull & Asser has never fallen on hard times.

While the company makes everything out of the United Kingdom, it now uses high-quality Italian cloth derived from long-staple cotton grown in Egypt, much of it exclusive to Turnbull & Asser. The fabrics are woven by mills in Bergamo, Italy, owned by the Albini Group, which, two decades ago, bought the English mills that previously supplied the materials.

The Albini Group inherited the brand’s design archive, meaning customers buying bespoke shirts have more than two thousand materials and cloth patterns to choose from. Turnbull & Asser’s four standard volumes of fabric are Sea Island cotton, woven cotton, exclusive poplin, and classic poplin. While the classic styles never change, the company’s product-development team collaborates with the Albini Group to refresh its collection, especially when it comes to the vibrant checked and striped shirts it is renowned for making. Bespoke shirts currently retail in the U.S. for between $405 and $595.

So how, exactly, is a Turnbull & Asser custom shirt created? The process begins with the customer visiting the store to be measured. Then he chooses the material and style. Special attention is paid to idiosyncrasies in the shoulder, torso, and back. The customer’s measurement pattern is then traced and entered into a computer-aided design (CAD) system. “The CAD system ensures more than a modicum of consistency, and it utilizes the fabric efficiently and more accurately, so there’s the least amount of wastage,” says Gillotte.

The patterns are pressed on a plastic worktable with copper wires underneath the surface, and a mouse is run over them, clicking every corner and edge of the pattern. The printout is taken to cutters on the Quedgeley factory floor. Each shirt is tailored in line with the customer’s specific measurements. The cutting is done by hand, using a handsaw and knife, with pencil marks highlighting any discrepancies in sleeve and collar size.

Once the cutting process is complete, the shirt moves to the sewing room. Turnbull & Asser’s bespoke shirts are sewn by a single person, who brings together the collars, cuffs, backs, fronts, and sleeves. “Every step of the production process is hands-on, with an operator working on a different part of the shirt,” says Gillotte. “You wouldn’t want a shirt that is computer-generated.”

A Turnbull & Asser shirt is made from thirty-three individual pieces (excluding the seven buttons on a double-cuff shirt, or the thirteen buttons on a barrel-cuff shirt). The collars and cuffs are preshrunk and pre-stretched to avoid unsightly lines or folds.

Turnbull & Asser’s creation of the side seam illustrates its intricate design process. Four layers of cotton are sewn together with three lines of sewing, all within three-sixteenths of an inch. All stitching is single needle and executed at eighteen to twenty stitches per inch. The seam is joined at the tail of the shirt by a hexagonal white poplin gusset to reinforce the garment, a Turnbull & Asser innovation that has been imitated by the competition. According to Gillotte, “The advantage of our machine-sewn shirt is the strength of the seam.”

Buttons are reinforced onto the shirt by a special fusing process, heating elasticized cotton to the thread, removing the need to supply spares. The finishing department enforces a rigorous quality-check process, inspecting each shirt six times, to ensure the measurements are precise and all ends and threads have been removed. The shirt is then pressed, wrapped in paper, bagged, and sent, via FedEx, to the customer. The process, from measurement to delivery, takes four weeks in the U.S. Turnbull & Asser’s New York store sold 5,700 shirts last year, the London shop in excess of 7,000.

Customers who change their mind about sleeve design or the number of buttons they want are easily able to get their revisions incorporated. The company is known for its customer service. English writer Simon Mills once returned a tie he had been given to T&A’s London store: “They looked at it and said, ‘We’re very happy to exchange this tie, sir, but you should know we haven’t stocked this particular design for thirty years!’ ”

The company’s ethos of enduring quality means that when Royal Highness Prince George Alexander Louis of Cambridge comes of age, he is likely to do so in a Turnbull & Asser dress shirt.