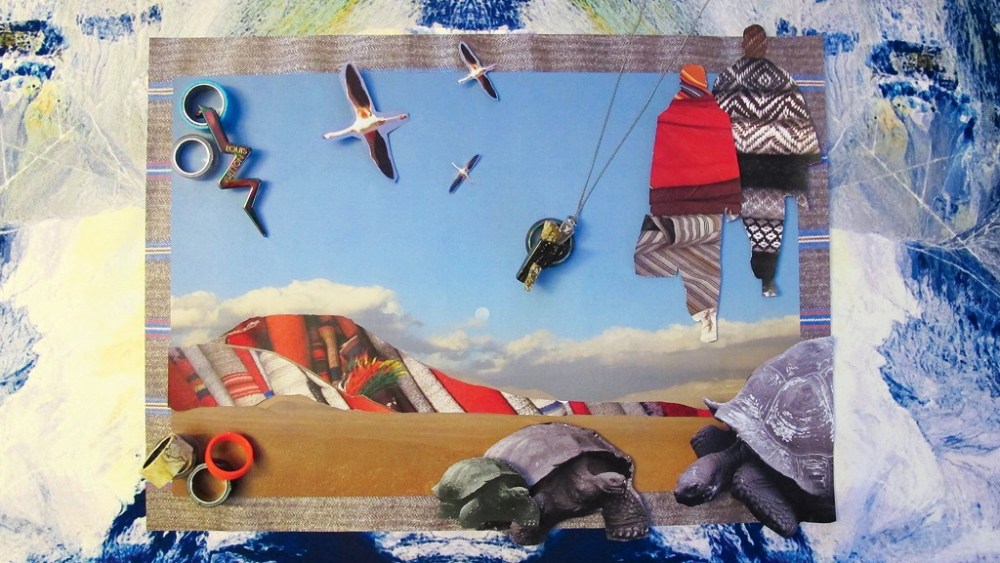 Kim Jones took his first trip —from his home city of London to Ecuador—when he was 3 months old. By age 4, he had been all over Africa with his family, staring up in wonder at elephants.

Today, as Louis Vuitton’s men’s studio and style director, he is still hungry for new experiences. “My specialty,” he says of his penchant for travel. “For me, the world is such a wonderful place. I want to see as much of it as  possible before I die.”

Jones, 35, often travels in search of rare wildlife and is a discreet supporter of multiple conservation charities. His exploits have always fed his fashions, making him a perfect match for a brand that was founded 160 years ago as a maker of trunks for explorers, artists, writers, and heads of state.

For his Fall collection, the designer studied NASA maps of South America’s Atacama Desert  before parachuting in to meet with vicuña farmers.  Jones discussed his travels—to more than one hundred countries and counting—in his Paris office at Vuitton.

M: It sounds like your childhood primed you for a life of adventure.
Kim Jones: My first memories are in Africa. You’d be somewhere, and there’d be an elephant, and being a really tiny kid and seeing something that big is just really crazy. I started loving animals and nature and appreciating how big the world was and how different everyone was.

M: Why did your family move around so much?
K.J.: My dad was a hydrogeologist, so he’d do irrigation wells and all these different projects. I had the city lifestyle as well, in London, and we’d be going back and forth, depending on his posts.

M: Do you prefer urban or remote places?
K.J.: I like living in a city, but I have to get away from it. If you’re in  Africa and you’re looking over thousands of kilometers of untouched land and there’s wildlife, it’s that back-to-nature feeling. I appreciate that.

M: Any close scrapes?
K.J.: I’ve been chased by a rhino. I’ve had quite a few scary small-plane things. But nothing in terms of wildlife, because normally we’re with professionals who know about these animals. When I was a kid, I was really bad, because I’d pick up snakes. It was my thing: “Oh, that’s just a small snake. I’m going to pick it up and put it in my coat.” Meanwhile, it’s a spitting-cobra baby, which is just as venomous as an adult!

M: Can you tell us about some of the rare creatures you’ve spotted recently?
K.J.: I did my quest to New Zealand last year because my friend was living out there, and we went to see the kakapo, which is the rarest bird in the world. It’s a flightless ground parrot—the most amazing animal. I loved seeing it.

M: Are there many animal-lovers in your field, or are you pretty much  a lone wolf?
K.J.: They are quite few and far between in the fashion industry, but Lee [Alexander] McQueen was one of them. We’d test each other’s  knowledge on different things. There’s such inspiration from nature, and also from different cultures.

M: Is it true you’ve seen a snow leopard?
K.J.: I didn’t see a snow leopard. I saw the tracks. I’m going with the World Wildlife Foundation to do some capture for radio-collaring. I’m going to Bhutan with them in October. That’s a privilege.

M: Any other great sightings?
K.J.: I went to India on holiday earlier this year and saw a tiger in the wild. In Ethiopia, I saw Simien wolves, which are very rare.  I think there are only four hundred in the world.

M: Is it always about the animals?
K.J.: I went to Easter Island, and it does not really have much wildlife  because everything was destroyed there, but it’s such an incredible,  beautiful place. I went for five days. It’s only nineteen kilometers around, but I honestly could have stayed there two weeks.

M: Are you happy in a tent, or are you more of a five-star-hotel sort?
K.J.: I’m not really a rough-it person. I have to be in comfort. I need  air-conditioning and a comfortable bed. And a bath, if possible. I’m very English like that. I’ve stayed in the middle of the Amazon, where you’re in a square box and mosquito netting, and it’s terrifying. I woke up, and we could hear a big cat walking around our shack. We could hear her breathing. We didn’t know if it was a puma or a jaguar.

M: Are there places you return to many times?
K.J.: Japan. I can’t go enough. I love it so much. I’ve been to Tokyo at least seventy times. Places like Shanghai—I like going there because it’s  evolving so fast. I’ve been to Machu Picchu a few times. I love taking  people to Africa who have never been before. I love seeing how they react. It makes it even more pleasurable.

M: Are you a demanding person to travel with?
K.J.: I like to have a game plan. Then again, ten of us went on holiday last summer to Bali, and we had a long list of things to do. In the end, we did nothing but lie by the pool, which was absolutely lovely.

M: Do you travel light or with stacks of trunks?
K.J.: I have an essential kit. I like to take one suitcase. What I tend to do  is pack for five days, as long as there’s laundry at the hotel.

M: Any favorite airlines or hotels to recommend?
K.J.: I love flying; I hate airports. My favorite airline is probably Singapore Airlines because it’s just really amazing, and, if you have a suite, you’re  completely undisturbed. I love the bullet train in Japan—it’s really smooth and comfortable, and it’s really well-thought-out. I wish the Eurostar would have a look at it. The Aman group of hotels is really fantastic. You can’t beat them. They’re opening up a rain-forest lodge in Gabon, so it’s got the  combination of luxury and wildlife, which is perfect, really.

M: Given Vuitton’s heritage, racking up those air miles must be an asset for you as a designer.
K.J.: Successful men have no choice but to travel nowadays, so making their lives easier is key. It’s a matter of modern living, isn’t it? I really do think of functionality with everything, in terms of the craftsmanship, the fabric, the detailing, especially in bags. I use our spring-summer tote, the Damier cutout, which is the most fantastic airport bag in the world because it’s got a buckle that’s really secure, but it’s easy to open. Your laptop’s out, your liquids are out, and it’s not a stress. It makes that airport experience easier.

M: Is it true you source fabric suppliers and such on your own?
K.J.: I think it’s important to see things on the ground. The idea of trying to find everything from the Internet isn’t feasible when you’re actually making a luxury product. I want to give the customer the best thing, and the best thing is to go out and find it from the source.

M: Does that mean you went to South America to realize the Fall collection?
K.J.: I’ve been there before, and I knew how incredible the textiles were down there, so we did a trip to Cuzco, in Peru, one of the oldest settled Spanish towns. I went to a vicuña farm. They catch them once a year and then just brush their chin hairs. It’s the most insane thing, but it’s superluxurious. They’re very aware of not stressing the animals.

M: Any don’ts when traveling?
K.J.: I’m not into eating mad-crazy food. I like trying new experiences, but I like to know what I’m eating, purely because I don’t want to be ill for the rest of the trip. I always take a medical kit. I’m very practical like that. Touch wood, I’ve only had to use it once.

M: Have you figured out a cure for jet lag?
K.J.: I try to stay awake until normal bedtime. I take Emergen-C sometimes. It’s a matter of just choosing the flight times. When you come back from Asia, it’s normally an early-morning flight, and you get into Europe in the afternoon. I find that a particularly good one. I haven’t found a solution for when you get back to Europe from Los Angeles. That kills me every single time.

M: Do you have a uniform for the plane?
K.J.: I always have a blanket with me. That’s just me being fussy. I have a cashmere-and-silk Vuitton tracksuit that I always put on. I love watching people at airports, and I love watching people on the plane: How many people dress down now to fly? It seems to be really big, especially in first class. It’s interesting that people take it as downtime now, which is quite a nice way to think about it. I always sleep on the plane. I don’t know what it is—it automatically turns me into sleep mode.