The store offers all categories including women's, men's and kids, alongside its new footwear collection.

A men's display at the new Mackage store in SoHo.

Despite being in a global pandemic, Mackage, the Montreal-based luxury outerwear firm, is seeing some silver linings.

The 21-year-old company has opened its fifth store in the last five months, a 3,400-square-foot flagship at 138 Spring Street in New York’s SoHo. This follows a store in Boston, a three-month pop-up at NoHo’s Showfields, which will remain open until Feb. 15, and two outlets in Canada.

Known for their outerwear and cold weather pieces, Mackage offers all categories including women’s, men’s and kids, alongside its new footwear collection, at the SoHo store.

Situated in a  landmark building from 1890, the Mackage store was designed by Canadian interior design studio Burdifilek. It features a variety of wood and stone finishes along with a spiral staircase imported from Italy and the largest lightbox of all Mackage stores with a flipped iceberg image by Alex Cornell that stretches 26 feet by 28 feet across two floors. 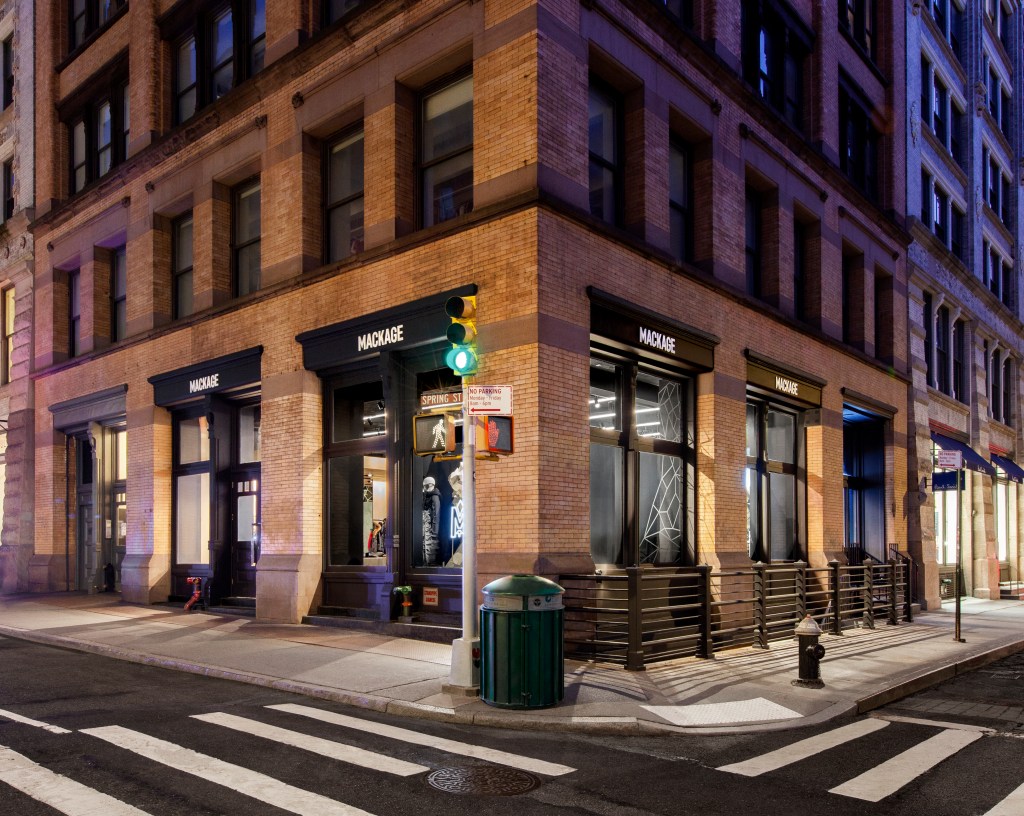 For the store’s opening, Mackage has partnered with a group of New York artists to provide a platform to showcase their work in a rotating series of murals for six weeks on the store’s exterior windows. The first installation highlights pieces by Beau Stanton, who works in a variety of mediums and will show his completed work on the exterior store windows starting Friday.

“Not to be able to physically visit the store is so hard. We worked so long on it. It’s a big milestone for us. The SoHo store represents our new retail concept,” said Dahan.

Mackage opened its first New York store on Mercer Street in SoHo 10 years ago, followed by many others, and that design became outdated. The Mercer Street store is still open but will close when the lease is up at the end of February. The company also has a store at 814 Madison Avenue in New York, which opened in November 2018.

Elfassy said they started negotiating for the Spring Street space in June 2019. They were attracted to the corner location (on Wooster Street) because of its visibility and proximity to such  luxury boutiques as Chanel, Gucci and Celine. He also considers SoHo “the number-one place for shopping in the U.S.”

Construction began last February and the store had been expected to open in September, but was delayed because of COVID-19.

“We wanted to keep the SoHo charm and the flavor of the area that we’re in, and use our concept within those walls. It was really important to bring the real heritage feeling of SoHo into that space,” added Dahan.

The store, which had a soft opening on Jan. 9,  has been doing well so far. “It’s been pretty strong, considering the pandemic and the the fact that people are shopping in-store less, we were pleasantly surprised with the results,” said Dahan.

Elfassy agreed. “The amount of tourism is down, but we’re getting a nice reaction from the local consumer and people who are discovering the brand.”

Discussing growth opportunities for the brand, Elfassy said its footwear collection, which launched in September, has gotten off to a strong start.

“With everything that happened, we still managed to launch footwear. We launched cold weather boots,” said Dahan. “It’s had an amazing reaction. It’s a product you really need right now.” 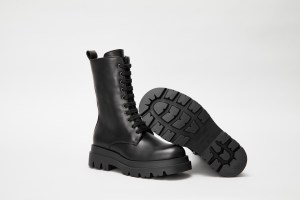 They felt there was a need in the market for a boot that’s breathable, water-repellent, made of supple leather and sheepskin-lined so they are very warm, anti-slip and easy to put on. The boots retail from $550 to $650. There are four women’s styles and one men’s style. The line is being carried in their own retail stores and is being sold to its wholesale partners. 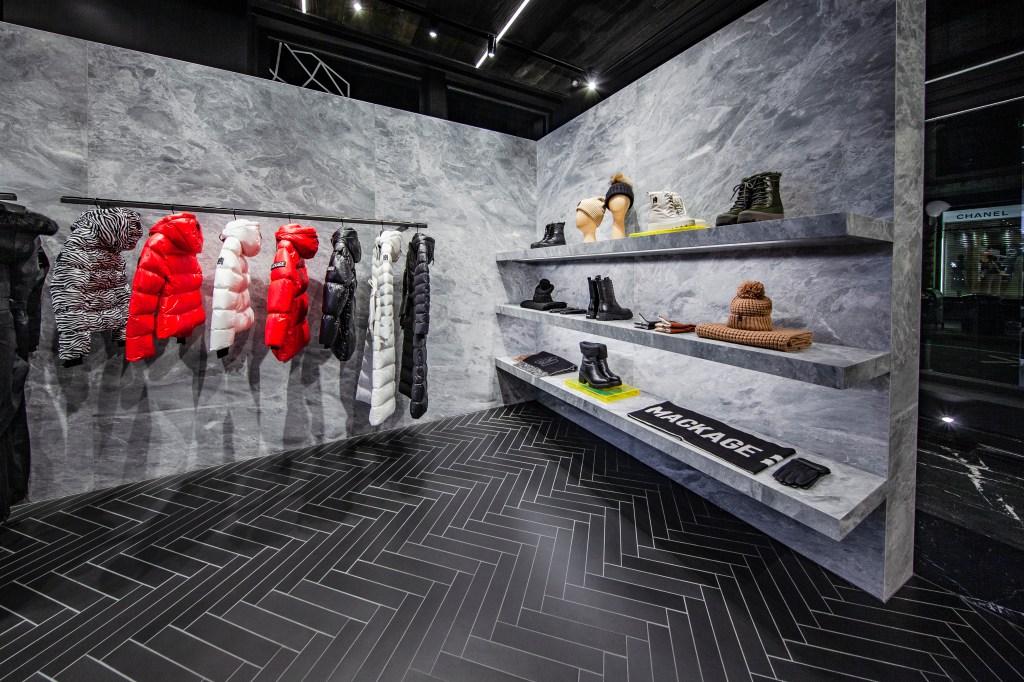 A women’s display at the SoHo Mackage store.  courtesy shot.

Mackage, whose collections include leathers, downs and wools, has built a strong business through wholesale accounts that include, in North America, Saks Fifth Avenue, Neiman Marcus, Holt Renfrew, Bloomingdale’s and Nordstrom.

The company launched a ready-to-wear capsule in its own retail stores last fall and started selling it in its wholesale accounts this spring. The capsule consists of joggers, sweatpants, sweatshirts and fleece, in multiple colors and styles. “It’s even bigger for next fall,” said Dahan. For spring, the rtw retails from $250 to $500, and is being sold in sportswear areas of department stores. Last year, Mackage also launched sustainable masks.

Direct-to-consumer is an important part of the company’s strategy. It has 14 stores globally, consisting of 13 in North America and one in China, along with a pop-up in London.

As for future stores, Mackage is looking at cities like Chicago. “Our first priority is going where coats are needed,” said Elfassy.

At present, fall merchandise is being sold at the new Spring Street store. The store has a spiral staircase to the downstairs, which is men’s, and upstairs features women’s. There are areas in the store that tell different stories, such as the skiwear story. The cash wrap is in black marble and is cut like an iceberg.

Bestsellers so far have been anything black, and the brand’s Lustrous Collection (down puffer jackets that are bold and have exterior sheen), as well as the classic down parkas. The average retail price of outerwear in the store is $820. 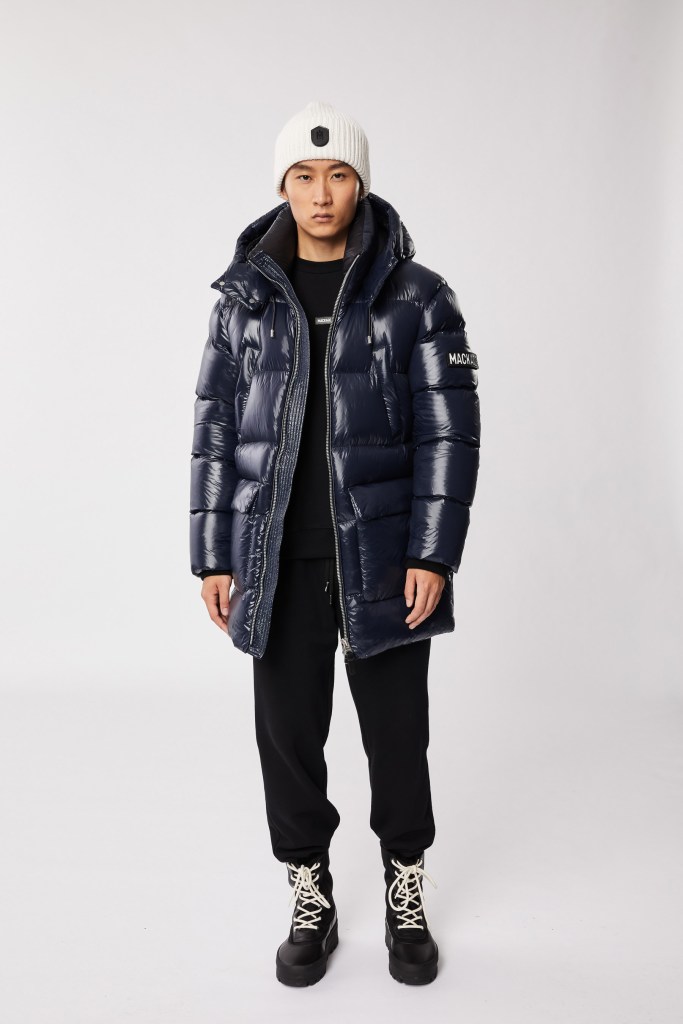 “When people open a Mackage jacket, they’re always surprised by how much technicality there is there. It’s water-repellent, it’s windproof and it’s breathable,” said Elfassy. 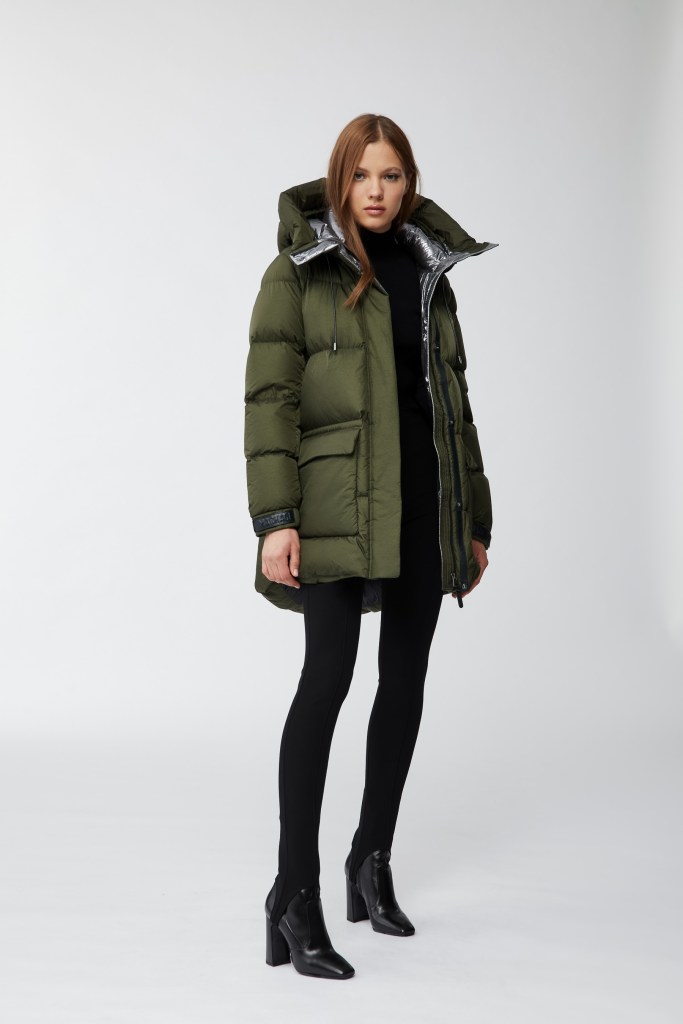 The Maisie down jacket from Mackage in Army green.  courtesy shot.

“We’re very fortunate we’re in a category that’s more essential,” said Dahan. “We’re in a time where people want to spend more time outside. If people have to justify a purchase, it’s more justifiable than another fashion purchase,” she said.

Another big opportunity for Mackage is Asia. The company just had its first season in Japan, which surpassed their expectations. It has a partner in Japan and opened around 17 pop-ups for fall 2020 in malls and concessions. It had 85 percent sell-throughs. For two years, the company has also had a partner in China. There are nine seasonal pop-ups, including one that opened in Wuhan on the first floor of Wuhan International Plaza in early December. “It’s doing very well, we’re really performing in China. Outerwear is really a strong category in Asia,” she said.

Bestsellers have been down, wool and leather jackets.

She attributed the strong sales to Asians not traveling as much and shopping locally. In addition, in 2019 they rebranded the line and evolved their logo, which is featured  on the arm, which they never had before. It used to be on the back of the hood. “For Asia, it was very well received,” said Dahan.

Mackage uses real fur in the hoods, as well as a lot of shearling in collars to keep the warmth.

“The warmth you get from fur you can’t replace it with a synthetic. We do use fur much less than we used to in the past. We are replacing it with shearling and using other components,” said Elfassy.

When Elfassy started the company in 1999, he said people were paying more attention to what they were wearing under their jackets than the jackets themselves. “Our goal was to change the way people think about outerwear. An outerwear piece is an investment. You wear it more than once, and you shouldn’t be compromising,” he said.