Made in the Shades 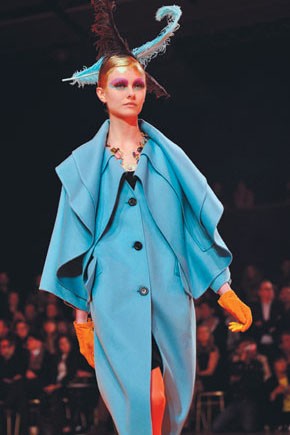 John Galliano: “It’s not the egg rolls, Harry. It’s the last 10 years.” So quipped the put-upon wife to her husband in an old New Yorker cartoon. In the increasingly listless marriage that is this industry’s show system (retailers and press, wife; houses and organizing bodies, Harry), John Galliano caught the brunt of the missus’ frustration. The irritation with which his audience left his show on Friday night had less to do with the hour-plus wait than with the last four weeks. Or is it six weeks, going back to couture? Or the endless treadmill of constantly looking at the next batch of clothes? (Next up, kids: Cruise, kicking off May 12.)

Galliano started out happily, with an invitation that beckoned guests to Xanadu. Though the trek was far enough to really get there, once inside, everyone reveled in the elaborately done venue, set up as an old-time movie set and populated appropriately — writer-director, various actors in costume, stagehands, and the like. But once people settled into their seats for what remained of the wait, the goodwill dissipated.

Typically, you can’t help but get caught up in the fancy of a mega-Galliano production, the vamping girls, the frivolity, the joie de mode, especially when the clothes are strong, and these were delightful. Though they weren’t for the most part new for Galliano, their playfulness, color and wit looked pretty darned fresh this season, and he did work a few novelties into the mix of gentle dresses, girly separates, glamorous furs and great coats. Case in point: a divine big blue sweater coat with crewel embroidery.

Yet, glancing at the crowd throughout the show, no one within sight cracked a smile. By the time it started, the mass adrenaline rush sparked by the set had vanished and people were too exhausted, perhaps even too uninterested, to be engaged by anything short of a transformative performance, which this was not. Thus, Galliano’s considerable effort and execution fell flat.

Luckily, nobody’s bad mood gets shipped to a store. But it should be noted that audience negativity (at least among Americans, who perhaps don’t matter much these days, anyway) is reaching a crisis point. Fashion shows are supposed to create excitement. If retailers and editors don’t get excited about the shows, and don’t even try to fake it anymore, how are they supposed to excite consumers into spending those incredibly shrinking dollars?

Hermès: Hermès on the fringe? In a way, yes. Jean Paul Gaultier used a string theory of sorts in his fall collection for Hermès, fringing and tasselling cashmere wrap skirts, silk-scarf blouses and dresses and other ultraluxe fare, but that’s as out-there as it got. Though Gaultier set his audience up for one of his far-flung exotic romps with an Oriental-rug runway and peculiar soundtrack, it turned out to be a ruse for a très classique Hermès collection. And no complaints here.

From beginning to end, there was no shortage of terrific timeless staples. Cashmere peacoats, check. Sharp smoking jackets and trousers, check. Leathers done in classic trenches, croc-printed suede blazers and handbags galore, check, check, check. Everything was cut just right in fabulous, best-of fabrics and was styled à la chic Parisian, which is to say layered, but not piled up, and topped off with gloves and knitted beanies. Throughout, Gaultier used the house’s scarf prints to spice things up. Done in a paisley print, they added a touch of ritzy bohemia to pleated silk skirts and handkerchief dresses. Meanwhile, swingy Mongolian lamb shearlings took the look a little rock — classic rock, that is.

Chloé: In his first few outings for Chloé, Paulo Melim Andersson broke ties with the label’s charming ingenue ethos in favor of a tough, angsty girl one season and a gentle artsy type the next. Now, Melim Andersson seems to be getting into the groove of things, with a lineup that nodded nicely to Phoebe Philo’s sweet-miss template without losing his edgier stance. The result: This girl is a little bit English countryside and a little bit rock ‘n’ roll. She “belongs to the magpie school of looking good,” the show notes explained.

And, indeed, the collection reflected a certain toss-and-go nonchalance of someone rummaging a little here, a little there and even nicking some threads “from her Kensington nanny.” For instance: the pretty chiffon tea dresses in Seventies-esque garden-floral prints, some worn under boxy mannish blazers for a tomboy counterpoint, or the kicky beaded dresses tossed over a sheer or patterned blouse. That quirky potpourri spirit extended to the embellishments, too. Melim Andersson took a crafts-class approach, with crystals and small pleated wheels artfully tracing everything from tailored vests and jackets to diaphanous dresses, even one coat tricked out with patches of fur. It made for an appealing take on the appliqué work that has become a house standard.