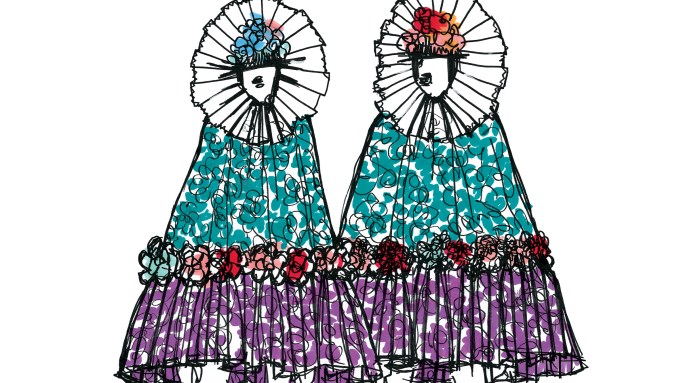 The costume designer Arianne Phillips was in London in late February when she heard through the grapevine about a designer who was just beginning to get people’s attention: Alessandro Michele.

The 42-year-old Roman had just shown two collections in quick succession after his appointment as Gucci creative director and suddenly found himself the toast of the fashion world.

Meanwhile, Phillips, an in-demand costume designer for the movies, a veteran of Tom Ford’s “A Single Man” and an Academy Award nominee for “Walk the Line,” had just started preparing for her biggest project of the year: the months-long, all-consuming head trip known as a Madonna world tour.

In a nice bit of kismet, or a psychic connection, Michele himself was somewhere in Florence working, unprompted, on a gift for Madonna when Phillips reached out to Gucci to contribute costumes to the tour.

“The energy was just out there,” Phillips says.

WWD Archives: The Best of Madonna in the Pages of WWD >>

When Madonna opens her “Rebel Heart” tour on Sept. 9 in Montreal, she will do so in Michele’s Gucci. And Prada and Jeremy Scott’s Moschino and Alexander Wang and Fausto Puglisi. Pop stars “collaborate,” to borrow an overused phrase, with designers all the time, mainly on red-carpet appearances.

But few can command at will, or use as prominently, marquee designers like these quite like the Material Girl, a unique position she’s enjoyed ever since she made a certain Parisian enfant terrible synonymous with a cone bra. More so than her peers, or her wannabes, Madonna has made high fashion an integral part of her music videos and tours, bestowing on designers the full force of her megawatt celebrity. Has anyone else worn Givenchy to the Super Bowl? When she calls, designers listen.

“She opened the door for all the pop girls out there today, many of whom I dress and who do respect her and give her props,” says Scott. “We all owe her a debt of gratitude.”

Plus, haven’t you heard her latest single? “She’s Madonna!” says Alexander Wang. “It goes without explanation, she’s iconic.” Michele adds simply: “I am crazy about her.”

A couple of weeks ago, Phillips was on her way to Nassau Coliseum on Long Island, N.Y., where Madonna is rehearsing, to work on costumes that were still not quite finished. Wang, for instance, was making alterations to his look, a long-sleeve mini in basketball mesh, because of last-minute changes in the production. Gucci had its last fitting a week later.

“For her, the performance comes first. She has to be able to dance and move and feel comfortable in it,” Wang says.

“[Madonna] doesn’t really finalize any of the designs until 100 percent of the choreography is set,” Phillips says. “It’s a real back-and-forth conversation and it’s a brutal process for most fashion designers. You’re hanging in the balance while all the practical aspects are worked out, like the choreography and the quick-changes.”

Not that Phillips sounds concerned. She’s gone through five of these marathons, each one larger than the last — this one has 28 performers; an average of 10 costume changes for 20 dancers, six for the background singers, four for the band and Madonna’s own eight full looks — and she knows it always comes down to the last minute.

By now, she’s been working on the tour on and off since December, when she organized her design team. She didn’t reach out to designers until April, when a working set list and the show’s usual four-act structure began to take shape.

Madonna’s conduit to the industry, Phillips is a longtime insider who can play the boss’ eyes and ears on the street and intuit her wishes. It was her job to design most of the show and then figure out the flourishes, which old collaborators to leave out and which new ones — accessories designers Lynn Ban and the Brit Rachel Freire — to bring into the fold.

“A stylist is like being a yenta. My job is finding out what’s relevant and what’s appropriate for the story Madonna’s trying to tell,” Phillips says.

She took the reins of the first act — a Joan of Arc-inspired section similar to the Mert Alas and Marcus Piggott-lensed cover art of the “Rebel Heart” album — and devised a series of costumes referencing liturgical fabrics and a recent exhibition of samurai armor at the Los Angeles County Museum of Art. Dancing nuns on stripper poles also make an appearance during this act. It wouldn’t be a Madonna show otherwise.

Miuccia Prada, who created original Prada and Miu Miu footwear for previous tours, was asked to design costumes as well this time around for the show’s second section. Her response? Rockabilly meets Tokyo.

“Nothing we do is literal. Everything is a mash-up,” Phillips says.

It’s in the third act, the Latin quarter if you will, that things get really twisted. Puglisi and the Lebanese designer Nicolas Jebran created more of the same matador-inspired looks that appeared in the music video and live performances of single “Living for Love.” But then, there’s the showstopper: Michele.

After finding out about him, Phillips inhaled his first two collections for Gucci: “I was completely blown away. I love his hand. His clothes are lyrical and feminine and they tell stories. I didn’t know him, but I felt there would be this synergy to have them together.” Boy, was there.

“That’s a real highlight,” Phillips says breathlessly. Michele might have been working on his spring show simultaneously, but he had to make time for Madonna: “Now that I have had the chance to see her working, I truly understand why she is so grand!” he says, just as breathlessly.

To end things with a bang, Madonna enlisted Jeremy Scott, fashion’s resident club kid, for the party section. She has worked with Scott intermittently since the early Aughts, but perhaps picking up on his ascendance in the public eye since his appointment at Moschino — not to mention his relationship with Miley Cyrus, et al — she brought him back into her orbit to work recently on several high-profile looks, including ones for her “Bitch I’m Madonna” music video.

“Madonna is often like a director,” he says, comparing her to younger pop starlets. “She has a vision and you get behind her to achieve that vision.”

Scott’s mandate was to come up with an homage to Harlem-flapper-meets-Paris-in-the-Twenties and several weeks after their joint appearance at the Costume Institute gala, he had the look: a blinding finale dress employing thousands of Swarovski crystals because, Scott says, “no showgirl would be complete without crystals.”

Phillips has finished recounting all the costumes and late nights in the run-up to the opening when she arrives on Long Island. Before she goes in, she pauses to savor the spectacle of that Moschino sparkler.

“We don’t need a disco ball,” she says. “We have Madonna in costume.”