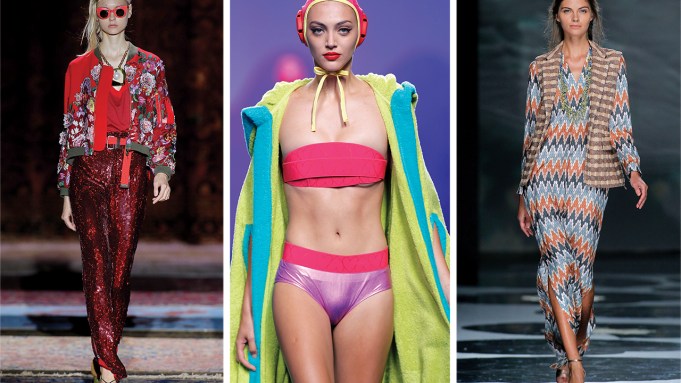 MADRID — Spain has been at a political standstill since last October when Prime Minister Mariano Rajoy failed to claim a majority vote, and now, after two general elections, nothing has changed.

With few exceptions, Spanish fashion is in the same boat as the government — fragmented and stagnant.

At the recent Mercedes-Benz Fashion Week Madrid, held in the fairgrounds here, the players made news more for who didn’t show than for who did. Key dropouts included Roberto Etxeberría, whose stylish men’s wear has long been a staple on the Spanish capital’s runway. The Barcelona-based designer said he doesn’t sell in Spain so he’s going where his markets are – Singapore and Lima, Peru.

Other no-shows were David Delfin, who is battling a serious illness, and Angel Schlesser. His namesake company was recently purchased by El Corte Inglés executive Oscar Areces and the brand showed but, for the first time in 26 years, without the creative input of its founder.

For the second season, veteran participant Roberto Verino bypassed the fashion week. The designer from the northern region of Galicia is a proponent of the instant fashion phenomenon in order to better serve the consumer, he said.

“What difference does the next season mean to customers when he or she is looking to buy now? These are different times that require new ways of doing business. There is a need for immediacy,” Verino said.

With dates once again overlapping with the London shows, overseas buyers were in short supply at fashion week, confirmed a spokeswoman for IFEMA, a self-financed public consortium that organizes Madrid’s fashion events. Provisional figures for the five-day event came in at roughly 50,000 visitors — or a 10 percent drop compared with the previous edition.

According to Francesco Malatesta, an independent fashion consultant and former IFEMA director: “Madrid is much too long. It’s more like a fashion season than a fashion week, which makes it difficult for buyers and customers to get the necessary information from different platforms, ongoing trade events, showrooms and web sites. There is no fashion council here and no precise product definition. Nobody knows what they are going to see, winter or summer, ready-to-wear or couture or what the distribution options are. Tighter organization is a must for the future if we are to capture the attention of international retailers,” he concluded.

Still, there were highlights, including: