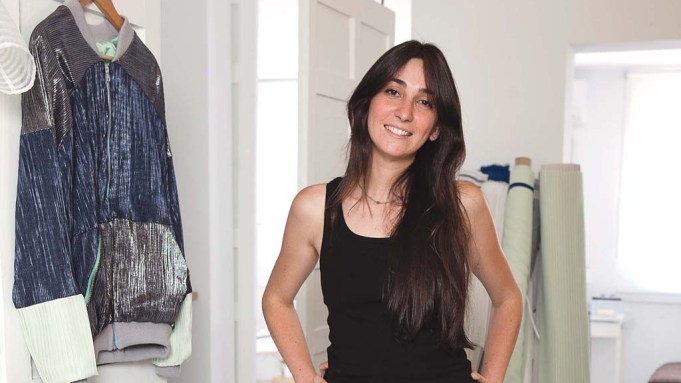 Brands on the rise in Madrid.

“I am not one of those crazy designers,” said Paula de Andrés, the 26-year-old designer of Pol, which she founded in February 2013. “I’ve got my feet on the ground. I have a different product and I’m looking for a serious commercial platform to build a brand and a business. I don’t want to be just a media victim.”

Dresses, which generally run upward of $200, sell “a little” to the domestic market, while an e-commerce site targets potential clients abroad. Her online offer includes dresses, tops and playsuits with prices ranging from $142 to $215. She keeps a little stock, she noted, but generally makes merchandise to order, from sizes XS to XL. Locals can come to her atelier for made-to-measure service.

So far, she has customers in London, Finland and the U.S., where Lady Gaga’s team picked up a snap-closure black maillot swimsuit and a below-the-knee dress with transparencies — both from last spring — for Gaga’s “G.U.Y.” video released in March.

Wearing a tank and knee-skimming black skirt from a local street market and multicolor Nike sneakers, the designer said for September’s Mercedes-Benz Fashion Week Madrid, she’s working up 25 pieces, mainly dresses, a few pants and skirts, jumpsuits and a crisscrossed top with hand-embroidery. One of her highlights will be a baseball jacket with Fortuny-like pleating, a pastel blue zipper and chartreuse lining. Pleats are the season’s leitmotif, along with techie-type fabric and texture mixes, straps, sexy open backs, in a palette of mainly white and gray.

Pol (which is also de Andrés’ nickname) will be showing for a third season in Samsung Ego’s up-and-comers catwalk show, which helps her image, she said.

“Little-known designers are generally ignored in Spain,” she said. “Nobody pays much attention to us, but Ego’s good press is a start.”

After graduating from a three-year fashion course at the Madrid branch of Instituto Europeo di Design, she interned with local designers Antonio Alvarado and Moisés Nieto (who shares a runway show at Madrid Fashion Week), but in general, “Spanish fashion is boring. It’s either Inditex or muy señora [dowdy].”

Current inspirations are Alexander Wang and Alicante, Spain-based designer Juan Vidal, “who is building a business and I admire that.”

De Andrés works out of a diminutive all-white atelier — “I think better with white because nothing gets in the way,” she said — in Madrid’s buzzy Chueca neighborhood with floating antique wooden doors and a pair of blood-orange chairs the only spots of color.

“We are never going to sell big quantities. We are so small, everything we do is a big effort,” she said. Her refined, vintage-cut dresses feature one-of-a-kind, hand-worked fabrics and intricate beading — pearls on tulle, for example — and they sell from 3,000 to 15,000 euros (or about $4,000 to $20,300 at current exchange).

“We’re bringing back the techniques of couture,” she added. “We don’t think about how much time is involved. We just go ahead and do it.”

She sells by appointment only, she has no store of her own. A three-and-a-half-year veteran of Madrid Fashion Week, 75 percent of Helbig’s business is based on made-to-measure artisan pieces and 25 percent is wholesale and bridalwear.

The brand continues to test export waters in the Middle East; Russia, where it’s marketed through a Moscow showroom; Panama, and more recently London, with an online initiative in the pipeline.

Helbig’s commercial director and husband, Chema Pare Monroy, said the family-run business has a team of 12 to 14 artisans and subscribes to a philosophy of step-by-step growth.

“There is more interest now in Spanish fashion because of [new] Queen Letizia,” he said, “but so far we’re still in the conversation stage. We’re looking for small boutique accounts; we don’t want to be mass market.”

Key customers — from the U.S., Mexico, U.K. and Russia — come to Helbig’s Barcelona showroom, he confirmed, which is also the atelier and Teresa’s studio, housed in a 1905 modernist building in Barcelona’s high-luxury and shop-heavy Eixample neighborhood.

During Madrid Fashion Week, she’ll reference the Twenties (“I’m a real romantic and obsessed by detail,” she said during a walk-through) and the Seventies in a 30-piece collection with lots of dresses and shorts, both Helbig mainstays. Pants are also in the mix, along with a summer coat that works as a dress and chiffon party clothes. Exclusive fabrics include the first-time use of raffia and a woven suede. Heavy cream will be a big color with touches of gold, she said.

“The Helbig woman wants to make an impression; she’s seductive and sure of herself with a lot of class,” said the designer, who is petite with shoulder-length hair, nails and toes painted a smoky lilac, wearing skinny jeans and a glittery gold top from the current collection.

Helbig started her fashion career in the Eighties as a window-dresser and in 2008, she participated in her first runway show at Barcelona’s 080 trade event with a hand-crafted flower skirt. In September 2011 and February 2012, she won Madrid Fashion Week’s L’Oréal prize for best collection.

Alvaro Castejón and Arnaud Maillard, co-creative directors of Alvarno, are hopping onto the Madrid runways.

With backgrounds that include Givenchy during Alexander McQueen’s tenure and Fendi (Castejón), and 14 years with Karl Lagerfeld (Maillard), the duo formed their own made-to-measure special-occasion line in 2009 and added ready-to-wear in 2010. They have presented twice yearly in off-runway at locations around Madrid during Mercedes-Benz Fashion Week, but on Sept. 14, the brand officially joins the IFEMA family with a 12:30 p.m. catwalk show at the fairgrounds.

They’re not exactly strangers to the runway, however: Since March 2013, they have held the design reins at Paris-based label Azzaro and shown ready-to-wear and couture on the runway for the house.

“We’re the first designers to have a solo runway show at MBFWM without a trial run,” said Maillard, referring to showing at a shared collective, traditionally a prerequisite to showing under the auspices of MBFWM.

“We see the winds of change at IFEMA,” he said, “and if you want to have a [voice], you have to participate.”

Maillard and Castejón work out of an all-white studio-showroom overlooking the American Embassy on Madrid’s high-profile shopping thoroughfare Calle Serrano. For next spring, Alvarno’s 10th collection, Castejón revealed, “It’s high-optic and very visual, with geometrics in the fabrics and color plays within the pattern, zippers, and a kind of sport-chic, with leather biker jackets, for example.”

It’s a continuation of fall, which featured detachable pieces, trompe l’oeil effects and texture mixes, “with a brighter spirit,” he added. There are coats, dresses, pants, skirts and jackets with signature flash, man-sized jewel trim and embroidery.

The collection uses mainly Italian fabrics, and everything is produced in Spain except the embroidery, which is done in France, Italy and India, depending on the particular complexity and detail.

Alvarno exhibited for the first time at the spring edition of Paris’ Tranoï Femme, picking up new accounts for fall from the U.K., Hong Kong, India and Kuwait. They said they’ll participate again at the end of September.