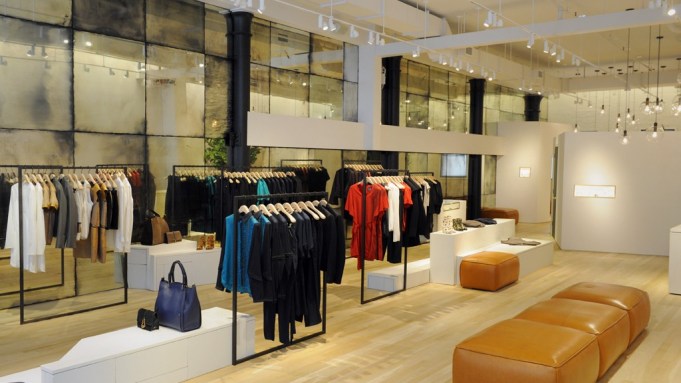 It’s been a busy year for Maiyet, the upstart label that combines artisanal luxury with social awareness. Two months after announcing a major collaboration with star architect David Adjaye on a state-of-the-art factory in Varanasi, India, the label is opening its first freestanding store today at 16 Crosby Street in SoHo. In scouting locations, Maiyet founder and chief executive officer Paul van Zyl and president and creative director Kristy Caylor considered all their options — uptown and downtown — ultimately settling on Crosby Street for its “old sense of New York,” said Caylor. “The area is kind of cool and up-and-coming, and the adjacencies are great with De Vera and Opening Ceremony. It still feels a little bit off the beaten path of SoHo, and we liked that it still had a cool edge to it.”

The 2,500-square-foot sales floor was designed by Cigue, a Paris-based architecture firm founded by six classmates from L’école nationale supérieure d’architecture de Paris La Villette, which has worked with labels such as Céline, Isabel Marant and Yves Saint Laurent. Headed by Cigue’s Hugo Haas, the store aesthetic is bohemian minimalist, with a focus on clean, white space and chic, craftsy touches that reflect the Maiyet ethos. Glass vitrines showcasing fine jewelry are set in white plaster walls; the dressing room doors are finished with gold trim and covered in cashmere; the south wall is done in custom-fit distressed mirrors, and decorative greenery, such as a ficus tree, is used throughout.

Entering the freestanding retail business has come relatively quickly for Maiyet, which launched in spring 2012 with impressive investors, including Wendy Schmidt, Richard Branson and Jochen Zeitz, director of Kering. In May, WWD reported that Kering had been looking at Maiyet as a possible acquisition. Van Zyl declined to comment on that or projected sales figures for the store, but he and Caylor noted that a store has been part of the business plan from the outset, its swift timing a combination of deliberate strategy and positive feedback from the market. Also, van Zyl stressed the importance of establishing a retail concept for potential shops-in-shop and concessions with future wholesale and franchise partners, particularly in Europe and Asia, where Maiyet is actively looking to expand. “The most prestigious department stores that do concessions are more inclined to take you on when they can see what your vision looks like,” said van Zyl, adding that store will not be just a place to sell merchandise. “We will have wine and food events and music and talks and engagement with our artisans. We’re using the store to pioneer a new way of thinking about luxury.”