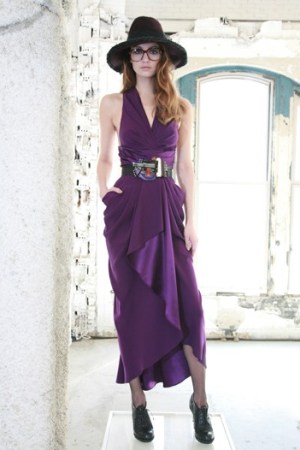 NEW YORK — Catherine Malandrino’s quest for an investor could lead it to become part of the growing contemporary portfolio at Kellwood Co.

Financial sources said that while Malandrino has approached a number of strategic prospective buyers, Kellwood is in the lead. One source described the discussions between the two parties as “deepening.”

Malandrino hired Los Angeles-based Sage LLC in December to find an investor, financial and market sources said. Instead, it now looks like the firm will be bought.

Officials at Sage and Malandrino didn’t respond to requests for comment Tuesday. A Kellwood spokeswoman said, “We can’t comment at this time.”

Sources said Malandrino ran into financial pressures after a poorly timed retail expansion in 2008 that included two boutiques, one in Las Vegas and the other on Melrose Place in Los Angeles. The Las Vegas store has since closed and the Melrose Place site, Catherine Malandrino Maison, remains open as the firm’s new concept store featuring a café, library and outdoor terrace.

The company closed another Los Angeles store, a freestanding unit at Sunset Plaza, a few weeks ago, but not before it had converted it into a temporary outlet site. The Sunset Plaza store was opened before 2008.

The company continues to operate stores in Manhasset, N.Y., on Broome Street in SoHo, on Hudson Street in New York’s Meatpacking District and in Paris. There are Malandrino boutiques around the world, including shops within Intermix and Neiman Marcus in the U.S., Holt Renfrew in Canada and Seibu in Hong Kong.

Malandrino, born in Grenoble, France, worked at Louis Féraud and Emanuel Ungaro before striking out on her own. Her first collection was presented in New York in 1998.

In addition to apparel, Malandrino has an accessories collection that includes footwear and handbags. She launched her first costume jewelry line with the fall/winter 2008 collection.

Kellwood has experience in building brands that have potential for a sizeable retail presence and has demonstrated a particular fondness for the contemporary segment of the business, making it a logical partner for Malandrino.

Its first foray into the contemporary sector was via its acquisition of Vince in September 2006. Kellwood has grown Vince’s volume from $45 million at the time of the transaction to more than $150 million annually as of 2010, in part through retail expansion.

Kramer told WWD last year, “They bought us as an investment and they believe in our strategy,” he said. “Normally, the hold time is five years. They have an enormous amount of capital. We will reach a certain point where we will go public” or sell to a financial or strategic investor.

Having a strong operating platform, as well as a top-notch portfolio of brands under its umbrella, would enhance Kellwood’s valuation, whether Sun Capital chooses to go the initial public offering route or sell to another investor.

Should a deal come to fruition, Kellwood would acquire Catherine Malandrino through financial assistance from Sun Capital. The acquisitions are structured so that Sun provides the funding, but it’s booked on Kellwood’s balance sheet.

In past deals, existing management teams have stayed on as Kellwood employees. The big change for the acquired firm is that it now has access to Kellwood’s core operating expertise, as well as financial support, to grow the brand.

Sources didn’t provide estimates of Malandrino’s volume. Kramer has said that his acquisition landscape covers firms with annual volume between $200 million and $300 million, as well as smaller firms that have strong prospects for growth in the $100 million-plus range. He’s also said he is eyeing firms in the juniors’, women’s and teen-plus categories, in both apparel and accessories.