Malo Updated With Tradition in View

When 6267 duo Tommaso Aquilano and Roberto Rimondi took Malo's creative reins in July 2006, they had carte blanche save for one aspect ??? they had to... 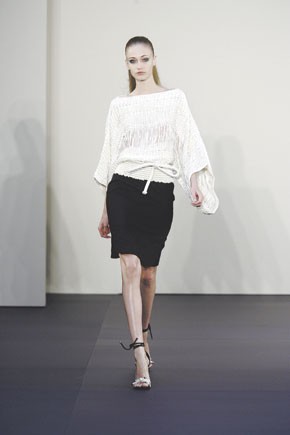 MILAN — When 6267 duo Tommaso Aquilano and Roberto Rimondi took Malo’s creative reins in July 2006, they had carte blanche save for one aspect — they had to respect the brand’s solid knitwear past.

“Malo is known for its fine Italian cashmere and style, a reputation built over decades, which makes it harder for the designers because they have to respect it,” said Vittorio Notarpietro, chief executive of the IT Holding-owned brand. “It’s much harder when you need to move the past forward.”

Not for this pair. Their mission at the brand became to safeguard its DNA while adding a lifestyle appeal via edgy wovens and accessories that can easily be mixed and matched. In the designers’ first show for spring 2007, they showed three pairs of shoes, a number that grew to 20 for next spring.

“We wanted to transform Malo into a lifestyle brand so we needed to treat knitwear differently and broaden the range to other yarns such as finely spun silk besides cashmere for the warmer days,” Aquilano said.

They pumped up the trend volume and revved the knitwear with new proportions, cuts, yarns and textures and tempered the edgier styles with can’t-go-wrong basics.

Silk knits are spun with the same techniques reserved for cashmere.

The spring collection was infused with an Oriental vibe that shone through with kimono-sleeved gossamer knits, embroideries and colored stone applications on sea blue dresses, obis and side-fastened boxy jackets over minidresses with floral motifs. Wholesale prices for basic pieces average $180 but rise to $1,800 for the embellished items.

“We started using 15th-century Florentine wood looms to weave the knitwear and the most interesting aspect is that we asked a crop of young 30-year-olds to use them,” Aquilano said. “The result was very interesting.”

The results are knits that look like fabrics and that have a wholesome feel.

To reach a broader customer base and boost the brand’s sales of $81 million in 2007, Aquilano and Rimondi increased the number of woven items. The formula seems to be paying off as spring 2008 sales advanced 40 percent versus the same season the previous year. Notarpietro expects overall sales to grow by 10 percent next year.

“We hired Tommaso and Roberto to reposition the brand in all its aspects, from merchandising to ad campaigns and from marketing strategies to the look books,” Notarpietro said. “They bought a very valid technical and professional contribution, also thanks to their industrial culture and marketing sensibility.”

Notarpietro noted that in terms of sales, the woven pieces are in a forward throttle because they represent the new element, one that consumers are eager to indulge.

“It’s important that our customers see beyond the knitwear because I don’t want a Malo sweater to be relegated in a corner with Pringle and Ballantyne,” Notarpietro said. “Our objective is to sit at a table with the major department stores to propose a project, a philosophy and a direction.”

Malo is carried in 400 sales points worldwide, including Saks Fifth Avenue and Barneys New York in the U.S., and in the brand’s 30 namesake stores in major cities such as Milan, Paris and New York, and in resorts such as Portofino and Aspen.

For the past three seasons, Malo has shown in New York and will continue to present in the city.

“A good positioning on the U.S. market is the desire of every brand,” Notarpietro said. “Success there is like receiving a diploma and a master’s because it has the most competitive and professional distribution. U.S. retailers are very straightforward, for good or for bad.”

Malo’s new course has piqued the interest of other markets such as Russia and Japan, he said. During the last year, Malo has secured 10 points of sale in Moscow alone and at the end of November, held a major trunk show in the Russian capital.

Malo is also targeting China and pushing Japan, after the brand recently took distribution control back in-house from Itochu. “We have an inexistent presence in the [United Arab] Emirates and will take advantage of the IT Holding showroom that will open in Dubai at the end of the year,” Notarpietro said.

“We don’t want our distribution to grow exponentially, but we want to have more visibility in certain department stores, especially now that our product range is so much wider,” he said.

In general, Notarpietro feels that the seeds have been planted and the benefits will come. “We want to continue striking while the iron is still hot to forge an international, new and trendy brand,” he said.