Shoemaker designed a collection of footwear and other special products for Lane Crawford. 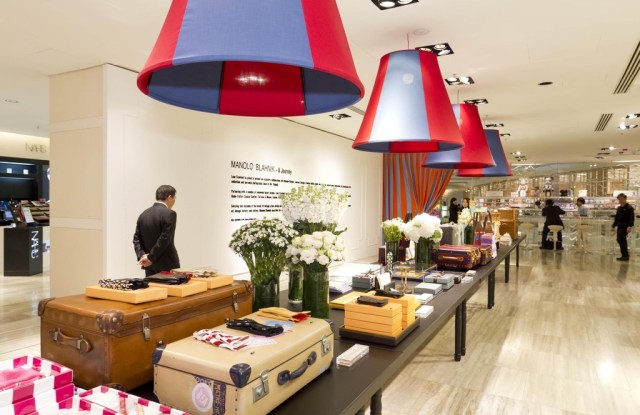 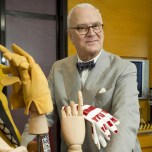 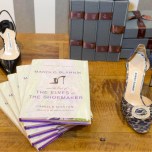 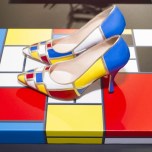 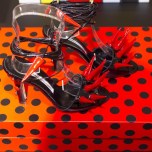 At a cocktail reception honoring him in the Lane Crawford store at IFC Mall, Blahnik was decked out in a lavender suit and purple loafers to match the cover of his new book, a “fairy tale memoir” entitled “Manolo Blahnik and the Tale of the Elves and the Shoemaker.”

Even after hours of signing books, posing for pictures and chatting with the crowd of fashion fans, Blahnik was chatty and energetic. When not posing with Blahnik, the well-heeled crowd chatted, nibbled on passed hors d’ouvres and sipped wine. In the center of the room was a long table displaying Blahnik’s collaboration with Lane Crawford, which included a collection of ten shoes from his archives that have been relaunched for the occasion. The designer also partnered with a number of luxury brands to create limited edition items for the store. Items include striped gloves made by French glove label Causse Gantier, a striped luggage collection with English heritage brand, Globe-Trotter, stationery by New York-based stationer Connor featuring Blahnik’s shoe sketches, Artĕl crystal tumblers etched with his shoe designs and silk scarves by Italian luxury brand Olmetto, also featuring his shoe designs. For special Fortnum & Mason hampers, Blahnik picked out his favorite items such as loose-leaf tea, fruit preserves, and biscuits.

Walls next to the display table showed photos of Blahnik’s friends — people such as Mick Jagger, Audrey Hepburn and Anna Piaggi who he called “one of my most important mentors.”

Blahnik, who spoke with WWD the day before the reception, said the collaboration was “refreshing my image.”

Blahnik was approached by Lane Crawford after his collaboration with Liberty of London, which included a limited edition collection of shoes, prints and holiday items.

“This is exciting for me because I’ve never done these items before. I think it’s the last time I’ll do it,” he said with a laugh.

“Now I’m trying to reinvigorate my image in the sense that people tend to rest on laurels and do the same commercial things. I want to do new and exciting things and have people like them,” he added.

Dapper, erudite and with a playful sense of fun, Blahnik chatted amiably about his whirlwind trip to Hong Kong, his newest collection and upcoming projects, interspersed with observations about Thirties movies, glitterati from the 1970s and other cultural references.

Manolo Blahnik, both the man and his shoes, are no stranger to Asia. The designer has a store in Hong Kong since the mid-Nineties, has a wholesale presence in Japan, a satellite stores in Korea and a presence in Jakarta.

“In the 90s I was here for a short-time but we were so small, I couldn’t produce,” he said. After a few seasons at Lane Crawford in the Nineties, Blahnik is back again for the second season. The designer is also planning to open a second store in Hong Kong early next year, in the upscale Elements mall in west Kowloon.

Though familiar with Hong Kong, Blahnik said mainland China remains something of a mystery to him, referring to himself as “still very Joseph von Sternberg in Shanghai Lily…I have the idea of Anna May Wong,” he said with a chuckle.

“It’s a mystery and I want to keep that kind of mystery. It’s fine to be global but we have to keep these kinds of ideas about the places one goes. Everyone goes everywhere, especially youngsters.  They go to places but they really don’t know where they’re going. China’s got this incredible millennial culture but people go to the, I don’t know, the clubs,” he said.

The designer said he some tried new things with the latest season, describing his spring-summer collection as “a new injection of youth.” These are new things that I’m doing now, that I’m enjoying.”

“I’m trying to do some fantasy things,” he said, picking up a shoe from the spring-summer collection with Matisse-inspired human figures cut into the straps.

“It seems to me kind of horrible that I mention to me that I mention Matisse — because it seems sinful or awful to mention an artist of that caliber put into a shoe, but it’s the truth.”

Coming up, Blahnik has a lot on his plate. He’s designing the spring/summer 2013 collection, working on an exhibit for the Design Museum in London, a pop up store in Moscow, a new store in St. Petersburg, among other things.

“Too much! For my poor body,” he laughed.