The structure has already snagged an architecture award. 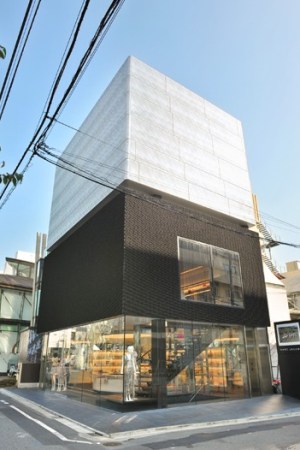 TOKYO — Marc Jacobs’ long-awaited flagship here is about to throw open its doors.

This story first appeared in the December 3, 2010 issue of WWD. Subscribe Today.

The 2,800-square-foot building features three distinct layers: one of glass, a second of rock covered in terra-cotta tiles and a third resembling a lantern that illuminates at night. Stephan Jaklitsch Architects has already snagged an award from the American Institute of Architects for the structure, which is located in the Aoyama district near Prada, Kate Spade and Reed Krakoff. The uppermost layer, a hollow cube of perforated aluminum, is particularly eye-catching and gives the illusion of a third story. Word has it that the building codes only allowed there to be two floors.

The brand feted the new store Thursday night with an opening party. Jacobs and his business partner, Robert Duffy, are not making the trek to Tokyo, but model Rinka, who posed in the buff for a commemorative “Protect the Skin You’re In” T-shirt, made an appearance. Proceeds from the shirt help skin cancer charities. The store opens to the public Saturday.

Jacobs’ Collection line has not had a freestanding store here for more than a year. In April 2009, the house shuttered its former store in a less trafficked part of Aoyama. The ground floor of the new boutique, which sells women’s accessories, features an oval-shaped sales counter reminiscent of the brand’s store in Los Angeles, two aquariums of tropical fish and granite floors. A staircase of East Indian laurel wood leads to the second floor housing women’s apparel. A small basement level stocks men’s apparel and accessories.

Bertrand Stalla-Bourdillon, chairman and chief executive officer of Marc Jacobs International, declined to release an investment figure for the store or sales forecasts but said the company will end the year with consolidated sales growth of 20 percent, thanks to strong growth in Europe, the United States and Asia, including Japan, a saturated market where scores of luxury players are suffering.

“Japan is in a recession for three years now, and I think it’s good to bring a message of confidence to the future of this country,” he said.

The executive said the business in Japan, which represents 8 percent of the house’s total sales, has been performing well since Marc Jacobs ended its partnership with its former franchisee, Look Inc., last year and set up a new joint venture with Sumitomo Corp.

“Twenty years ago you just put out a bag, and it was sold. Today you need to work more,” he said.