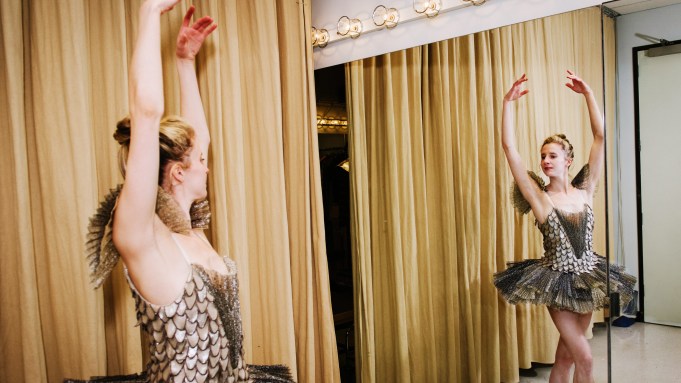 The six-century-old world of ballet has found itself in a precarious place: forced to modernize in the face of newer forms of entertainment — film, television and the Internet among them. But in the process, a new crop of creators, procedures and strategies have emerged with the objective to bring the storied art form into the future.

On Feb. 2, the affable Peck will mount his first narrative work at the David H. Koch Theater, featuring a decidedly large cast of 56. True to Peck form, “The Most Incredible Thing” — inspired by a Hans Christian Andersen tale — aims to again entice a new audience to the theater with a score composed by The National’s Bryce Dessner, and costumes and scenery designed by David Zwirner-represented artist Marcel Dzama.

In the course of its 45-minute run, the work — part of the NYCB winter season’s Artist Series — hopes to stun audiences with a madcap display of agile dance moves, paired with costumes resembling an antiqued, intergalactic take on Dr. Seuss.

As the Andersen plot (first published in 1870) goes, a king charges his people with creating “the most incredible thing” — a competition in which the winner will win the kingdom and his daughter’s hand in marriage. An outpouring of submissions yields the cast’s Creator, who earnestly triumphs with a magical clock. After being decreed winner, the cast’s Destroyer, a sinister character with a club-shaped arm, destroys the clock — an act decreed even more incredible. He wins the princess, albeit temporarily — for the clock’s magic comes back to life and the Creator wins again; sending the message that goodness and art prevail over evil.

“The whole thing is about the rise of art over tyranny or destruction. I had never read this story before and learned about it right at the time that ISIS was destroying Palmyra [in Syria] — I thought ‘Oh, this is so timely,’” said Dzama, between dancers’ wardrobe fittings at NYCB’s in-house costume shop.

While Peck’s choreographic style is inherently aesthetic — drawing exhilarating linear equations with each rapid flick of a dancer’s foot — the neophyte star has charged Dzama with designing the scenery and wardrobe that will frame his steps.

For this, Dzama has married his own signature horror kawaii style (in the vein of Maurice Sendak) and “sullen” color palette with visual inspiration from the Bauhaus ballets of German artist Oskar Schlemmer.

Though Dzama has previously had a hand in various dance costumes (one was featured in Jay-Z’s “Picasso Baby” music video), none — he said — were constructed to sustain the level of athleticism exhibited in Peck’s new production (which will be performed six times throughout winter season).

Enter Marc Happel, New York City Ballet’s director of costumes who was tasked with bringing Dzama’s fanciful tutu visions to life — in a way that thrills audiences while providing the company’s performers a full range of motion. Their collaborative process has been a long one — kicking off last spring with a production schedule that Happel said has been the longest for a single ballet in his many years at the company.

“We wanted the costumes to look like they almost come from another period — like they were created in the Twenties, but with a vision of what the future would be, even farther beyond us,” Happel said of the silvered wardrobe’s overall effect.

Each hour on the Creator’s clock is represented by a miniature ensemble of dancers — three kings, five senses, seven deadly sins, nine muses, et al. The deadly sins and their Dante’s Inferno choreography, in particular, are sure to amuse audiences with flame-colored, hand-painted unitards.

The cast’s Princess character (to be performed by Sterling Hyltin) was engineered to be more tenacious than ballet’s typical female protagonist, and has been given a tutu to match. Her silver tulle bodice and skirt were designed to resemble metal scales — lending an air of grit in an art form that typically values fragility.

The Cuckoo Bird — to be danced by Tiler Peck — will wear a tart tutu of oxblood and gold brocade feathers, cut at a decisively short length to highlight the allegro musicality signature to her footwork.

And the Destroyer (to be danced by Amar Ramasar), in a last-minute change, will wear a sinister take on the Disney outlook of cavalier attire — military sash and cape included. But his character’s club arm means that Ramasar will dance and lift Hyltin in a variety of complicated exchanges, with the use of only one hand. “It’s making me a better [dance] partner,” Ramasar said of the ballet’s trecherous choreography, which Peck himself simply labeled as “meticulously organized.”

Beyond the tutus, bodices and leotards — nearly each costume will be accompanied by a far-from-sugarplum headpiece, wig, or mask; replete with bulbous squinting eyes, second heads and vacant stares — lending them a decidedly Dzama finished touch.

Peck (who also dances as a soloist for the company) said the ballet’s overall effect “has a generational tie to it.”

“For me it’s about creating relevant work, not just new choreography but also commissioning new music and new visual designs from the most talented artists working today. I think there is a responsibility to keep the art form moving forward and that was the intention [with this ballet],” he said of the piece, his 10th choreographic work.

“It’s not going to feel like an old-school classical ballet — it’s going to have my own choreographic style and voice, a new version of what some of these narrative fairy tales are like.”