Margherita Is Back Home!

MILAN — Almost a year after her appointment as creative director of the M Missoni line, Margherita Maccapani Missoni will debut her first collection for the brand on Thursday here.

After a few years spent developing personal projects — including the launch of the Margherita Kids children’s wear collection, as well as collaborations with several labels such as Splendid, luggage firm Away and sun-protection apparel brand Mott50 — the daughter of Missoni president and creative director Angela Missoni has returned to her family’s company with a clear vision for the M Missoni line.

A few days ahead of the show, Maccapani Missoni sat down with WWD at the brand’s showroom during a fitting session to discuss her comeback; the key role that FSI, the fund that last year acquired a 41.2 percent stake in Missoni for 70 million euros, played in her final decision to return, and her strategy for the repositioning of the line.

WWD: It’s been five years since you exited your family’s company, right? You were in charge of the accessories at that time, if I’m not mistaken.

WWD: So why did you decide to go back?

M.M.M.: I’m back because the fund asked me, as soon as they invested into the company. Of course, my mother and my grandmother were so happy, but for me it was really key the fact that people from outside the family wanted me. That really made me say “yes.” It’s very different than being asked from my own family and it makes me feel proud.

WWD: What actually changed with the entrance of the fund in the capital of the company?

M.M.M.: The fund can make investments which before were impossible to make and it was really frustrating. Sometimes when there are no investments you have the feeling that what you do tends to get lost in a way. You cannot do certain things in terms of communication and distribution. The fact that they called me after having appreciated the projects I developed when I was doing things on my own gave me a different credibility and a freedom that before I didn’t have. They called me to take over the creative direction of M Missoni and I said “yes” especially because I understood their intention to completely renovate the line since it was back in-house [and no longer a license with Valentino Fashion Group] and finally there was an interest in repositioning it and making it more different aesthetic-wise from Missoni while keeping it rooted in the company’s DNA.

WWD: Sometimes in the past, reviewing the M Missoni collections, I had the feeling that the brand was kind of offering styles very similar to Missoni, but crafted from materials that made them more affordable.

M.M.M.: Exactly! When there is a license, nobody tends to invest on long-term projects. Everybody looks at short-term results. And because of this, sometimes M Missoni infiltrated the market of Missoni. Now we can finally really pay attention to the two collections since they are under the same ownership. 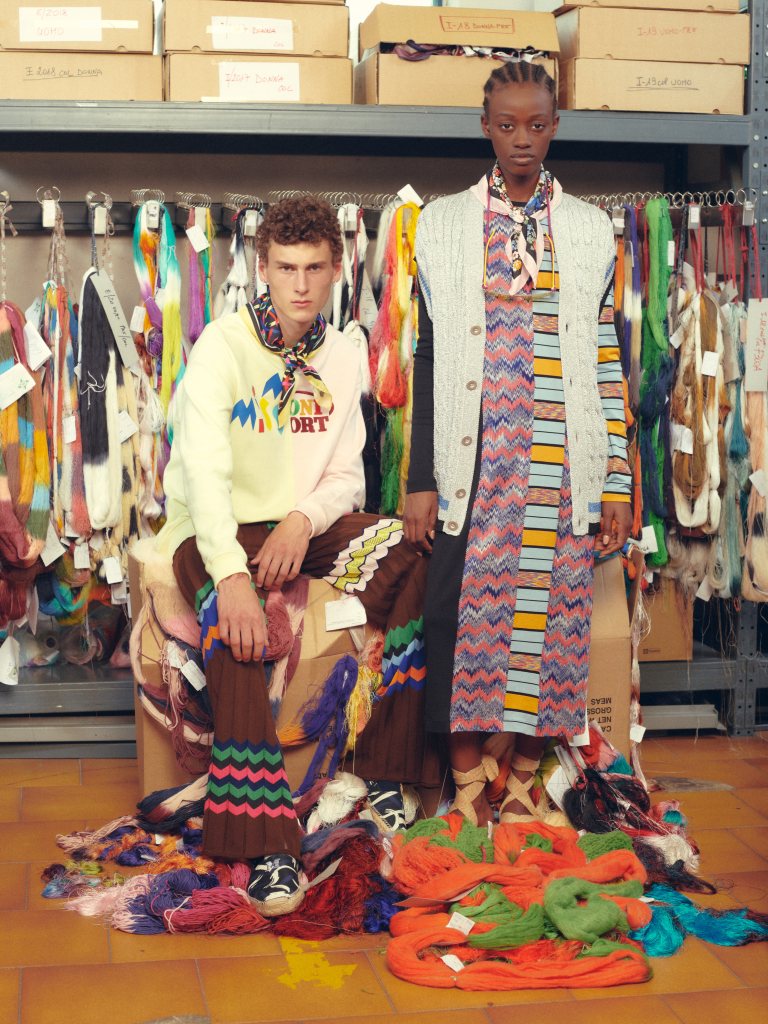 WWD: You decided to organize something quite particular to present your first collection for the M Missoni brand. Why?

M.M.M.: I wanted to unveil the first drop, hitting stores in November, not with a classic look book, but, combined with the second drop which will be on sale from December, with an event because I wanted for my fist communication moment to have not only images, but an experience able to express the value of the brand and what M Missoni actually is.

WWD: What is M Missoni in your vision?

M.M.M.: It’s a tool of the Missoni world to reveal unknown aspects of our past, which maybe are not so iconic, but which can be very relevant for a young audience. And our price range is very different from Missoni. Our entry price is 70 euros for a T-shirt, because we want to make a younger audience discover the brand. However, I would like not to associate M Missoni with a specific age target. And this is among the reasons why I decided to do this special show. Since all about M Missoni redirects to a specific moment of the Missoni brand, when I was searching the archives, I found this picture of musicians who performed on a tramway in the Seventies. So wanting to communicate that this is a daily collection conceived to meet everyday’s needs, I thought that it would have been great to present it on a tramway.

WWD: How is this going to work?

M.M.M.: We booked a tramway which will do a half-hour ride around the city with five stops and at each stop about 12 people dressed in M Missoni will jump on the tramway and will get out at the next stop. And so on. It’s going to be a street casting with people of every age, every gender, because it’s daily fashion and I really would love to give people a moment of joy and fun. We are also organizing some entertainment at Piazza Castello, where the tramway ride starts. Something for the public with performers and a kiosk selling M Missoni merchandise at special prices.

M.M.M.: Our claim is “reuse, remix and respect.” And we refer to the Missoni world. We used dead stocks, ideas from the past and fragments of the company’s past that were forgotten. Always with a great respect for what has been done and for those people who created [the pieces]. How do we approach this process? With lightness, fun and inclusivity, which can definitely be considered the M Missoni core values.

WWD: Is there any message you want to address with this line?

M.M.M.: I want to be very straightforward with M Missoni. I don’t want to give an idea of the project which is different from reality. We are making clothes. By remixing and reusing, we are definitely channeling the issue of appropriation but what has to take center stage here is not a message. We are making clothes which reflect the needs of today’s world, the needs of real people, real bodies. I like to think that this line is a fruit of cross-pollination. A cross-pollination of different needs, the needs of the people who will actually wear it. This is the reason why I decided to do a street casting and with the event to create a dialogue with the public. I think that M Missoni is more about posing questions than answering questions. Always with irony.

WWD: You really did a deep dive into the history of the Missoni brand. Was this emotional?

M.M.M.: Oh, there are so many images, things that touch my heart. For example, this print [geometric motifs on a China blue base] which I took from a silk scarf that Missoni was including in the packaging of the Eighties “Aria” fragrance, or this double layer top which is inspired by a style that my mother did in the Nineties. The collection is really filled with things that are deeply rooted in my DNA.