Belgian designer Martin Margiela is hanging up his scissors, and his lab coat, for good. 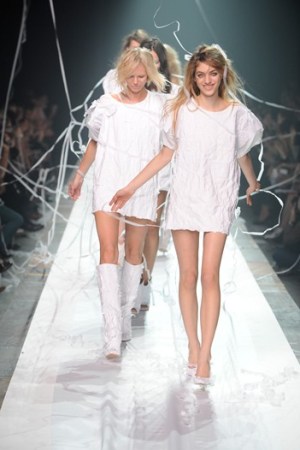 PARIS — Fashion’s mystery man is becoming even more mysterious: Belgian designer Martin Margiela is hanging up his scissors, and his lab coat, for good.

What’s more, the Paris-based fashion house that bears his name confirmed Tuesday that no successor would be named, leaving a team to carry on the legacy of a designer so avant-garde he never showed his face to his fashion-obsessed public.

“We want to stay avant-garde, and provocative, but without a new creative director,” said Giovanni Pungetti, chief executive officer of Maison Martin Margiela. “It’s a challenge. We know this. We will probably make mistakes, but the most important thing is to learn from them.”

Margiela — who introduced cleft-toed boots, deconstructed fashions and all-white stores to the fashion lexicon — issued no statement. Pungetti declined to comment on the reasons for the designer’s exit, characterizing them as personal.

According to sources, Margiela has recently poured creative energies into painting and wished to walk away from the fashion business.

Pungetti described the parting as fully amicable, and stressed that Margiela remains allied with the strategy, as he has since 2002, when Italian industrialist Renzo Rosso’s Only the Brave Srl swept in and bought a majority stake in the house.

Tuesday’s announcement ends speculation about Margiela’s level of design involvement that reached a zenith ahead of his 20th anniversary fashion show in Paris in March, viewed by many as a retirement show. At the time, Pungetti disclosed that Margiela had gradually reduced his day-to-day involvement in the company, working mainly on special projects, such as the “artisanal” collection presented during couture week in Paris, and the house’s first fragrance, under license with beauty giant L’Oréal and due on counters in February.

On Tuesday, Pungetti explained the company granted Margiela several months, at his request, to reflect on his future.

During that time, the company explored its options, too, including the possibility of naming a new creative director. Belgians Raf Simons and Haider Ackermann were among those approached.

“We came to the conclusion that we didn’t want to substitute [Martin], not because he is irreplaceable, but because we are the Maison Martin Margiela,” Pungetti said, seated at a white table at Margiela headquarters with an empty snow globe, an all-white set of Russian dolls and a boot-shaped candle. “He always liked to say to his design team, ‘You are more Margiela than me.’”

Pungetti said Margiela’s “right hand” for the past 19 years would lead the team, which consists of about 25 people and is continually refreshed “with new talent, but no big names, please.”

He held out hope that clarity about Margiela’s exit from the company would encourage critics to “evaluate the collection and not focus on who has designed this.”

While revenues at Margiela catapulted 50 percent in 2007 to 60 million euros, or $82.2 million at average exchange, as the company expanded its product lines and retail network, sales in 2009 will be flat versus 2008, with the company operating at “near breakeven,” Pungetti said.

The company will end the year with 17 freestanding stores and 21 shop-in-shops, with boutiques in Italy, France, the U.K. and Los Angeles running well ahead of last year. No openings are planned for 2010; however, growth vectors for the company include its move into home objects and interior design. This week, Margiela will unveil a suite it decorated at Les Sources de Caudalie “vino therapy” spa near Bordeaux, France.

Pungetti described “very big potential” for the interior design service, noting Margiela is competing for a Paris hotel commission and has fielded requests to do private homes. “The reputation of the Maison as a global design company, not only fashion design, is increasing,” he said.