Maria Cornejo may be in for a long uphill climb with men’s wear, but slow and steady is how her women’s business came to be. 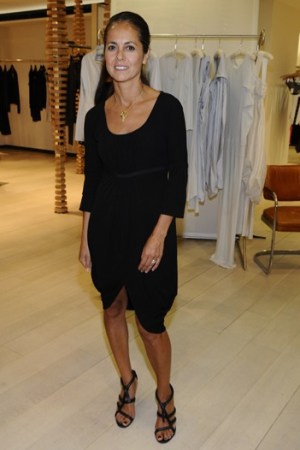 Maria Cornejo may be in for a long uphill climb with men’s wear, but slow and steady is how her women’s business came to be favored by a certain stripe of intellectual and creative professional. The Chilean-born, New York-based designer behind Zero + Maria Cornejo launched a men’s capsule collection for spring at her boutiques and Project No. 8 in New York. She then launched a wholesale collection on her fall runway. If further proof of commitment was needed, she already plans to convert half of her Greenwich Street store into men’s and, soon thereafter, the whole space. She might do a men’s presentation next season. Her coed fall show featured the draping and architecture for which she’s known, rendered in substantial, masculine fabrics.

This story first appeared in the March 25, 2010 issue of WWD. Subscribe Today.

WWD: Men’s seemed to come naturally for you.
Maria Cornejo: My team always laughed at me because I would pick fabrics that look like an old man’s coat. And that’s what I like — black and white, tweedy-looking fabrics. That’s also because I grew up in England. And then there’s also some madness, which this season turned out to be quite African, but it’s really about joy and being Latin and that other extreme.

WWD: What was it like to design two collections for the season?
M.C.: We did the men’s collection first, and the men almost became the beginning inspiration for the women. Because personally, I was wanting things that are more tailored — almost classic things that you want to keep forever, things that are genuine and grounded in quality. We did handmade knitwear made in Bolivia because we wanted things to be rustic, with a personal touch, with really finished interiors, that are not just about a season. I didn’t want men’s to feel expendable or fashionable. For women’s, too — I hate things that are throwaway. I like things that are evolved and have a life. If something is well designed, it should last forever. Of course, it has to look interesting and new every season, but it has to have [continuity]. It’s a vocabulary — you can keep adding pieces and it keeps working together.

WWD: Why do men’s now?
M.C.: As the women’s got established, I felt like it was time to start men’s, and it allowed us to learn a lot about things we didn’t know a lot about, like tailoring. It pushed us to do new things.

WWD: Was it harder than you expected?
M.C.: It was like having your brain sucked through a straw. Especially dealing with male tailors, who, at the best of times, are super regimented. It’s a boys’ club and they’re very fixed in their ways. With the knitwear, it was a bit easier, but the tailoring, yes, it was hard. Torturous.

WWD: How was the retail response?
M.C.: I think there’s still fear of picking up new collections. Also, they want to see at least two seasons to see the continuity and what the story is before they commit, which I understand. So we’ve got a few clients — one in Russia, Harvey Nichols in Hong Kong, Bird in Brooklyn, Project No. 8 and maybe Barneys. But it’s not going to be built overnight. The women’s took a long time to build. It was very word of mouth, and I think men’s is going to be like that. I’m a great believer that Rome wasn’t built in a day. Women’s got to a point when it couldn’t be ignored because people were wearing it. And I think that’s much more valid.

WWD: Who is the customer?
M.C.: My gut instinct tells me he’s pretty similar to the woman. He’s independent thinking. He doesn’t really have to wear a suit to work. They’re architects, artists, actors, writers, editors. Around 35, 40. Probably a bit older than the women. But it’s more attitude than age. We can’t compete with someone who does a fantastic suit like Paul Smith. We have to have our own situation and our own point of view. Maybe you don’t need to wear a suit, but you still want to feel good and wear nice things.

WWD: What do you offer men that’s specific to you?
M.C.: I think cutting and fabrics are my strengths. I’ve worked 26 years, so I’ve done about 65 collections. When I pick fabrics, I’m really fussy, and I can usually go from the first instinct to something final, and that’s the strength of experience. And the fact that I grew up in Europe doesn’t hurt. It’s a different sensibility. The way I feel we can interpret men’s is by using fabrics other people don’t use, or different cuts, different seams. The tailor said, “This only has three pieces. We’re used to seven or eight pieces. This is too few.” I said, “So? Isn’t that good?” When you have clothes that are very minimal, there’s nowhere to hide anything. It has to be done properly.

WWD: What is inspiring you for spring 2011?
M.C.: It’s going to be fine-tuning. I’m really into things that are almost classic but aren’t. They’re going to be our classics. I’m trying to edit and pare down. Luxury for me is time, silence, editing, genuine, handmade. That’s going to inspire me. That’s my idea of what luxury is.

WWD: What are you reading and watching?
M.C.: I’m reading the Patti Smith book about her and Robert Mapplethorpe. I’ve had a really hard time reading recently, except when I’m on holiday, but she’s an amazing writer. It’s really interesting, the relationship of two people I admire. We’re catching up on the Oscar films. But more than anything, I’ve been into emptying my head. I was just in Paris and it was the first time I didn’t run around to every exhibition. I wasn’t in the mood. In a way, I’d rather not look at anything.

WWD: How is your family in Chile after the earthquake?
M.C.: Thankfully, everybody’s physically OK. There’s been some destruction to living quarters and stuff, but they’re fine. My daughter organized a fund-raiser and asked me and Narciso [Rodriguez] and Mickey Boardman to cohost. She wants to work in a not-for-profit and she pulled this together in two seconds.