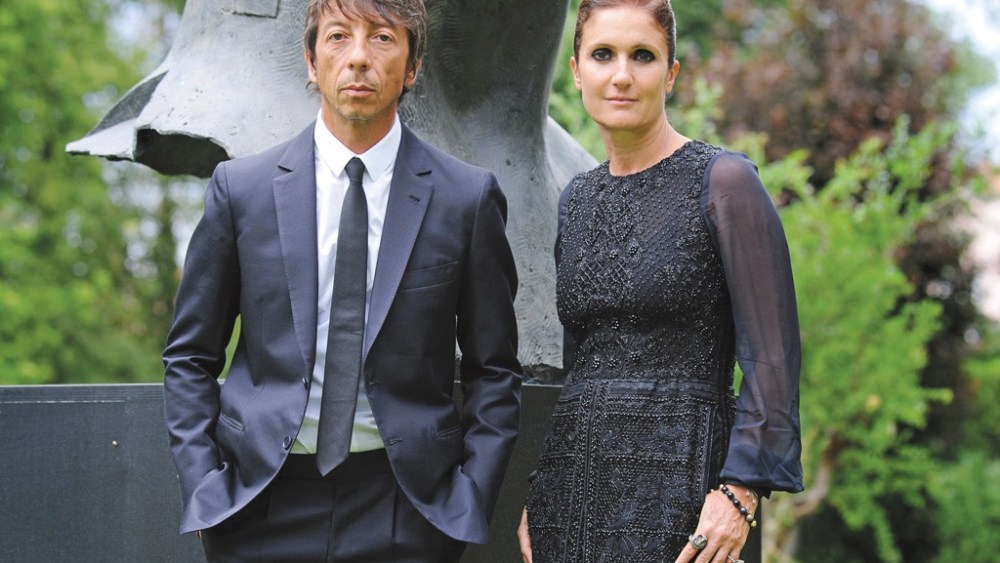 Despite their strong connection with the city of Rome, it was only fitting that WWD’s interview with Valentino’s creative directors took place during the Venice Film Festival and the city’s Architecture Biennale exhibition.

While more press shy and reserved than house founder Valentino Garavani, Maria Grazia Chiuri and Pierpaolo Piccioli continue to dress Hollywood A-listers — many of whom walk the red carpet at the Venice Lido — and count the Architecture Biennale’s president, David Chipperfield, among their friends. Their conversation is peppered with references to Chipperfield, who designed their new — and first — store concept. In particular, they often cite the title the architect chose for the Biennale: “Common Ground.”

“Different worlds are our inspiration, not only fashion, but art and cinema, the spirit of the times,” said Chiuri, looking comfortable and at ease, wearing a blue blouse, jeans and dainty sandals, relaxing poolside at the Hotel Cipriani. “Common ground makes us think about the foundations of the Made in Italy [movement].”

“Our collections have a cinematographic aspect, a vision of a tale, and in Venice, we see the meeting of several different arts. We ourselves don’t work on a single project, but on an integration of different elements,” added Piccioli, in a white shirt and slim-fitting brown pants. “We are well disposed toward this role of an architect at the service of a principal. It’s the same as in fashion, which needs a consignor.”

Chiuri and Piccioli know about working for a commissioner. After 10 years at Fendi, where the pair met and were credited with the invention of the Baguette bag, Garavani personally wooed them to develop accessories based on his briefings for each season. They were named creative directors of accessories when Alessandra Facchinetti was assigned the same title for ready-to-wear after Garavani retired in 2008, and then succeeded her in rtw in October that year.

The company is now in transition again, under a new owner — Qatar-based Mayhoola for Investments — but they appear unfazed and forward-looking.

“We are used to changes and they stimulate us,” said Chiuri. “We put ourselves on the line, and this is a very positive evolution. There is no stress. We are pleased that the company was sold because of the work that had been done. One of the goals [of former owner Permira] was to revamp the brand so that it would be appealing [to a new buyer].”

“The goal now is to grow the company with a precise vision and business model, with an eye on the market. Valentino, as an Italian brand, can be like Chanel in France,” added Piccioli.

The designing duo — whose unity of intent, friendship and ease with each other is palpable — has been credited with rejuvenating the brand without overturning or uprooting it, drawing in new customers with feminine and romantic, yet also contemporary, designs.

Keeping elements of the past while maintaining and integrating them with more personal ones is also common ground with Chipperfield, according to Chiuri.

Chipperfield said that when he started talking with the designers about the store project three years ago, they “took heritage into account but were thinking forward.”

“It’s difficult to do something new in retail. Everything has been tried,” the architect said. “We wanted to make a house, escape the feeling of a showroom, design a palazzo in the spirit of Valentino and bring architecture forward. We wanted to give a sense of permanence, which is counterintuitive and different because it responds more to architectural solidity rather than the ease of construction and notion of change” usually associated with fashion and retail.

Chipperfield added he was inspired by Italy’s “great design period” from the Fifties and Sixties, and architects such as Gio Ponti and Franco Albini. “The use of carbon fiber is an homage to that,” he said.

Piccioli noted, “It’s about memory, not nostalgia, so it’s already selective — and a foundation for the future, a source of inspiration. Everyone is aware of the past and chooses one particular memory.”

Chiuri and Piccioli are family friends as well as colleagues. Each is married — Piccioli has three children and Chiuri has two.

The designers have elected to highlight Valentino’s couture, which, they claim was “not so visible” in its influence on the ready-to-wear and other categories in the past.

They describe couture as “multifaceted,” expressing knowledge, quality, execution, and service, and extend its superior elements to other product categories, and even to the store, meaning “care, and intimacy and personalization of timeless luxury,” said Piccioli.

“Couture is synonymous with uniqueness,” he said. “Those who know the product well appreciate it the most.”

Chiuri said they were like “pioneers” when they started talking about couture, while “people would talk about a logo, which is a synthesis and does not have those cultural layers, the workmanship and the intrinsic quality [of couture]. For the past 10 years, fashion seemed contained in a logo. A logo can be luxury, but luxury has been abused as a term for the past 10 years. It’s a relative concept. Couture is more than luxury.”

However, as part of the rejuvenation process, “it was important to understand that women have changed. The brand referred to a classic and validated beauty, according to an aesthetic scheme,” Chiuri explained. “We started talking to women that don’t represent one single beauty model, but one that is multifaceted and more personal, no longer one single aesthetic look.”

The designer pointed to actresses Laetitia Casta and Kasia Smutniak, who hosted the Venice Film Festival and wore Valentino on several occasions in the city. “They are so different, but have strong personalities, and they are independent. We like multifaceted women.”

To mark the store opening and Valentino’s 50th anniversary this year, the designers created a capsule collection of capes, foulards and totes that resurrect historic prints from the house.

“These are simply prints that we liked but that others don’t really know,” said Chiuri, adding that they were less inspired by specific archival frocks and more by the iconic images taken, for example, by Franco Rubartelli of Veruschka wearing a Sixties-era creation. “There was a certain subversive nonchalance for the times that seems effortless today,” said Piccioli.

Piccioli said Garavani in the Sixties was “a great innovator,” and the women he dressed in those years, such as Jackie Kennedy — “more individual and three-dimensional” — are closer to him and Chiuri, rather than the “more bourgeois Valentino women” from the Eighties.

Chiuri and Piccioli have only words of praise for Garavani, whose story they clearly enjoy and appreciate, and who also has always supported them.

“I always admired his rigor and firmness,” said Chiuri. “He never had a doubt, and that is his strength.”
Piccioli pointed to Garavani’s “ability to dream and make others dream, whatever happens. He’s remained untouchable and unfazed through any phase.”

Piccioli underscored that neither he nor Chiuri “ever wanted to superimpose [their] face onto his.” Their ambition was to tell their stories, he said.

“Designs are simply born from the instinct of individuals. Our biggest successes were not expected. If there were a cocktail or a formula, everyone could be successful.”

Chiuri said they would like  for “each single piece to be more visible and iconic, evocative of a reference world. The same as with Tiffany’s signature blue shopping bag or the [Apple] icon on the desktop. We would like to maintain the connection [Garavani] had and increase it. Valentino evokes a dream, and fashion must be a dream. That’s its motor.”