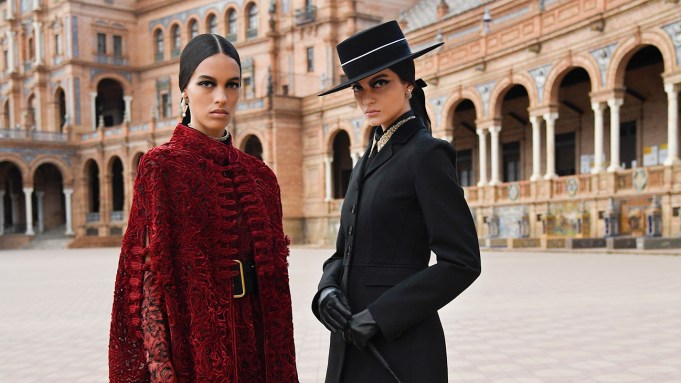 SEVILLE, Spain — For Maria Grazia Chiuri, Dior’s annual cruise show is a unique opportunity to bring together specialized workshops from her chosen destination to work on items that highlight unique and potentially endangered craftsmanship.

In Seville, where the artistic director of women’s wear will present her resort collection on Thursday evening, she found plenty to choose from, ranging from Andalucian leather artisans who are experts in riding equipment, to metalworking and embroidery workshops that usually specialize in religious ceremonial objects.

It all makes for a shared moment that she described as different from any other show on the fashion calendar.

“Fashion is a community endeavor. It’s like we’re celebrating all the work that we made together. The atmosphere in cruise is very strong, because there are all the artisans that collaborate with us at the show,” she said during a preview on Wednesday.

“I feel so strongly the energy of all the artisans, all of the artists that worked with me,” she added. “The level of involvement is completely different, especially with people that don’t have so many opportunities to show their skills, their talent and their creativity.”

Among those taking their first steps into high fashion is Orfebreria Ramos, a traditional metalworking workshop that touts some jewelry on its website, but mostly specializes in producing objects such as crowns for religious statues, and restoring church altars.

It has developed a line of jewelry for Dior on the theme of the rose, as a tribute to founder Christian Dior, who was famously fond of the flower. “It’s the first time that they work for a maison. The owner was super happy because it can give him also a new vision of his work,” Chiuri said.

Similarly, the Jesús Rosado atelier, which only works with gold and silver yarns, habitually embroiders the fabrics used to dress the Madonnas in religious processions or worn for liturgical rites.

For Dior’s 2023 resort collection, it has embellished the brand’s signature Bar jacket and Lady Dior handbag with three-dimensional embroidery inspired by bas-relief sculptures. Chiuri was so impressed, she wants to produce more pieces.

“I want to come back because I would like also to continue the collaboration for haute couture pieces, because they have a really incredible manuality and also artistic taste,” she enthused.

Then there are the items traditionally associated with the women of Seville, a city famous for its flamenco dancing and Mudéjar-style architecture, such as the Alcázar, where the French fashion house planned to host a welcome dinner on Wednesday.

The historic Abanicos Carbonell workshop, based in Valencia, created fans made of lace, while the María José Espinar atelier, where three generations of women work on the production of Manila shawls, developed a series of traditionally embroidered fringed shawls with signature Dior details.

From the equestrian wardrobe — and mood board images of Jackie Kennedy and the Duchess of Alba in traditional Spanish riding garb — the designer pulled two classic hat shapes produced by the Fernández y Roche atelier. One is made of felt and the other of straw, like the special-edition wide-brimmed hat that guests found in their rooms on arrival in Seville.

Javier Menacho Guisado applied his leather embroidery methods to the Dior Saddle bag, while Daniel López-Obrero Carmona collaborated with Italian artist Pietro Ruffo, who works regularly with Chiuri on her collections, on one-of-a-kind pieces that combine carving and painting techniques in the tradition of the city of Córdoba.

The Spanish artisan’s work was used to decorate a series of bags, and he translated Ruffo’s drawings for the show onto painted leather panels covering a trunk designed to house Andalusian saddles and horse-riding equipment.

“It’s like a couture piece of leather, and it’s super exciting because we can create something really new and unique, and also because I think it can give us the opportunity, but also to them, to improve our knowledge and to use this in a different way,” Chiuri said.

While the trunk won’t be featured in the show, she plans to exhibit several of them in store windows for the launch of the collection, which usually goes on sale during the year-end holiday season.

Chiuri hopes that kind of visibility will act as a beacon for younger generations who might lack the motivation to learn traditional skills.

“In Italy, we’ve lost some of those traditions. Here, there are a lot and they haven’t lost them, so if with this show they understand the potential of this kind of knowledge, probably it makes it more attractive for future generations,” she said.

The show, which coincides with a record-breaking heatwave in southern Spain, is due to take place at 9 p.m. local time on Thursday on the expansive Plaza de España. Built for the Ibero-American Exposition of 1929, it mixes elements of the Baroque Revival, Renaissance Revival and Moorish Revival styles of Spanish architecture.

Shaped like a half-circle, the plaza is surrounded by buildings that today are used mainly by government institutions, and is lined with tiled alcoves, each representing a different province of Spain. The buildings are accessible by four bridges over the moat, which represent the ancient kingdoms of Spain, with a large fountain located in the middle.

Overall, Dior is ramping up its schedule of physical displays. The cruise show will be followed by the summer men’s ready-to-wear collection in Paris on June 24, and the fall haute couture collection on July 4.

Dior Will Present Its Cruise Collection in Spain