Marina Rinaldi marks four decades in business with a capsule designed by Antonio Berardi hitting stores this month and other dedicated designs inspired by the archives.

MILAN — “Marina Rinaldi is fully entitled to represent inclusivity and diversity as the Italian brand has done so for the past 40 years.”

Lynne Webber, managing director of the brand, which is part of the Max Mara Group, speaks in soft tones, but she is firm in asserting Marina Rinaldi’s longtime stance on the occasion of the capsule collection designed by Antonio Berardi to mark the label’s 40th anniversary, which hits stores this month.

“Our communication has evolved as our customers have and, in our first two decades, the focus was accepting diversity. Style is not a size, style is an attitude was our tag line,” Webber said. In time, the shift focused less “on self-love and more onto talking about women. We were precursors,” she said, admitting this trend has been widely picked up now, and is often nothing more than “a token gesture.”

Max Mara’s founder Achille Maramotti, the trailblazing entrepreneur who died in 2005, was a pioneer in many ways, creating a fashion group that promoted ready-to-wear and building a formidable retail network. He was the first to offer luxury fashion for women from size 10 U.S. upward, believing curvy women deserve to dress with elegance and in style, according to fashion trends. The decision to name the brand after his great-grandmother Marina Rinaldi, who ran a high-society atelier in the heart of Italy’s Reggio Emilia, proves just how important he felt the brand was.

Inclusivity and women’s empowerment have always been central to Marina Rinaldi’s strategy, continued Webber, citing collaborations on collections and communications campaigns over the years with the likes of Patricia Arquette and Ashley Graham. “One of our strengths is we are very clear and coherent about what our mission is,” Webber contended.

Precious Lee fronts the latest ad campaign, chosen because “the type of woman she represents is in harmony with our brand values. She has a strong personality, is sexy, sensual and beautiful, and shares our vision of inclusivity. She has added a powerful voice to women’s empowerment,” Webber explained.

Berardi, in his second collaboration with Marina Rinaldi, is only the latest in a series of designers who since 2016 have added their touch to the fundamentals of the brand’s body positivity message with special capsule collections. Others include Tsumori Chisato, Stella Jean, Fausto Puglisi and Roksanda Ilincic.

For the anniversary capsule presented last September in Milan, Berardi, for example, revisited a tuxedo-style trouser suit, adding his own touch with kimono sleeves. A sensual vibe was also apparent in a floaty red dress with a hood draping, revealing the back, which was also a focus on a jacket with a porthole.

To mark the anniversary, Marina Rinaldi is issuing a series of T-shirts embellished with sketches from the archives or previous campaigns and, “focusing on its heritage and enormous expertise built over 40 years,” said Webber, the company has “reinvented iconic and eternal pieces form the past with contemporary details, with a touch of joyfulness to brighten these dark days.” Therefore, coats — a Max Mara group forte — are revisited in leather or in a new color palette, such as a deep forest green or bright blue. 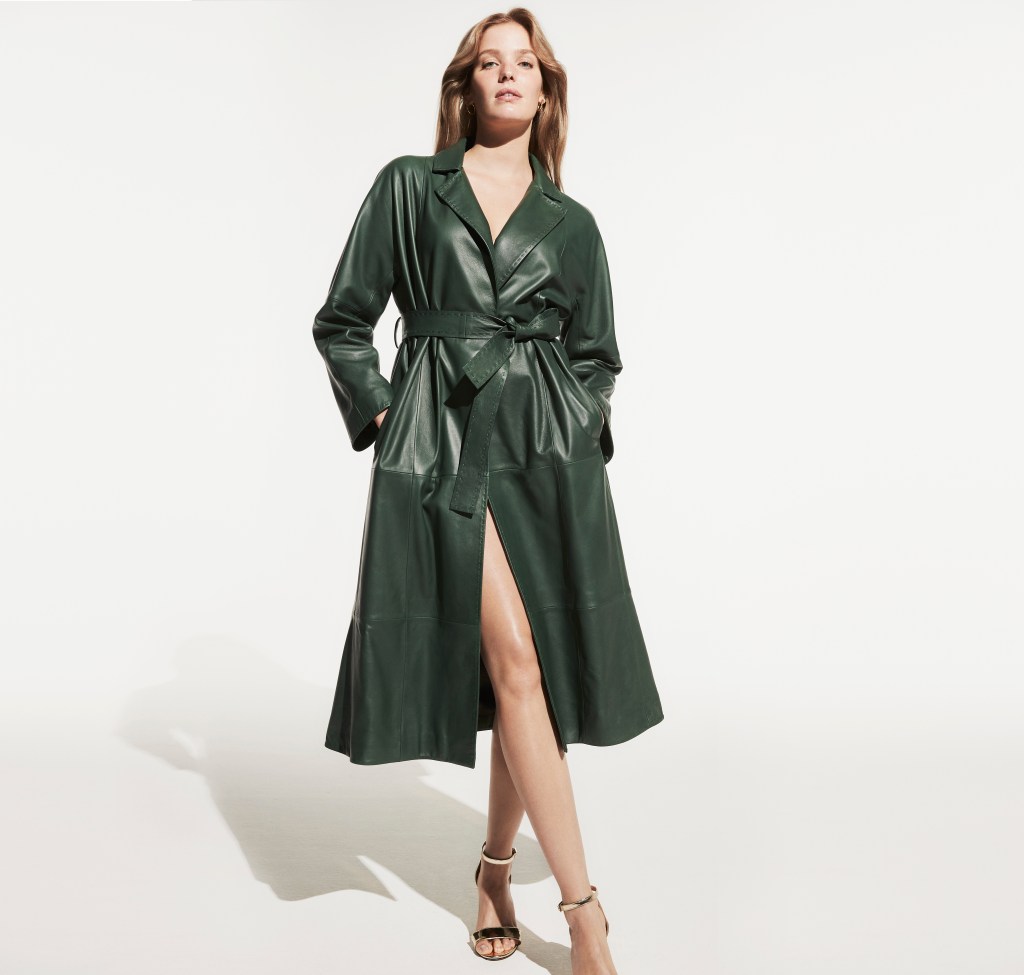 In 2021, the company will focus on consolidating and maintaining its position in its main markets, from Italy and Central Europe to Russia and the Middle East, the executive said. Two new stores will open in Kuwait by the end of the summer, she added.

There are 200 Marina Rinaldi stores in major cities around the world, ranging from Milan, Paris, London and Moscow, to New York, Los Angeles, Dubai and Beijing. 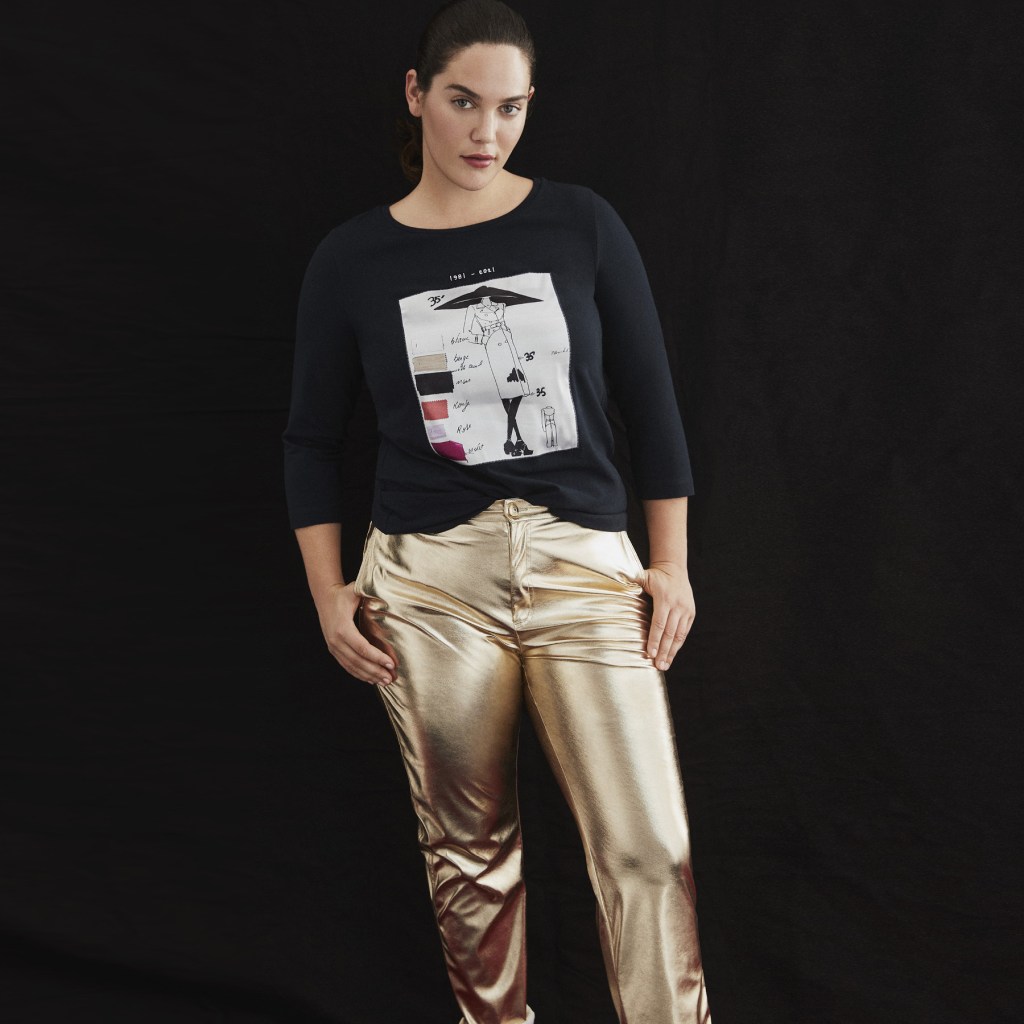 Webber said the company, while noting “very strong growth” in its online channel and in particular a 20 percent increase in online sales in Italy and Europe propelled by the lockdowns last year, continues to focus on its store network, where it promotes tailoring services to customers.

“We have been maintaining the relationship with our customers [also through the pandemic] through remote styling sessions and webinars,” said Webber, adding that its own online channel helps the company gain feedback from customers and “firsthand information.”

The company reported sales of 132 million euros in 2019, the latest figure available.

The brand has expanded with the Voyage collection, a line of functional and comfortable clothes in precious and natural fibers, to travel in style; Marina Sport, a young casual line that includes denim and technical stretch textiles proposals, and a range of accessories, from shoes to bags and scarves.