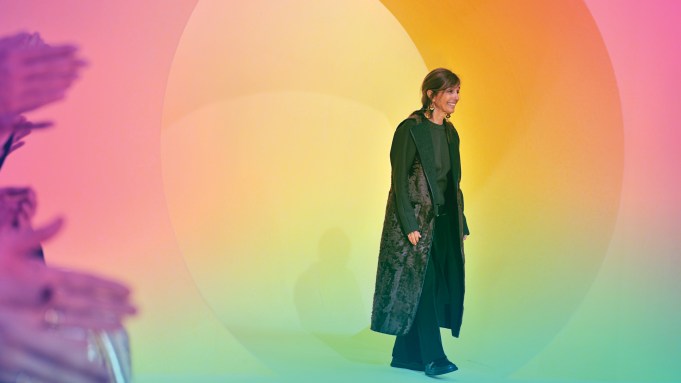 Consuelo Castiglioni marches to the beat of her own drum — one that she has mastered for more than 20 years for her Marni line. Just as the revolving door of designers at other brands continues to spin around her and the industry grapples with the notion of see-now-buy-now collections, Castiglioni’s fashion epitomizes the seasonless trend many of her peers are beginning to embrace.

“Either you love or you hate Marni. Those that first approach it always loyally come back, perhaps because there are no seasons, you don’t throw pieces away, you keep them and wear them again,” the designer explained in her soft-spoken way as she tried to explain the resilience of the brand.

Castiglioni is wearing a white blouse from her fall 2015 collection over wool gabardine, wide-leg pants in a hazelnut hue, and her staple “fussbett” [“footrest”] shoes, a term that refers to the practical sandals she loves to design — and wear. With a self-effacing grin, she said she still marvels whenever she sees anyone wearing one of her designs, and timidly confessed to a frisson of pleasure and pride.

Much has been said of the designer’s reserve, as interviews are few. Flanked by her daughter, Carolina, and her husband, Gianni, seated on a green Gio Ponti velvet armchair, in their beautiful and warmly inviting apartment in central Milan, the designer opened up about her fashion and her family, her passion for art, theater and traveling.

Two colorful Takashi Murakami artworks — gifts from her Japanese artist friend — stand on an alpaca rug designed by Castiglioni. The apartment is colorful, lived-in, with furniture that has a Fifties and Sixties mood — sometimes vintage, from flea markets including London’s Camden Town — and peppered with paintings by artists such as Alberto Burri and Ellsworth Kelly. The spacious living room overlooks one of Milan’s so-called “secret gardens” hidden behind the austere facades of the city’s stately buildings, its windows open on a balmy spring day. Photos by another artist friend, Cindy Sherman, are displayed on a dark library, near a large vase.

Decorating the apartment was “instinctive,” said Castiglioni — the same adjective she uses to describe her fashion. “I don’t sit down and map out a collection.”

To wit, asked to go over images of her fall runway show, she pointed to the first look out: a white blouse with puffed sleeves under a long brown cape with the front cropped above the waist, over forest-green ski pants with a wide waistband and big, high-contrast buttons. Castiglioni explained that the collection evolved from that one design. “The starting point was the volume, the materials and the contrasts, we wanted to do something different, with these sleeves, but with this severe silhouette there is a new romanticism,” noted Castiglioni, conceding that viewers also made references to the Renaissance. She carefully described each look with a few words, at times even caressing the photos as if to feel the fabrics. To be sure, her predilection for exclusive materials is palpable. “We do a lot of research on fabrics — it’s very thorough — and on finishings, too.”

She remarked on the bows, which she sees as “the more feminine touches,” and the capes. “I’ve always liked them, and these are more particular, perhaps. With the buttons on the shoulder, they look more modern.”

The prints in the lineup were based on the American art scene in the Fifties, including one that “many saw as harlequin.” Asked if she views this description as incorrect, the designer shrugged, “I’m used to it now.” At one point, even she struggled to define one of the prints, admitting to “different interpretations,” almost inviting a personal take — à la Rorschach test.

In its review, WWD called the collection “masterful” and “incredibly chic,” and retailers heaped praise on Castiglioni’s designs after the show. Asked for a possible reason for this particularly positive feedback, Castiglioni simply responded: “I don’t know, I also asked myself the same question. Perhaps because it’s very feminine. Or because it has a very clear message. All of the collection had a precise identity. The message must be clear, there’s so much out there.”

Indeed, the collection was consistent with Marni’s aesthetic, yet daring at the same time, and, as Gianni Castiglioni noted, it was “elegant.”

“I don’t follow trends. It’s what I like. It’s our way of working,” the designer underscored. She usually speaks in the plural form when speaking of the brand, to include her close-knit team of seven designers (and three for men’s wear).

Castiglioni credited her instinct, “what you like at the moment,” without agonizing over commercial concerns. Beneath her understated demeanor, one senses strength of character and an independent spirit. “I do listen to [merchandising] unfortunately, but only up to a certain point, otherwise [the collections] become banal if you follow what the commercial office wants. I logically listen to the demands of the market, especially from our stores, but one [should proceed on one’s own path],” she said.

The image of a dress with baguette sequins embroidered on a men’s fabric, prompts a question on a hot topic, given that the interview takes place a day after Gucci revealed it would unify its men’s and women’s shows starting in 2017. Would Marni consider this option? “No, I have never taken this into consideration. For Gucci it works,” said Castiglioni. For Marni, “the taste, the way of seeing things is the same but in men’s you can’t be too decorative. A man is man, and a woman is woman with her more feminine details and decorations. With men’s, [you must design] something particular but credible.”

“It also depends on the message,” added her husband, who is president of the company. “Ours is different, and the message is fundamental when you see so many collections.”

“And to combine the two is very heavy, really, in addition to perhaps diluting or distracting from one or the other,” the designer concluded.

The Castiglionis are equally resistant to the see-now-buy-now option. “No, absolutely, it’s not what we want to do. Marni is aspirational, you must dream about it,” said Gianni. “It’s also an organizational problem and it’s not realistic for us. It would work if you are a retailer. You need to have stock.” The company today counts 60 stores.

Marni’s first season, launched in 1994, was a fur collection, meant to diversify the production of Gianni Castiglioni’s family company, Ciwifurs, a storied fur licensee for several designer brands. “We wanted to do something that would be ours, and retailers, from Joyce to Browns, started asking for apparel to go with the furs, and then accessories, and so on,” said the entrepreneur of the brand’s evolution. Marni is now controlled by Renzo Rosso’s OTB, parent group of Diesel, Maison Margiela and Viktor & Rolf, as well as manufacturing arms Staff International and Brave Kid. In 2015, Marni revenues grew 15.4 percent to 150 million euros, or $166.5 million, compared with the previous year.

While the Castiglionis believe the runway shows are meant for the industry — retailers and the press — they have been opening special events to the public. “We’ve always wanted to do this,” said the designer.

“The idea is for a wider public to get to know Marni, we don’t want to keep [the brand] closed for a limited number of people, but allow everyone to participate,” said Carolina Castiglioni, director of special projects. Examples include the Flower Market, part of the company’s 20th anniversary celebrations that kicked off in September 2014, and the “Becoming Marni” event in collaboration with Brazilian artist Véio at the Venice Biennale last year.

During Milan’s furniture and design trade show Salone del Mobile this month, Marni will transform its multifunctional space into a ballroom named Marni Ballhaus, inviting visitors to discover Cumbia, an ancient Colombian dance. For the occasion, Marni will customize the traditional full skirts worn by Cumbia dancers and the knotted neck scarves worn by the men. At the same time, the company will present its new home collection: chairs, chaise longues, small tables, lamps and vases made of metal, wood and hand-woven PVC cord in brilliant color combinations, all made in Colombia by a group of women who achieved personal independence through their work. A portion of the proceeds from the sale of these items will be donated to the Vimala Association, which supports numerous children’s projects, and is dear to the Castiglionis.

This event follows the launch of Marni’s eyewear in February with the “Looking For Marni” theater event, marking a deeper interest for the performing arts. The dreamy pièce was inspired by Oskar Schlemmer and the Bauhaus movement with dancers wearing Marni costumes and eyewear produced by Marchon. The success of the events caught the Castiglionis by surprise. “Why are they so popular? Maybe because they are special and different but also very accessible — one feels at ease,” observed Carolina.

The designer has also been developing another project. She has tapped artists to photograph her ad campaigns, first the Anglo-American Jackie Nickerson, followed by Tom Hunter for this spring season. Castiglioni is relying on another artist for the fall campaign, but remains mum on the name and details ahead of the shoot. “They are not fashion photographers and the idea is to eventually set up an exhibition of all their images,” she said.

Developing the Flower Market theme, the Marni Flower Café opened in March in Osaka, carrying special branded products, such as lunch boxes, in line with the first theme: the picnic. The designer, who flew to Japan for the opening, said traveling has always been important for her work. “I remember when I went to Bhutan around two years ago, I came back with lots of good ideas. You could see how the sleeves from the summer collection [following the trip] reflected that inspiration,” she said. Consuelo was born in Lugano, Switzerland. Her grandmother hailed from Chile, but she regrets never having had the opportunity to travel to that country — yet. “There are thousands of places to see, so many exhibitions to see, but there is so much work to do…” she trailed off with a smile.