Retail expansion has become a priority for the brand — and the company is on the hunt for a financial partner to support its growth. 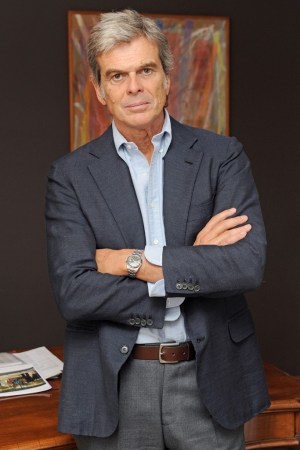 MILAN — Retail expansion has become a priority for Marni — and the brand is on the hunt for a financial partner to support its growth.

This story first appeared in the October 9, 2012 issue of WWD. Subscribe Today.

“We would like to double our sales in five years through a further development of retail, but without drastically overturning our company,” said chief executive officer Gianni Castiglioni in an exclusive interview at the brand’s headquarters here.

Retail accounts for 65 percent of revenues. Castiglioni underscored that growth would have to be in line with Marni’s niche positioning and “given the right opportunities.” Maintaining brand integrity is paramount.

Castiglioni and his wife and creative director Consuelo, equally press-shy and reserved, have been at the helm of the company since they founded it in 1994. Through Consuelo’s quirky designs, filled with artistic references and innovative fabrics, Marni has garnered a cult following.

Gianni Castiglioni, who also heads the family-owned fur company Ciwifurs, said an investor would help Marni expand in countries such as China, where hefty expenditures in brand boutiques are required.

“I would be open to consider a partner only if he would share my vision in managing the company,” said Castiglioni. It is understood that private equity funds are less appealing as their interest is short-term and they expect growth to take place, whether or not the opportunities fit the company.

“We are looking at industrial partners that can provide competence and long-term vision,” in addition to financial support, he said.

The company is expected to close 2012 with sales of 130 million euros, or $167.1 million at current exchange, up 10 percent compared with last year. “We believe this is a manageable growth as a family-owned company,” he said.

Last summer, sources speculated Diesel chief Renzo Rosso was interested in taking a majority stake in Marni, but that Castiglioni was reluctant to relinquish it. Through his holding, Only the Brave Srl, Rosso controls labels such as Viktor & Rolf and Maison Martin Margiela. Asked about the rumors, Castiglioni said he and Rosso are long-standing friends.

An initial public offering is another alternative to achieve more financial muscle, but Castiglioni does not see it happening in the immediate term. “Perhaps in four or five years, when Marni has bigger volumes. The stock market evaluations are also made on growth. When there is a growth project that you can communicate, that’s the moment to go public,” he said.

There is no generational issue as the two Castiglionis are committed to their roles and have no desire to pass the baton. Their daughter Carolina is 31 and is in charge of developing the brand’s online business and special projects, such as the brand’s first fragrance licensed to the Estée Lauder Cos. Inc., due to bow in January. Her brother Giovanni, 25, is in charge of the group’s outlets. That said, Castiglioni pointed to fleshing out Marni’s management as a “desirable” option. “We would gladly accept new managers, as we have several branches in China, Japan and the U.S. which manage retail; we have many activities to handle, it would be great.”

The license with Lauder, which Castiglioni described as a company that is “not invasive,” is the only one Marni has and fits well with the company’s distribution philosophy. Even eyewear is produced in-house, selling about 30,000 pairs yearly.

Accessories, handbags in particular; the Edition line, and men’s wear, especially in Asia, are potential growth vehicles, said Castiglioni. Accessories account for 35 percent of sales, and men’s for 5 percent.

Marni is available at 300 multibrand stores, while the company currently has 100 boutiques, of which 80 are directly operated, in addition to 10 outlets. “Edition is very successful and deserves its own distribution,” said Castiglioni of the line, which was launched two years ago. “It has its own identity, it targets a younger customer, it’s more casual, for daily wear and is priced 30 percent below Marni.” An Edition store opened in Shanghai on Sept. 20. There are also units in New York’s Meatpacking District, which opened last November; Hong Kong, and Tokyo.

The group’s business is balanced between different markets: Japan, Asia, the U.S. and Europe. While Marni is available in the Middle East and Australia, it is not present in South America yet. As for the online business, in a partnership with Yoox, Castiglioni conceded it is fundamental, but warned against losing consistency: “We cannot exaggerate and must grow 20 to 25 percent yearly, no more.”