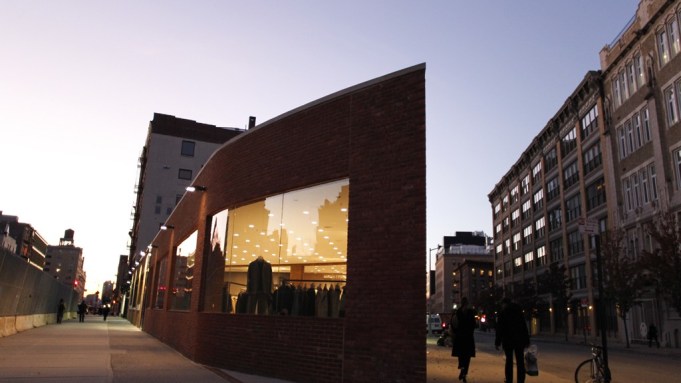 NEW YORK — Marni on Saturday unveiled its first U.S. Edition store at 1 Gansevoort Street in the Meatpacking District here. The narrow 2,500-square-foot triangular building at the confluence of Gansevoort Street and West 13th Street will sell both women’s and men’s. In addition, for spring, the store will launch Marni children’s collection for girls ages 2 to 12. The Meatpacking unit will be the only store in the U.S. to carry the kids’ line.

“This store, I think, is the perfect location for these collections,” said Marni designer Consuelo Castiglioni. “My Meatpacking District and West Village customer is younger and more bohemian.”

The first Marni Edition unit bowed in Hong Kong in August. A Marni Edition concession opened in March at Harvey Nichols. The next Edition stores will open in Shanghai and Tokyo. “If we have a nice opportunity in the U.S., we will consider it,” said Anna Molteni, worldwide wholesale and retail director of Marni.

Edition, which was born two years ago, targets a younger customer with prices that are 20 to 25 percent less than the main collection. “It’s a different attitude,” said Molteni. “It’s a little more casual, with different fabrics, but always keeping the Marni feeling.”

Yohji Yamamoto previously occupied the Gansevoort Street space. The Japanese designer cut a piece off the building to create an outdoor walkway and separate stockroom. Marni united the two buildings, turning the smaller section into an open stock area that’s visible from the store.

“The idea is to dress an existing place to give it an identity for a set period of time,” said Castiglioni, who relishes the transformative nature of stores. “Our stores don’t have window displays,” said Molteni. “The steel box is like a window display for us.” Molteni was referring to a steel box painted fuchsia inside, with a neon orange chair displaying handbags, vests and scarves. From the street, people can see the “display window in a box.”

Steel boxes — larger, rectangular, vertical and movable — are used as dressing rooms, with a burst of fuchsia inside. Throughout the store, the circle, dots and spheres are recurring themes. Fixtures are rounded, metal screens have small holes like dots and accessories displays are made from perforated metal.

A video by the artists Marco and Saverio Lanza of Pastis captured the genesis of the Edition project. When Castiglioni saw the video, she liked it so much she had it made into wallpaper, which covers the front wall of the store. “We’ll be showing the film here,” Molteni said.

Fiberglass model forms are dressed in some of Edition’s most eclectic pieces, such as a jacquard mohair coat for $1,480 and a silk twill dress in a Floral Dream print for $1,145. Hangers are covered with wrinkly muslin that’s been washed and starched and looks like a piece of papier-mâché sculpture. “It takes the commercial aspect out of the price,” said Molteni. “It’s the essence of all these little details.”

Marni is also working on a fragrance, Molteni said, and a spring project called Recycle will produce necklaces.