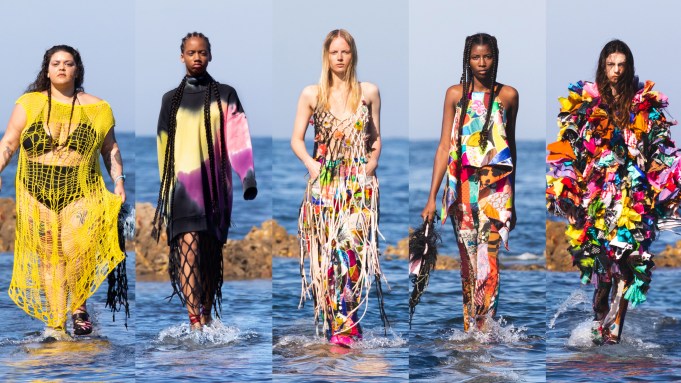 Fashion label Marques’ Almeida, which had adopted a more flexible and innovative way of showcasing prior to the COVID-19 pandemic, released its fall 2022 collection Thursday. The show was streamed live via the brand’s Instagram account and Matchesfashion, and pieces were instantly shoppable.

Marta Marques and Paulo Almeida, the duo behind the LVMH Prize-winning label, reaffirmed that showing the collections when they are delivered makes more sense for the brand.

“To us, we don’t feel comfortable fitting in with a rigid system and way of working,” added the couple, who studied together at London’s Central Saint Martins under Louise Wilson.

The runway show saw models walking through shallow seabeds, as if they were walking between the sea and sky. It was filmed at the scenic Viana do Castelo in the Minho region of Northern Portugal.

“It was very important to us to find a setting where there was an authentic aquatic beauty and nature surrounding us, as the fall 2022 collection was inspired by our time in the islands of the Azores in the Atlantic Ocean,” the couple said in an email interview.

The collection offered a great lineup of fashion featuring variations of the brand’s signature distressed denim, size-inclusive knits, tie-dye tops, patchwork dresses, as well as beautiful fabrications from female artisans from the Azores as a part of the brand’s M’akers mentorship project, which aims to empower local communities and preserve ancestral knowledge.

The artisans who contributed to the show are: Aldevina Serpa, an artisan specializing in patchworking, Sofia Afonso, an artist using fish scales and limpets for her creations, Sónia Bárbara from the label Sol e Brumas who makes giant hats with traditional patchwork techniques, and Fátima Ferreira, an upcycling artist who makes rugs with leftover fabrics from textile factories.

The duo decided to showcase concept pieces from the M’akers project together with the main collection because they wanted to use the brand as a platform to help raise awareness for those who don’t have a voice in the fashion or arts industries.

They noted that M’akers falls under the umbrella of work created from its environmental and social manifesto, which also includes Re’made, a collection made fully from deadstock, and See-Through, the brand’s digital magazine.

“The inspiration for the collection and the development of M’akers happened organically, as when we traveled in the Azores, we met many creative people and we talked about craft and how much we need to treasure and cherish these traditional craft techniques,” the duo said.

“The M’akers are incredibly always led by women who are central to their communities. These women carry the load of taking forward these traditions and techniques into the future. We wanted to be part of that and to help to modernize them, to make sure these traditions are not lost,” they continued.

The two observed that people who work on the front line of the fashion system like these makers and crafters are rarely talked about, or celebrated.

“So the idea was to find them, give them praise and power, and learn from them,” the duo added: “We were surprised by how engaged we were and how much they inspired us and changed the way we work. They became fully central to how we saw the fall 2022 collection but also the pieces were central to the show, the first four looks in the show all included actual pieces which are one-of-a-kind and which are part of this research project.”

The duo said the goal of the M’akers mentorship project, ultimately, is to map out all the artisanal techniques in Portugal and elsewhere in the U.K. and Europe, if funding is secured.

A Homecoming, and a New Chapter for Marques’ Almeida